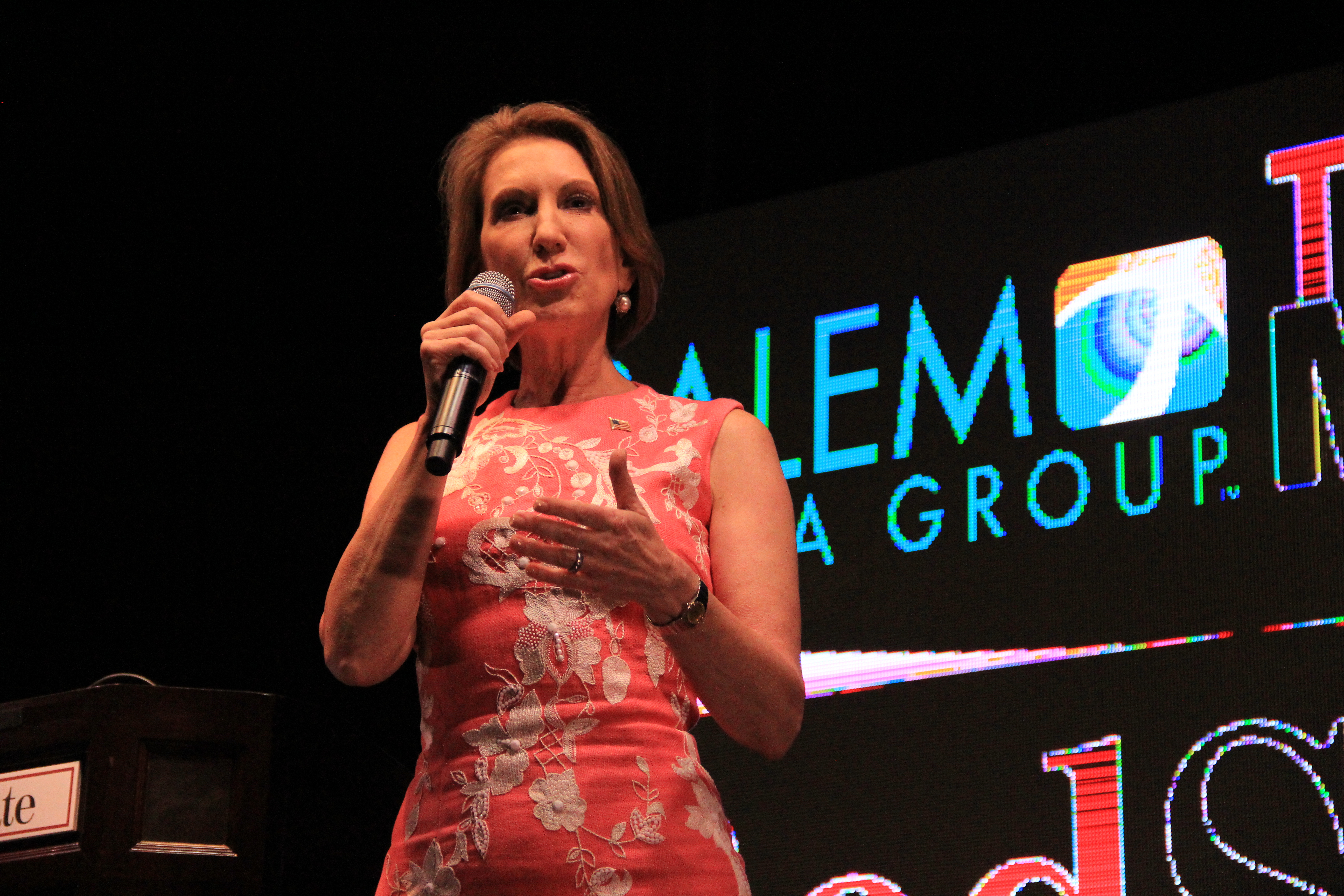 WASHINGTON — Daniel Moughon, an insurance salesman from Fort Worth, Texas, said he knew long shot Republican presidential candidate Carly Fiorina was special after listening to one of her early Iowa speeches. He’s donated to her 10 times since then.

Moughon is not giving millions, though. He’s not even giving thousands.

In fact, he has added $273 to the former Hewlett-Packard CEO’s campaign coffers through small donations ranging from $7 up to $100. 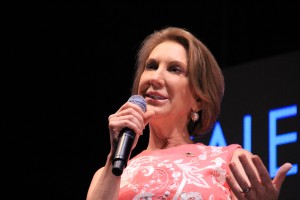 Carly Fiorina at the RedState Gathering. Photo by Emily Hoerner.

Here’s why: “Well, one, you can’t trust elected Republicans, they’ve let us down time after time,” Moughon said. “Carly Fiorina has a clear message. She’s a true outsider and a true proven leader.”

Outsiders are doing well with small-dollar donors this campaign season.

By end of the last filing period, June 30, Republican presidential hopeful Ben Carson’s campaign had raised $10.6 million, three quarters of which came from donations under $200, according to the Federal Election Commission.

Sallie Barreca, a grandmother from St. Louis, has given to Carson 33 times, for a total of $1,532. She said she likes the retired neurosurgeon’s up-by-the-bootstraps story, his patriotism and his ability to stay cool under pressure.

“I’ve corresponded with a good friend of mine and we both feel this way,” Barreca said. “We will continue to support him until we think he doesn’t have a chance. … We’re all in the game here.” 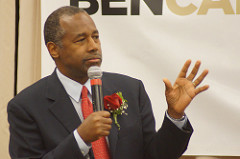 Fiorina has pulled in almost $1.7 million for her campaign, more than 45 percent of which came from donations under $200, with an additional $1.9 million in outside money raised since 2014, according to the most recent FEC filings.

Theoretically, existing donor networks should give an edge to candidates who have held public office, experts say. But Louisiana Gov. Bobby Jindal and former Pennsylvania Sen. Rick Santorum have raised just roughly $600,000 each, according to the FEC.

While dollars continue flowing into Fiorina’s and Carson’s campaigns amid low polling, an array of GOP strategists and political scientists say the two outsider candidates don’t stand much of a shot at actually being the Republican presidential nominee.

O’Connell said that while Fiorina and Carson tap into a group of conservatives who are fed up with Washington, some political experience is necessary.

“Republicans are more about ideology than a lot of other things, but they also like to see someone have a track record,” O’Connell said.

Listen to voices of donors talk about Carson and Fiorina’s chances of becoming the Republican nominee.

“They don’t really have any of the fundamental signs that you are a serious candidate,” he said. “Both are really, for the first time, introducing themselves.”

“How many of them actually ended up being successful?” Johnson said. “Not many if the goal was to actually participate in government.”

So why are small-dollar donors giving to these long-shots?

Johnson said small donors are similar to sports fans. Even though the Cleveland Browns football team may have a losing record, fans still pay to watch them play. Donating to a candidate that represents your ideals is similar, he said. 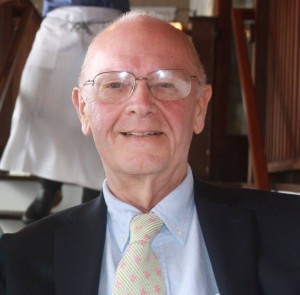 Keith Bradley, a Cape Cod realtor, has donated at least $225 to Carly Fiorina’s campaign. “Can you imagine the stamina it takes just to be out there all the time, especially with people, you know, not taking you seriously and focusing on all the other candidates?” he asked. Photo courtesy of Keith Bradley.

Keith Bradley, a realtor from Chatham, Md., who has donated to Fiorina nine times at $25 each, said her speech on foreign policy at the Ronald Reagan Presidential Library “spine-tingling.” He even saved the speech so he could watch it again.

Support for Carson runs deep too. Barreca, the grandmother from St. Louis, acknowledges Carson is a long way from being elected. His “mellow” personality appeals to her.

“That’s what I like about him,” she said. “Now in a field of loud talkers, I don’t know that he’ll be heard that well.”

Mary Cole, a retired librarian, said she gives Carson a monthly donation and attends weekly prayers for the success of his candidacy. She said the retired doctor’s message aligns with her beliefs, and has given him $840 so far.

Michael Malbin, executive director of the Campaign Finance Institute in Washington, said that unlike large-dollar donors who often give for access to the candidate, small donors who connect with a candidate’s message usually don’t expect anything in return.

“…They have no reason to think there’ll be any quo for the quid. If they’re lucky, they’ll get a bumper sticker,” Malbin said.

Smaller donors and voters do indeed have more leverage than they used to in the nominating process, said Geoffrey Skelley, associate editor of Larry J. Sabato’s Crystal Ball.

“You don’t have party bosses and smoke-filled rooms deciding everything like you might have had back in the day,” Skelley said.

Still, party backing is crucial and a lot of voters underestimate its importance, he said. More party support means more resources, including television ads and endorsements from local leaders, he said.

“It means a lot, those endorsements, in terms of opening doors for fundraising, showing strong support from your own party,” Skelley said.

Political scientists say non-political connections between candidates and donors also matter. David Magleby, a professor of political science at Brigham Young University, said in local elections, a realtor might vote for a fellow realtor because there could be some collective benefit.

“You do this fundraising based upon networks, relationships and shared identities,” Magleby said.

For Cole, the retired librarian, Carson’s story is relatable. Like the doctor who grew up poor in Detroit, Cole’s parents didn’t have much money. The elementary school she attended in Baltimore didn’t have a library, so Carson’s scholarship program and efforts to establish reading rooms in schools across the country mean a lot.

“I really think that Carson has strength because of his life experiences…” Cole said. 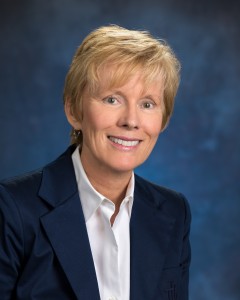 Susie Hoeller, a Florida lawyer, said her past work as one of the few women at Texas Instruments in the 1980s and ’90s makes her identify with Carly Fiorina’s career breaking the glass ceiling at Hewlett-Packard. Photo courtesy of Susie Hoeller.

Susie Hoeller, a Florida attorney who worked in the 1990s at Texas Instruments, said she admires Fiorina for breaking the tech industry’s glass ceiling. Hoeller followed Fiorina’s corporate career and even purchased one of her books before she became a candidate.

“In my era, the Baby Boomers, someone like Carly was much more unusual than women today,” said Hoeller, who has donated $225 to Fiorina’s official campaign and more to her PAC. “She was a real trailblazer.”

Ask the experts about funders of political underdogs and a few classic examples inevitably surface.

Sheldon Adelson, the casino mogul, backed former speaker of the House Newt Gingrich in his troubled 2012 campaign for president.

And mega-donor , Haim Saban, an advocate for Israeli security, gave to Hillary Clinton all throughout her 2008 campaign, refusing to back down as then-Sen. Barack Obama rose to party prominence.

By sustaining the campaigns past their natural breaking point, these deep-pocketed donors helped emphasize the issues that matter most to them, said Malbin, the campaign finance expert.

The ideological motivation is often the same for small dollar donors, according to Malbin. The difference, he said, is that large-dollar donors tend to give with some personal gain in mind– like improving their access to the candidate.

People who give smaller amounts seem to understand that they won’t get likely influence campaign strategy. Candidate viability may not matter much either, at least initially.

“Portions of the public often believe that long-shot candidates actually have a shot, provided they have enough funding, which is where their donation comes in,” said Dino Christenson, an assistant professor of political science at Boston University, in an email exchange.

Daniel Gorman, a Fiorina donor from Winter Park, Florida, who has given $750 to her campaign, said he supports the former CEO in part because he thinks she could stand up to Clinton, the other female force in the 2016 race. While Gorman believes Fiorina could win the nomination, he said she needs to get her name out.

“I mean, she wasn’t known to too many people,” Gorman said. “And hopefully the donation can help her do that.”

At some point, money is not enough to carry a campaign.

“You can’t win without it but you can certainly lose with it,” said Corwin Smidt, assistant professor of political science at Michigan State University.

Once more voters start paying attention to the presidential race, candidates can lose steam if they aren’t making a big showing in Iowa and New Hampshire, Smidt said.

Magleby said the pace of the campaign changes after the first few caucuses and primary races, dooming some of the hopefuls.

“Roughly half of these campaigns will have largely dried up,” he said.

Barreca from St. Louis hasn’t wavered in her support for Carson, who she said is the best candidate to take care of the country for her family.

“I will definitely keep supporting him because he’s done well in Iowa, he’s rising,” she said. “He’s definitely worth listening to.”

Polls in Iowa have Carson in second place behind Trump, and Fiorina in fourth. So, for now, Barreca’s efforts may be paying off.