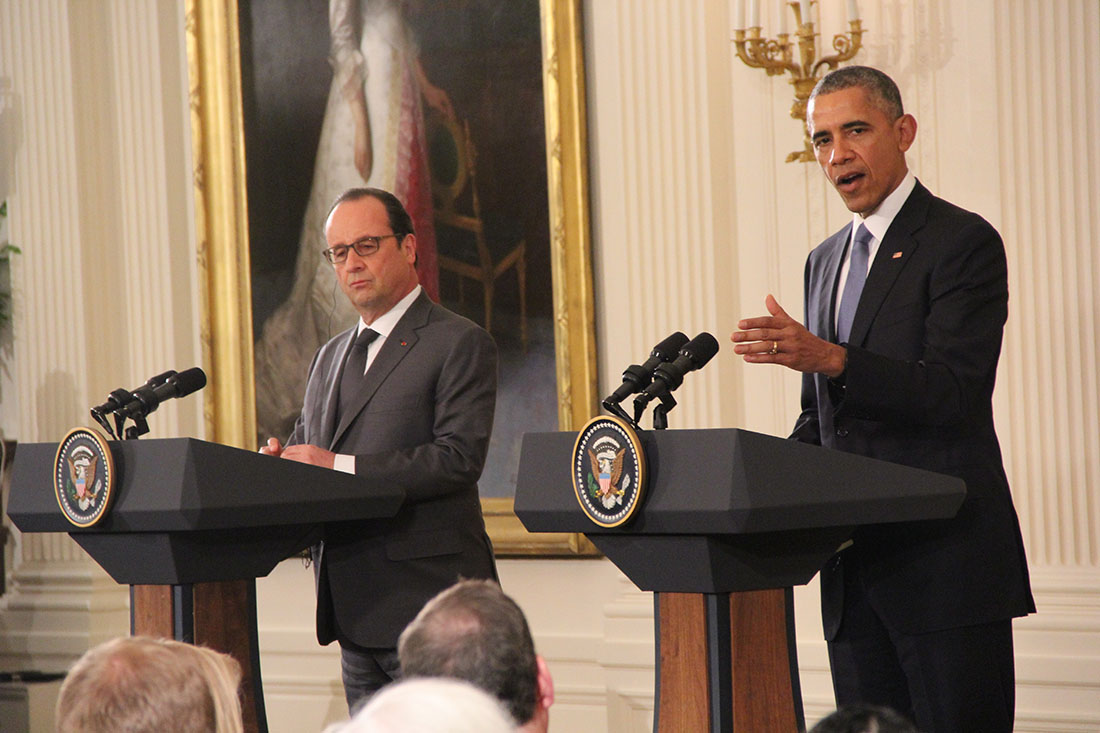 WASHINGTON — President Obama and French President Francois Hollande are seeking to temper fears of escalating tensions between Russia and the West by asking President Vladimir Putin to join a coalition to fight the Islamic State.

Speaking Tuesday at a White House press conference after a private meeting with Hollande, Obama said he would welcome Russia joining Western nations in the fight.

But he also defended Turkey’s actions in shooting down a Russian fighter jet that the Turks claim veered into their airspace earlier in the day.

“Turkey, like every country, has a right to defend its territory and its airspace,” Obama said, while again noting that keeping tensions between Turkey and Russia from escalating is a “top priority.”

Obama said Russian support for Syrian President Bashar Assad remains a barrier to a unified approach to attacking and defeating the Islamic State.

“This barbaric terrorist group, in its murderous ideology, poses a serious threat to all of us,” he said. “It cannot be tolerated. It must be destroyed and we must do it together.”

Hollande is visiting a number of countries to ramp up the fight against the Islamic State, also known as ISIS or ISIL, which took credit for the Paris bombings that killed 130 people earlier this month. He is scheduled to meet with Putin as well as leaders of Canada, Italy, China and Germany.

During the press conference in the White House East Room, Hollande and Obama spoke of intensifying the battle against ISIS in a show of solidarity, often hugging and shaking hands.

“Sometimes we Americans are too shy to say so, but we’re not feeling shy today. We Americans love France because we dedicate ourselves to the same ideals,” Obama said.

In the French president’s first visit to the U.S. since the Paris attacks, Hollande expressed gratitude for the broad showing of support by Americans who displayed the French colors and lowered U.S. flags to half-staff. He also reiterated the need for increased solidarity among all nations fighting ISIS, including Russia.

One of the main sticking points holding up Russia’s involvement in the 65-nation coalition against ISIS has been its longtime support for the Assad regime in Syria. The U.S., France and a number of other countries believe removing Assad from power is crucial to reaching a peaceful solution in Syria and strengthening the fight against the Islamic State.

“We cannot imagine the Syrians getting together, gathering around the leader who is responsible for most of the 300,000 dead in a few years,” Hollande said. “So a government of unity is required, but that must lead to Assad’s departure.”

Obama also called on Russia to end its independent military operations in the Syrian region.

“We’ve got a coalition of 65 countries who have been active in pushing back against ISIL for quite some time,” Obama said. “Russia right now is a coalition of two: Iran and Russia supporting Assad.”

In a conversation during peace talks in Vienna last week, Obama urged Putin to refocus on targeting ISIS instead of the Syrian rebel groups and others opposing Assad, facilitate a political transition for Assad and cooperate with the Vienna peace process.

“Until that happens, it’s very difficult,” Obama said of the Syrian situation.