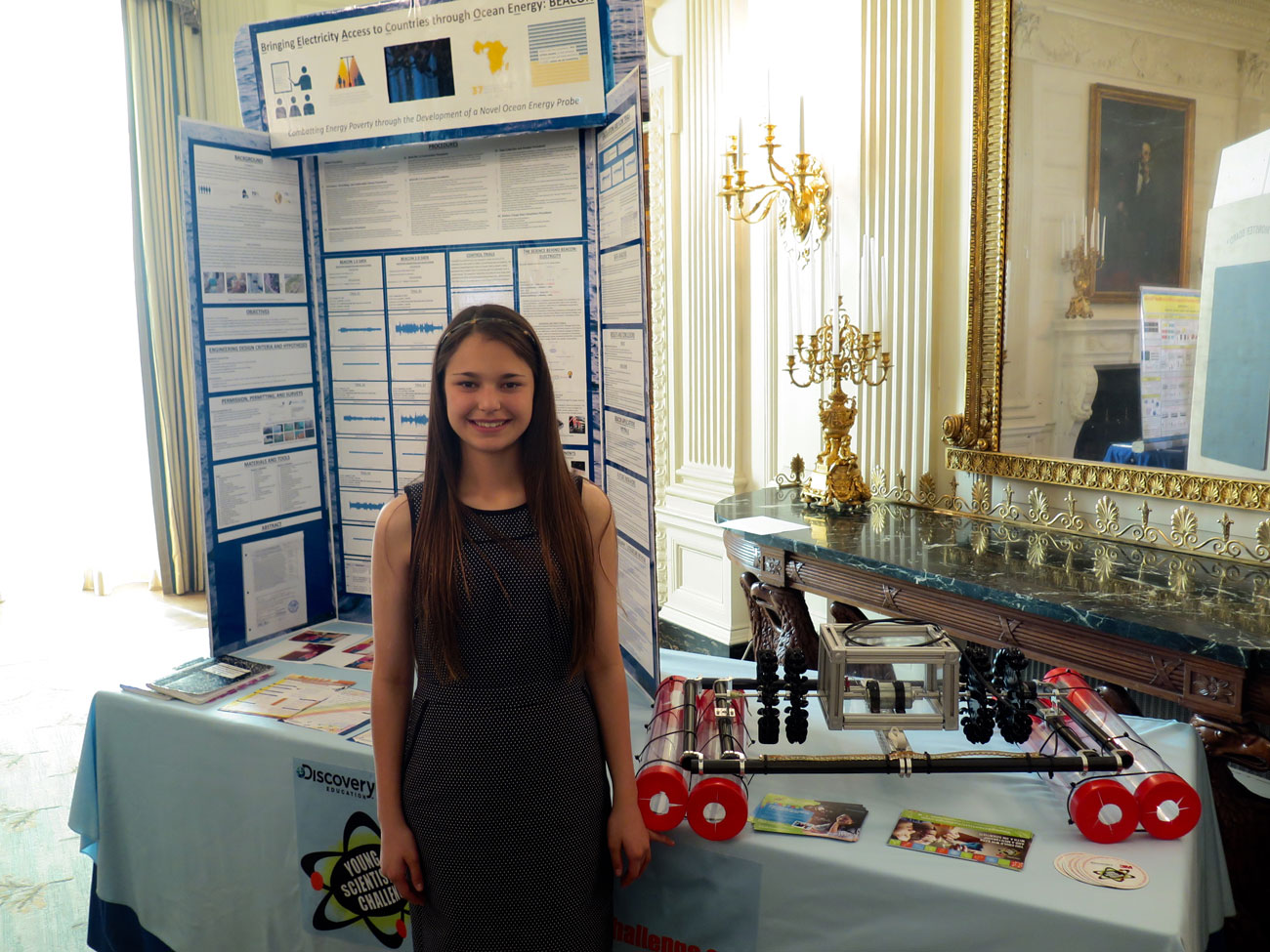 WASHINGTON — When Boca Raton high school student Hannah Herbst found out her Ethiopian pen pal lived without electricity and running water, she knew she had to do something. So began her quest to build a small and affordable alternative energy source that could help generate power in developing countries.

“Everything that I’m fortunate to take for granted every day she doesn’t have access to,” Hannah recalled in an interview.

On Wednesday, Hannah presented her prototype, BEACON (Bringing Electricity Access to Countries Through Ocean Energy), at the annual White House Science Fair, the sixth and final such event of President Barack Obama’s administration, where enthusiastic young exhibitors demonstrated a wide array of inventions from a less expensive test for Ebola to a more fire-resistant suit for firefighters.

BEACON uses what’s known as a Pelton wheel system – a water turbine – connected to an AC generator to convert the energy produced by ocean currents into electricity. If scaled up, BEACON could power a desalinization pump or a 12-volt battery. For now, Hannah is focused on making many, smaller-scale units.

Unlike existing turbines that are often huge, expensive and operate on the ocean floor, Hannah’s model is cheap and floatable, so anybody can use it. She made one iteration out of recyclable materials for only $12.

Hannah sent $3,000 of her $25,000 winnings to Compassion International, the nonprofit that connected her with 9-year-old Ruth and her family in Dessie, Ethiopia. A couple of weeks ago, Hannah received pictures of the generator they bought with the money. The family also was able to pay some medical bills.

Until her parents, Joel and Julie Herbst, switched her from theater to engineering summer camp in the seventh grade, Hannah hadn’t shown much interest in science. As a newcomer to the field and the only girl there, she felt intimidated at first. But she caught on quickly, and her team won the camp’s weeklong competition.

“We’ve got to get more of our young women and minorities into science and technology, engineering and math, and computer science,” Obama said Wednesday. “We’re not going to succeed if we got half the team on the bench.”

Hannah has since made it part of her mission to encourage other girls in science and math.

It’s hard to be in such a male-dominated field, “but once you realize that you can make a difference regardless of gender or any of those other stereotypes, then you’re fine,” she said.

The young scientist is working to introduce elementary and middle school students to what’s known as STEM – science, technology, engineering and mathematics –and help them develop kits of her first prototype.

Recently, Hannah teamed up with 3M, the conglomerate based outside St. Paul, Minnesota, to figure out how to bring BEACON to market. While she realizes that her dream is still a way off, she hopes one day to be able to give a version to Ruth and her family.

Over the summer, Hannah plans to work on her design to make it more powerful – before she starts full-time college classes at Florida Atlantic University in the fall. She wants to join the thespian society as well.

“No matter how difficult things seem or how much you think that you can’t do it based off what other people say, you just have to keep going,” Hannah said. “Never give up, because something could really impact someone’s life in a way that you can’t even imagine.”