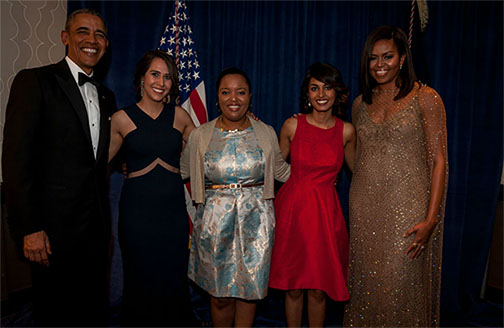 WASHINGTON — Three Medill School of Journalism students who were awarded scholarships by the White House Correspondents Association, mingled with celebrities like Will Smith, Kerry Washington and Rachel McAdams at am invitation-only reception with the Obamas on Saturday night at the WHCA annual gala.

Jasmine Ellis, Misha Euceph and Emiliana Molina are in the master’s program and each received $5,000.

“Jasmine Ellis of Audubon, Pennsylvania, and Emiliana Molina of Medellin, Colombia, are the winners of the Deborah Orin Scholarship, named for the late White House correspondent and Washington bureau chief for the New York Post. Each winner will receive $5,000. Jasmine decided to attend Medill to hone her skills as a political and social justice reporter. …  Upon graduation, Ellis will continue to cover social justice issues and politics in the hopes of becoming a White House correspondent. Emiliana arrived in the United States under a grant of political asylum and now is pursuing a master’s degree at Northwestern. … Emiliana has interned for NBCUniversal/Telemundo 15 and worked at iHeart Media.  She hopes to become a political reporter.

“Misha Euceph of Rawalpindi, Pakistan, is the recipient of a $5,000 grant through the WHCA to help finance a post-graduate degree for a student in the Government and Public Affairs reporting track. Misha is a Chicago-based radio broadcast journalist. She is pursuing a Masters of Science in journalism at Medill where she specializes in social justice, political and investigative reporting. She also works for the podcast, The City, part of WNYC.”