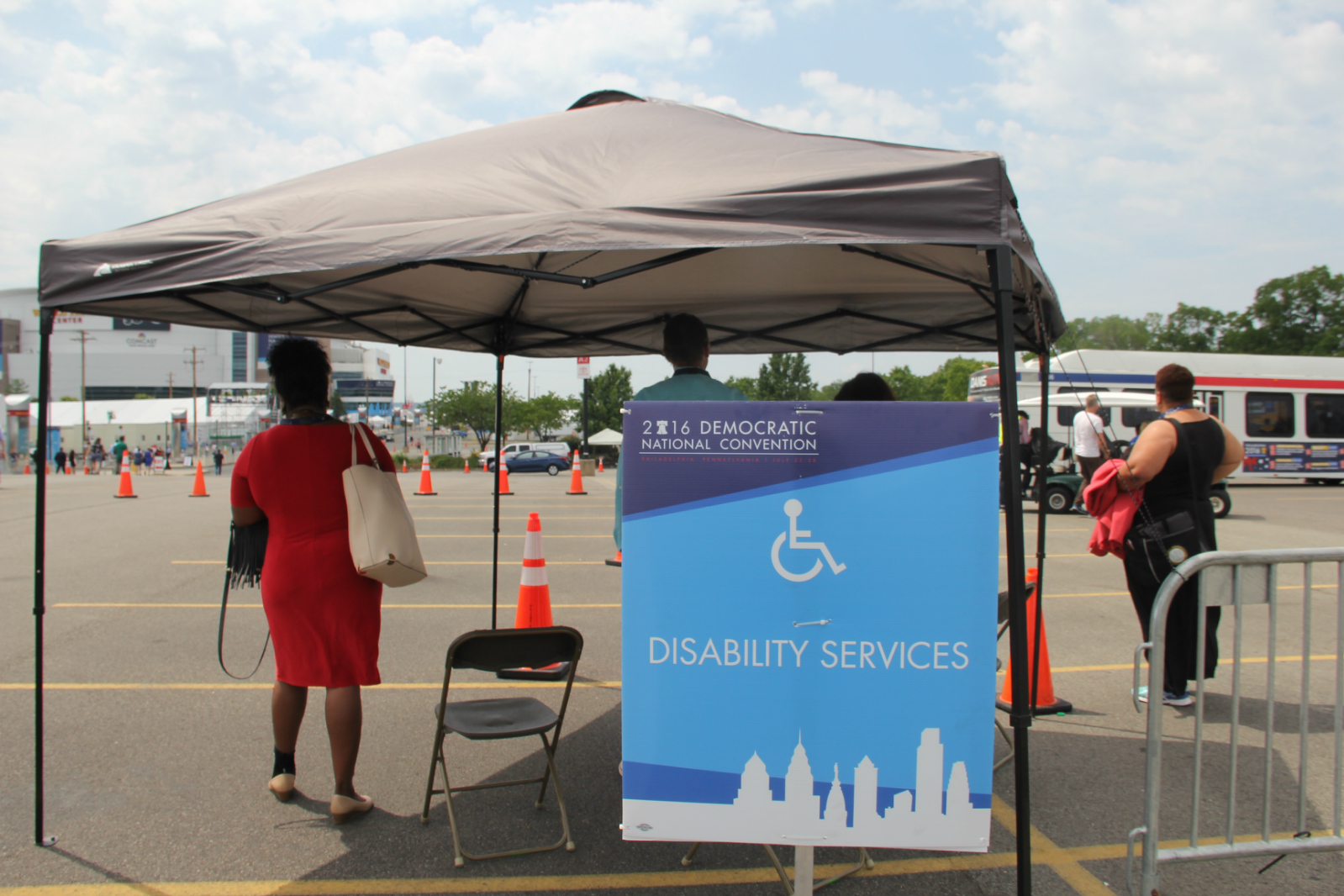 PHILADELPHIA—When disabilities rights advocate Anastasia Somoza said “I’m confident that as our president Hillary will do everything in her power to promote the rights, empowerment, and humanity of all Americans,”  Kirk Roost thought, “It’s ironic”.

Kirk has been upset with the American Disabilities Act assistance at the Democratic National Convention, and other handicapped delegates shared the same concerns.

“In this regard, the DNC itself has failed me,” said Roost, a 27-year-old Florida delegate who has cerebral palsy.

Roost traveled by himself to Philadelphia, his hometown, excited to be going to the Democratic convention at the Wells Fargo Center.

But when he got to the security clearance area outside the arena at the start of the convention, he said, it quickly became apparent that the actual assistance did not match what officials had told him before he left Florida.

The first trouble spot appeared quickly. There was no cut-out in the sidewalk curb at the security entrance, which is against ADA standards, he said. Other delegates lifted him over the curb. Roost then asked the DNC to assign him a volunteer to get around, but was told the ADA assistance office didn’t “have the resources to do that,” said Chris Riker, another  Florida delegate who helped Roost get into the arena.

The DNC  “has made accessibility an integral part of all aspects of convention planning … from transportation and housing to designing the traffic flow at Convention events,” according to its website. It lists help in transportation, access to the arena floor and a myriad of other services.

On Wednesday, the wide doors designed for disabled access to the Wells Fargo Center were closed, with no volunteers on hand, Riker said.

The DNC provides golf carts for delegates to get from security checkpoints to the Wells Fargo Center, but there were not useful for a number of handicapped delegates.

“In my case, my wheelchair sort of makes that not viable. The frame of my chair is at least 100 pounds,” said Root.

But some disabled delegates were OK with the situation.

California delegate Martha Acevedoa, said she doesn’t mind using a wheelchair to get to the convention center, but didn’t know she could get one from the DNC.

Other delegates complained about the delivery of assistance information and access to ADA consultants at the convention.  The DNC provides a request alert texting assistance, but none of the delegates interviewed were aware of it.

“It’s not publicized or well-known to the people in general, ” said Acevedo.

DNC officials said they tried to ensure delegates from same state sat together, but that was not always the case for delegates in wheelchairs.

Rinaldi had to sit with the Washington state delegation because the Vermont people were situated on an upper level without ADA wheelchair access options.

“I did feel isolated from my delegation…” she said, adding that other non-Washington disabled delegates sat in the same area with her. “They could have easily figured out which delegates needed wheelchair access and match them with their state delegation. I don’t think it’s too hard to do… They need to make sure we are comfortable where we are and have the best experience that we can have.”

Roost said a disabled Texas delegate was assigned a spot with him in the Florida delegation.

“I don’t think that’s right. I think she should sit with her delegation, ” said Root. “I’ve got lucky that they put all of our delegation all over in one corner (so that I can stay here).”

Rita Roberts, a North Carolina delegate who uses a wheelchair, said she does not mind being separated from her delegation, then started calling to her fellow North Carolinians across the hallway to get their attention.