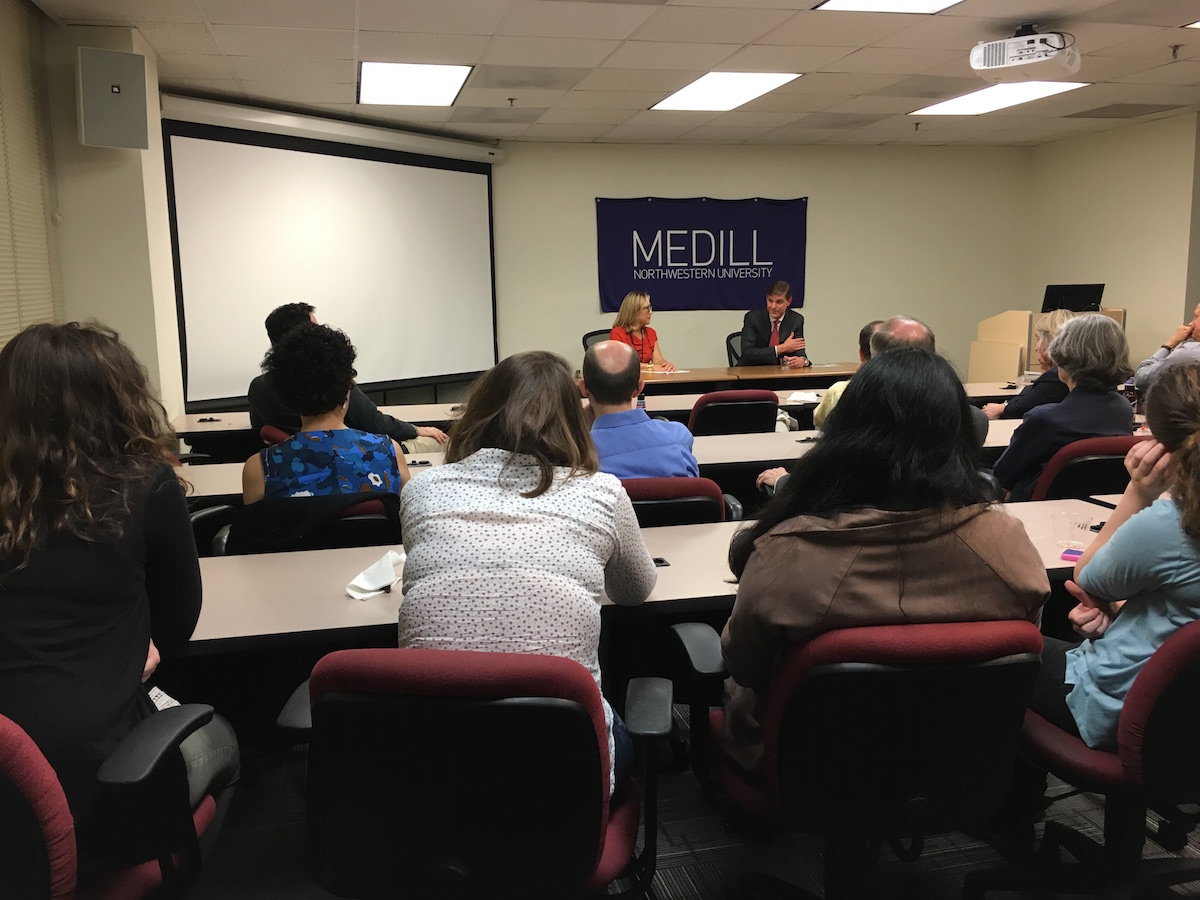 Assistant Secretary of Defense, Pentagon Press Secretary and – most important – Medill MSJ. alum Peter Cook paid a special visit to the Medill Washington newsroom to discuss his journalism journey and the hot topics in national security in his new job on Oct. 6.

The event, hosted by the Medill Club of Washington and the Medill National Security Journalism Initiative, D.C., gave the crowd of students, alumni, industry professionals and at least one U.S. military veteran a chance to get to know the man behind the press podium during a discussion with Medill Washington Program Director and Bureau Chief Ellen Shearer.

Cook, who graduated from Medill in 1991, took a less-traveled road to the Pentagon. His first post-grad gig was a weekend anchor/reporter position in local TV with KIFI News Group in Idaho Falls, Idaho, followed by similar stints near Roanoke, Virginia, and Raleigh-Durham, North Carolina. He arrived in Washington in October 2000 as a bureau chief and managing editor at EnergyNewsLive.com. Next came a position producing and reporting Defense Department coverage for NBC News in 2003, followed by the position he held the longest – chief Washington correspondent at Bloomberg TV, where he spent over 11 years before moving to the Pentagon last year.

“This is a unique opportunity at a really dicey moment in the world, and I’m not going to be bored,” Cook recalled thinking while deciding whether to Bloomberg for public service at the Pentagon.

In his new job, Cook said, he gets out his “reporter hat” every time he preps for a press briefing and attempts to anticipate the same kind of hard questions he’d have lobbed at Pentagon press secretaries.
But the most obvious carryover from Cook’s reporting days may be his dedication to DoD transparency, which he said is evidenced everywhere from the ease with which credentialed reporters may roam the Pentagon’s halls, to a tenacity with which he pushes for the release of pertinent information to the public so long as it won’t impede operational security.

“We have the huge responsibility to tell our story to the American people,” he said.