WASHINGTON—Demetrius Palmer waited two hours in the dark early Friday to light up.

Finally, at about 8 a.m. the Akron, Ohio man pushed his wheelchair across the sidewalk to be the first in a long line of protesters to receive a free joint from DCMJ, a pro-pot group that had prepared more than 8,400 joints to give away during the inauguration.

“I’ll smoke it in good health,” Palmer said as he wheeled away.

While other protesters around town were faced with tear gas as Inauguration Day wore on, DCMJ’s protest, called Trump 420, was a decidedly more mellow demonstration.

Activists gathered at DuPont Circle to promote the legalization of smoking in public, as well as protest President Donald Trump’s pick of Sen. Jeff Sessions as attorney general. Many worry Sessions will roll back marijuana legalization laws passed across the country.

Marijuana was decriminalized in the city of Washington in July 2014 and, about a year later, it became legal for adults 21 years and over to possess up to two ounces of marijuana and cultivate up to six plants in their home. Legislators have decriminalized marijuana in 21 states.

“We have Trump supporters handing out marijuana, we have Hillary supporters, people who voted for Bernie, and people who didn’t vote at all,” said Adam Eidinger, a long-time D.C .activist and organizer who has been arrested more than 19 times. “This is a really passionate group of people—it looks like a Norman Rockwell painting over here.”

Wearing a “Make America Great Again” hat and sporting a “Deplorable Lives Matter” pin, Ryan Jones, 20, was one of the Trump supporters who added some Republican red to the crowd. The Mount Laurel, New Jersey man arrived in town to celebrate the inauguration, but was curious about the “Trump 420”demonstration.

Despite being under the legal age to receive cannabis, the desire for a free joint also drove Jones to the demonstration.

“This is a very bizarre offer, but I’m excited to try and take it up,” Jones said. 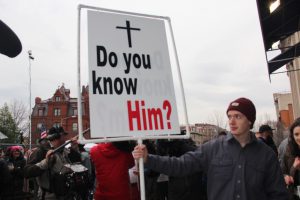 The one person who didn’t seem excited about protest was Scott Marble.

The Richmond, Virginia man arrived at the demonstration holding a “Do you know him?” sign decorated with a Christian cross.

“Instead of telling them what not to do, I want to tell them there’s something better. I want to share with them God,” Marble said.

Not many of the activists seemed receptive to Marble’s message, but he was hardly alone in his use of creative signage. Colorful costumes, masks and posters added a festive atmosphere to the Trump 420 demonstration. Some parents even brought children.

After about two hours of mingling, smoking and passing out joints, protesters marched to the National Mall, where about 100 lit their free joints and illegally smoked at four minutes, 20 seconds of Trump’s inaugural speech. No one was arrested.

“We have to solve the small issues first, and this is an easy fix,” Eidinger said. “Legalization is easy to do, it takes political will—that’s what’s hard to do. But, legalization is easy. If [politicians] can’t do this, they’re not going to be able to do anything else.”