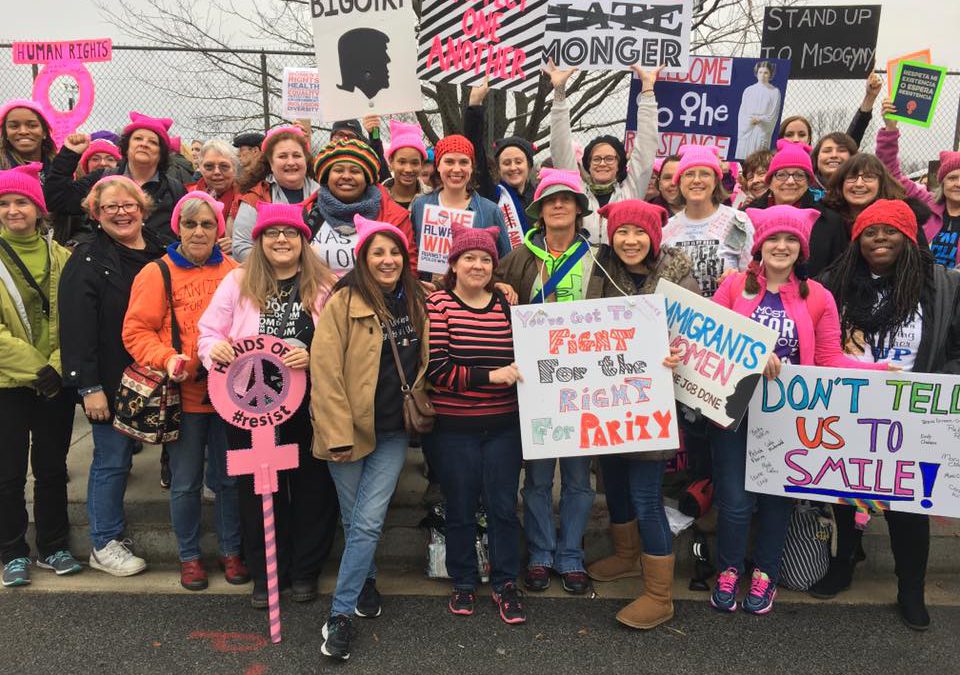 Ana Maria Rosato (center brown jacket) and other Mississippians traveled to Washington for the Women's March.

WASHINGTON – A group of about 30 Mississippians who fear for women’s equality and America’s independence from foreign influence joined the sea of women in pink hats Saturday as they carried signs reading “Stop Bigotry” and “Don’t Tell Us to Smile” at the Women’s March.

The women left Jackson Friday, picked up another two dozen women in Louisiana and arrived in Washington early Saturday, then headed to the National Mall.

Ana Maria Rosato, a Bay St. Louis native, said she decided to make the trip because “I’m a patriot, I’m a Democrat.”

Rosato was “appalled that the individuals that have moved into our White House are cozying up to (Russian President) Vladimir Putin.,” she said “That is appalling to me and unAmerican.”

She criticized the Mississippi Republican leadership for “championing a man and a party that is pro-Putin.”

She also wants to show President Donald Trump that she and many other women support women’s rights, voting rights and the Black Lives Matter movement.

“The energy in the area is electrifying,” she said as the hundreds of thousands of women and men who had listened to a morning of speeches supporting a variety of issues began their march to the White House from the National Mall.

In addition to the Women’s March in Washington, women in hundreds of cities in the United States and around the world held their own marches aimed at ensuring that Trump knows they don’t agreed with many of his policies, especially social policies. In Mississippi, women marched in Gulfport, Jackson and Oxford.

“I am thrilled that women and men of all backgrounds across the nation are going to areas that are closest to them, standing up for the mainstream progressive American values that we all hold dear,” Rosato said. “I believe what comes out of this will be great, too. I think it means that everyone will be far more engaged politically in their own backyard.”

Donna Niewinroski of Oxford, who was on the bus with Rosato, added, “We’re all in this together.”

She stressed the importance of showing that women care about many issues, not just those that only affect women. “The platform for this march has a number of different reasons,” she said, and they are all valid.

“Each one of us has our own reason,” said Niewinroski. “The protections of women’s reproductive rights are, of course, way up there for me, and (Trump is) coming off as a dictator. It’s scary. I’m scared.”

But she did not one common concern shared by everyone at the march.