WASHINGTON – Hundreds of protesters clashed with police  and set a limousine on fire Friday evening on the street off Franklin Square, a few blocks from the White House, amid shouted demands that President Donald Trump to be impeached. 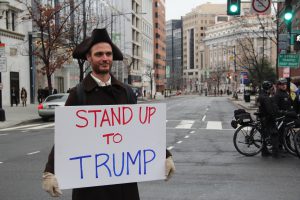 A protester holds a placard a few blocks from McPherson Square. (Shahzeb Ahmed/MNS)

Shouting slogans of “Whose streets, our streets,” and “F**k Trump,” the protesters waved sticks and threw bricks at the police, who then charged the protesters and fired tear gas shells and rubber bullets, forcing them to disperse, if only momentarily.

Several people were injured in the clashes. 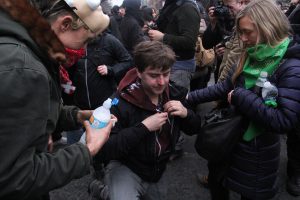 A protesters tries to wash the remnants of tear gas from his eyes as others help him. (Shahzeb Ahmed/MNS)

The violence began while a largely peaceful gathering of protesters was going on at the heavily guarded McPherson Square. A few people started drifting down the street to the corner of 14th and K Streets, where they set alight a parked Lincoln limo. 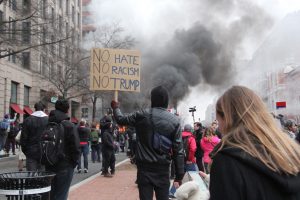 Brian McPherson, 53, who is a medic at a hospital in New York City, said his colleagues had treated several people who had sustained minor injuries. “I am a medic by profession and came here to help the protesters in case they got dehydrated or injured,” he said. “It has been largely peaceful but there were some skirmishes here and there.” 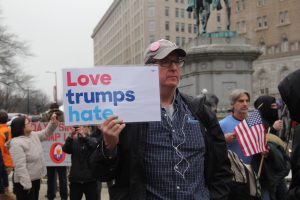 A protester holds a placard at the McPherson Square. (Shahzeb Ahmed/MNS)

“In an interesting way, Mr. Trump is unknowingly uniting people who would normally be much more divided along sectarian lines,” he said.

With the air rancid with the smell of marijuana and the remnants of tear gas, several masked protesters strode up and down the street, waving placards, stick, and branches from nearby trees. 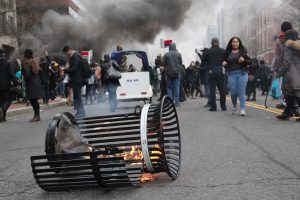 A trash can set alight on K Street during the protest. (Shahzeb Ahmed/MNS)

In Franklin Square, a band set up a stage and started playing songs. Some of the crowd shifted to dance to the music.

Rebecca Migdal, 56, was one of the artists who had come from New York city to perform at the protest. “We’re critical artists doing our bit to support the protest,” she said.

Migdal said she most fears that Trump and his allies will tear down the progress made during the Obama administration. “Best-case scenario: it will galvanize people to actually do something instead of waiting for the government to act,” she said.

The protesters, meanwhile, set a steel trash can on fire, a little further from the police line. They weren’t ready to leave. The police, it seemed, were happy to contain them in the area.