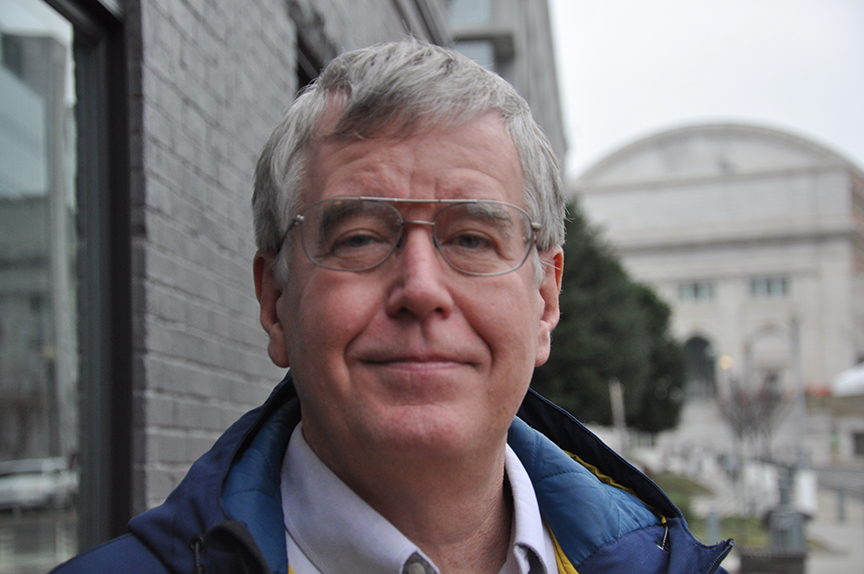 Robert Wegeng, 63, stands outside Ebenezers Coffee House, a few blocks away from the site of the 2016 President Inauguration of Donald J. Trump.

WASHINGTON — The drizzles of rain that started Friday as President Donald Trump began his Inauguration Day speech Friday reminded Robert Wegeng of why he was at the inauguration – to spread the word that technology can reduce greenhouse gas emissions now and the government can make it happen.

Wegeng, a 63-year-old engineer at the Pacific Northwest National Laboratory, part of the U.S. Department of Energy, said climate change is his foremost concern.

“President Trump needs to understand that climate change is real and is strongly influenced by greenhouse gas emissions,” he said. His lab focuses on energy, both its excessive usage and its global economic impact.

“My advice to President Trump is to keep an open mind and talk to some real experts on the matter.”

Wegeng also serves as the precinct committee officer for the Republican Party in Richland, and was in Washington to showcase that “today’s technology allows us to affordably reduce the greenhouse gas emissions — today, not 20 years ago as he seems to believe.”

He also wants to convince Republicans that the Department of Energy can do something practical about reducing greenhouse gas emissions.

He also disagrees with Trump and congressional Republicans who want to kill the Affordable Care Act. “Let’s work—Democrats and Republicans—to make the changes of the Affordable Care Act, consistent and all in one step,” Wegeng said. “An ideal starting point would be to revise the plan so the millions of Americans who benefit from the coverage would not have the rug pulled from beneath them.”

Another resident of Washington, Dennis Piatek, doesn’t want to change Trump’s opinion, but already, on the first day of his administration, wants the new president to move faster to build a wall along the Southern border of the U.S.

Piatekis a 65-year-old retired logistics manager at ConAgra Foods, said: “My first question for ‘the Donald’ is: When the wall will be built? Stop allowing people to stay here illegally and let’s take care of Americans first.”

A resident of Kennewick, Wash., Piatek and his twin sister, Denise Schetzle, attended the inauguration to stand against immigrants who bring “extremist, Islamic values and overindulge in America’s generosity.”

Piatek said he read the Quran and believes “moderate Muslims do not (and should not) follow that book.”

In Piatek’s view, America in the post-WWII era was when the country was at its best/

“The water was dirty but the sex was clean,” he says. “Today, movements like ‘Bathroom Without Borders’ threaten the principle of what America means, not enhance it.”

Both men urged their fellow Americans to consider that conservatives are not against change, but rather desire moderate change.

“We’ve moved into a status quo where there is great division and very little willingness to compromise,” Wegeng said. “We need to fix that.”

Piatek said all Americans saould remember one thing about today’s events: “’The ‘Donald’ is in office now, and that has to mean something.”