Idaho women march on Washington in support of women’s rights

Thousands travelled from across the country to attend the Women’s March in Washington. Maya, Mark and Terri Pickens and Theressa Schiers came from Boise to support women’s rights and protest Donald Trump’s inauguration. Provided by Terri Pickens.

WASHINGTON – Decked out in cheetah print leggings and kitten ears, Karen Day of Eagle, Idaho looked around with amazement at the crowd massed at the Women’s March on Washington.

She was proud to be among an estimated 500,000 people who were demanding women’s rights and protesting the inauguration of President Donald Trump.

Day, a journalist and freelance documentarian referred to her favorite among the many signs she had seen around her. ‘If he builds a wall,” it read, “our generation will tear it down.”

The march brought many Idaho women to Washington; their mood was uplifted by a spirit of solidarity and comradery. 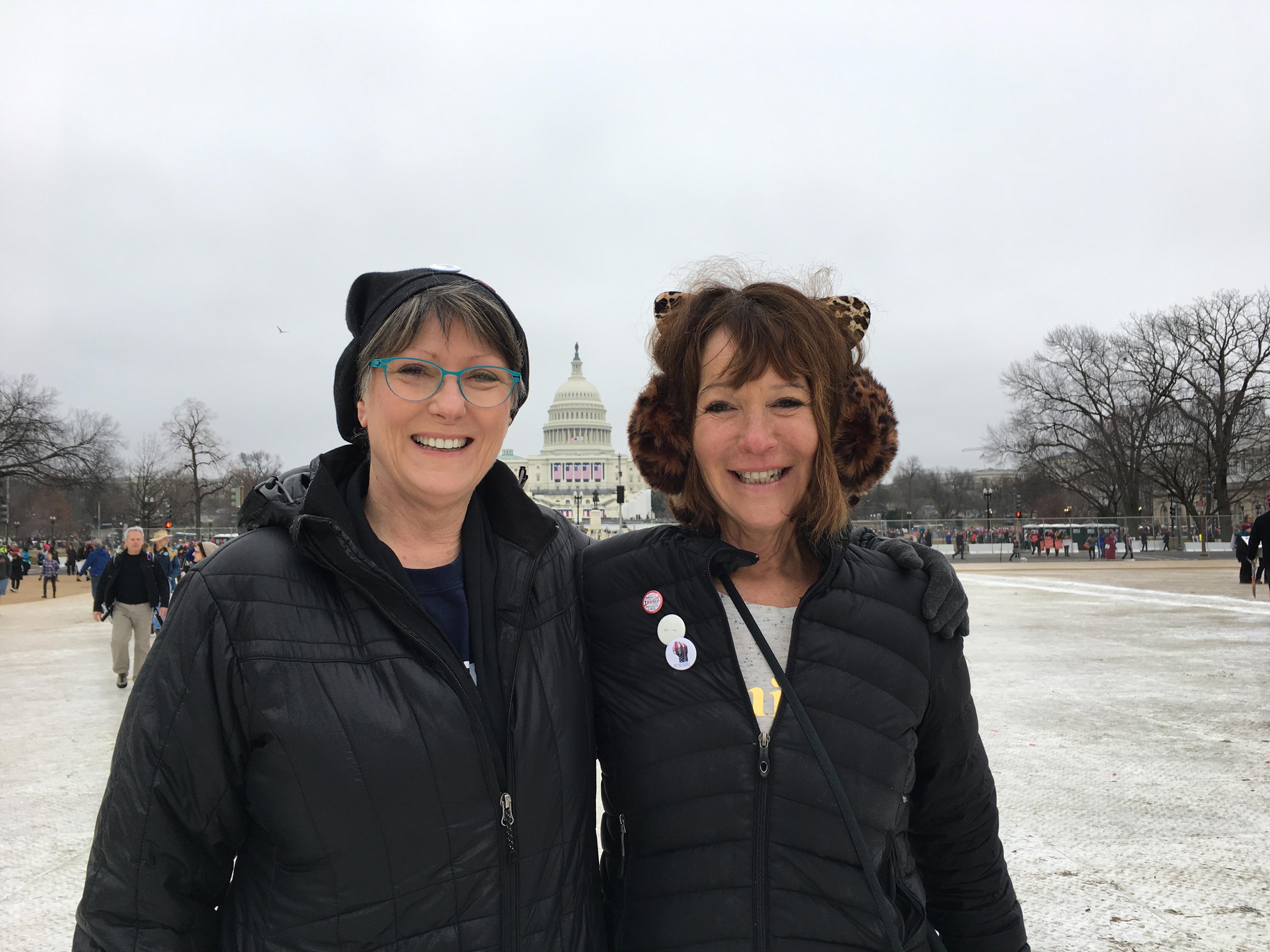 Karen Meyer and Karen Day of Boise arrived to the Women’s March on Washington before the crowds grew to more than 500,000. (Carolyn Cakir/MNS)

“I haven’t seen this sort of thing since the Vietnam War,” the former foreign correspondent said. “That took a number of people to die before it happened. This mobilized overnight.”

Her friend, Karen Meyer, a well-known philanthropist and tech entrepreneur from Boise, called the march “a groundswell.”

Meyer said she thought it was important for a broad and diverse representation of Americans to gather to have their voices heard.

“I don’t just see this as a women’s issue,” she said, “because men, women, families are all affected by these issues.” 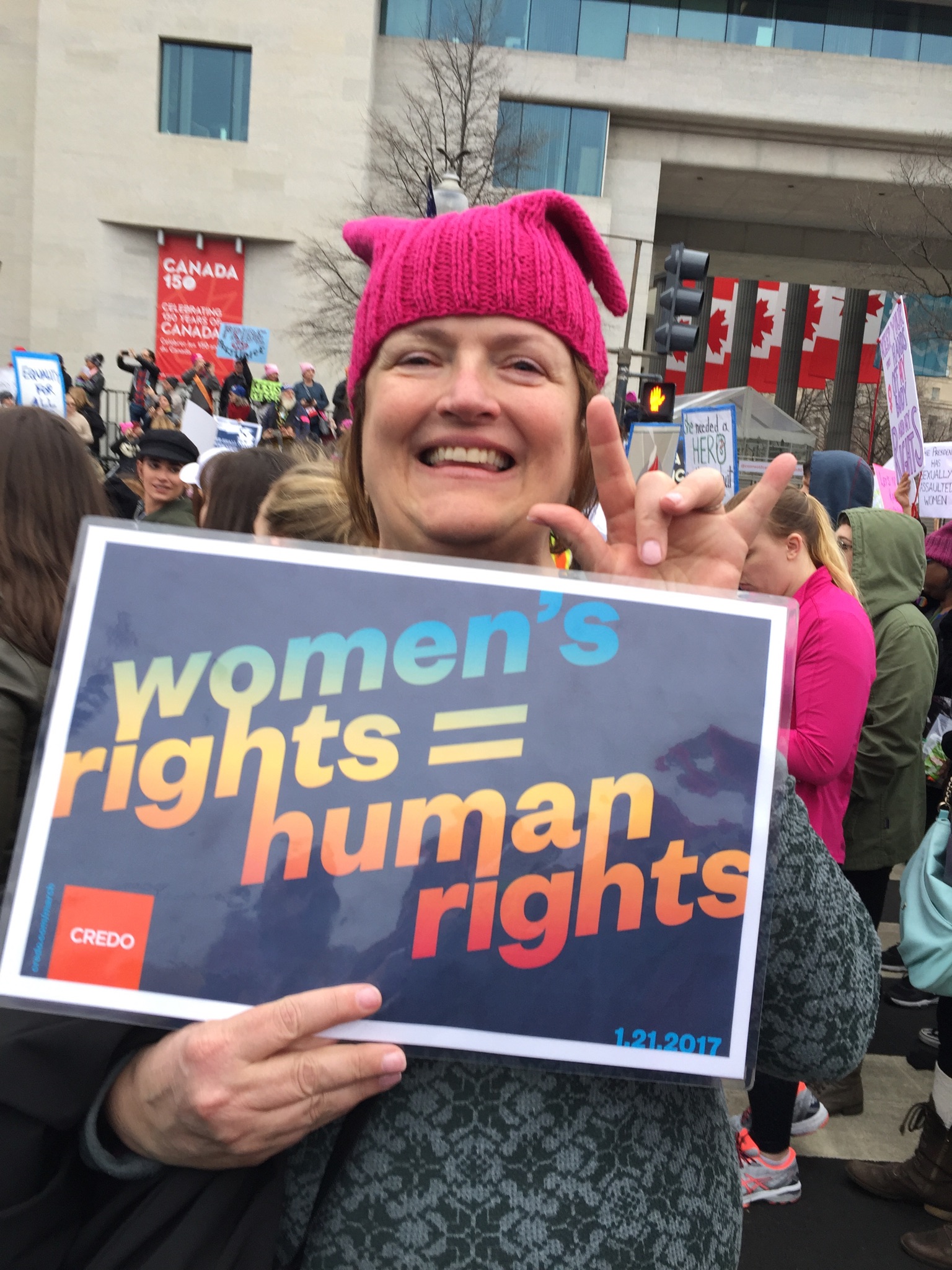 Deborah Arment, sign language interpreter, wearing a “pussy” hat—a knitted beanie that became the unofficial emblem of the Women’s March on Washington, on Pennsylvania Avenue outside the Canadian Embassy marching to the White House. Provided by Deborah Arment.

She marched to fight back against what she called the “-isms—homophobia, racism, ableism.”

Women and men of all ages, races and orientations marched.

“There’s a place in (the march) for diversity, a place in it for everyone,” she said. “Everyone gets a voice.”

Maya Pickens, 12, of Boise came to the march with her parents, Terri and Mark, and cousin Theressa Schiers.

Terri Pickens said she wanted her daughter to see that women are strong and that their voices should be heard. Maya was eager to attend.

“The first thing I asked was how early we were waking up,” she said. “I was so excited.” 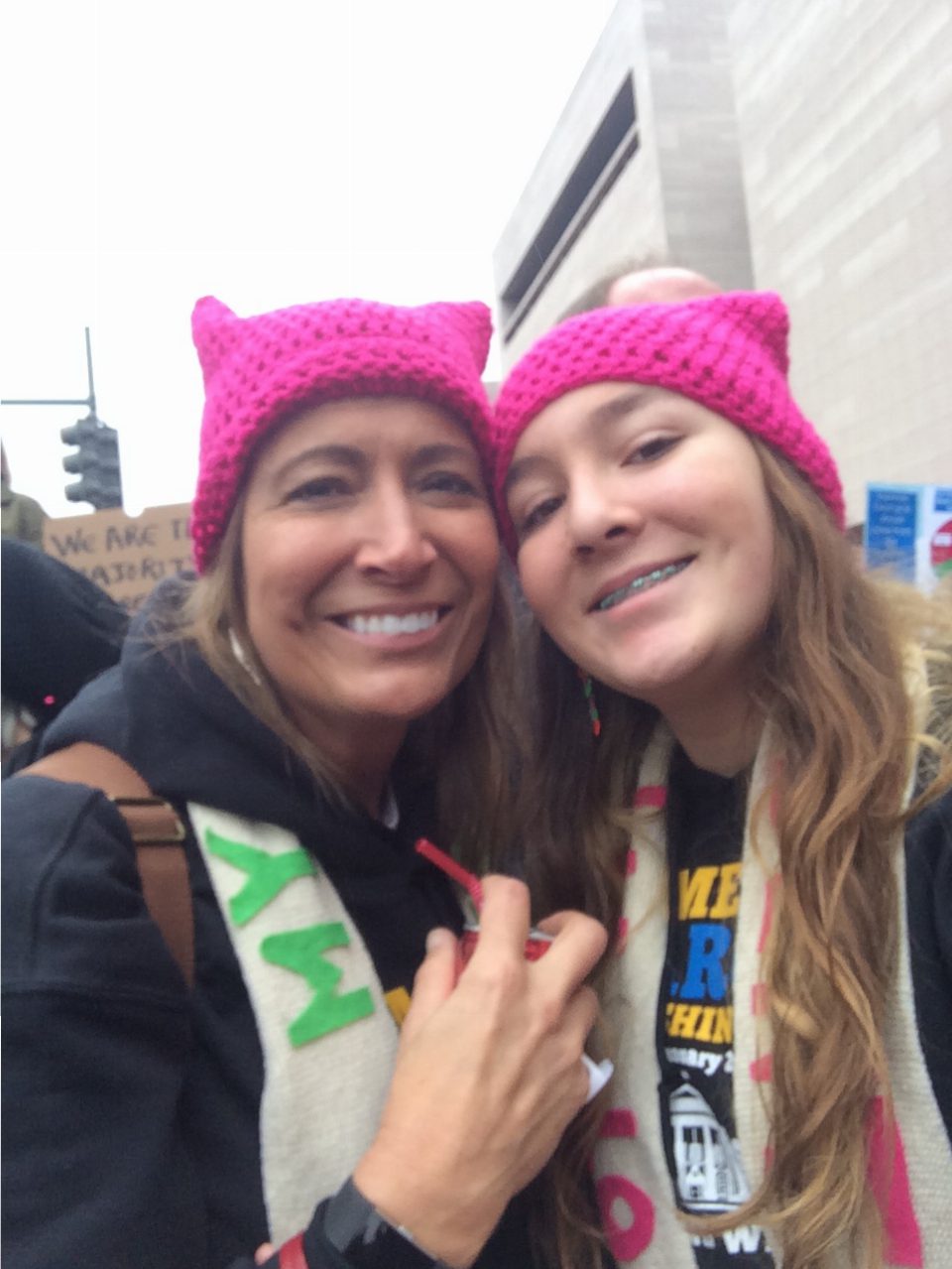 Terri and Maya Pickens stood at the “Sea of Pink,” a designated area for Planned Parenthood supporters. Provided by Terri Pickens.

Maya, a seventh grader at Sage International School, missed school on Thursday and Friday to travel to Washington for the rally.

“When I told my (female) science teacher, she said, ‘I’m so happy for you,” she said. “She actually started crying.”

Maya and her family sported pink “pussy” hats—knitted beanies with kitten ears, the unofficial emblem of the march—and home decorated scarves saying “not my president.” She carried a “Love trumps hate” sign.

“I wore all my gear proudly today to show that I believe women’s rights are important and that we have a purpose,” she said. “I wore my gear, and I was out there for my friends, my family, my siblings and America–the world, really.”

Maya and her family also attended the inauguration, and Terri and Maya said they got a different feeling from Saturday’s march.

For Maya, the Women’s March had many highlights—she loved seeing surprise guest Madonna—but her biggest takeaway was “the feeling that we made history. To know that we and millions upon millions of other women and men are supporting women’s rights today.”

As these women gathered in Washington, more than 5,000 people were participating in a sister march in Boise.

Day and Meyer communicated with friends who were protesting back home in Idaho throughout the day.

“What was, for us, really amazing was we were going back and forth with (them),” Day said. “We were literally and figuratively feeding off each other, experiencing this at the same time all over the planet.”