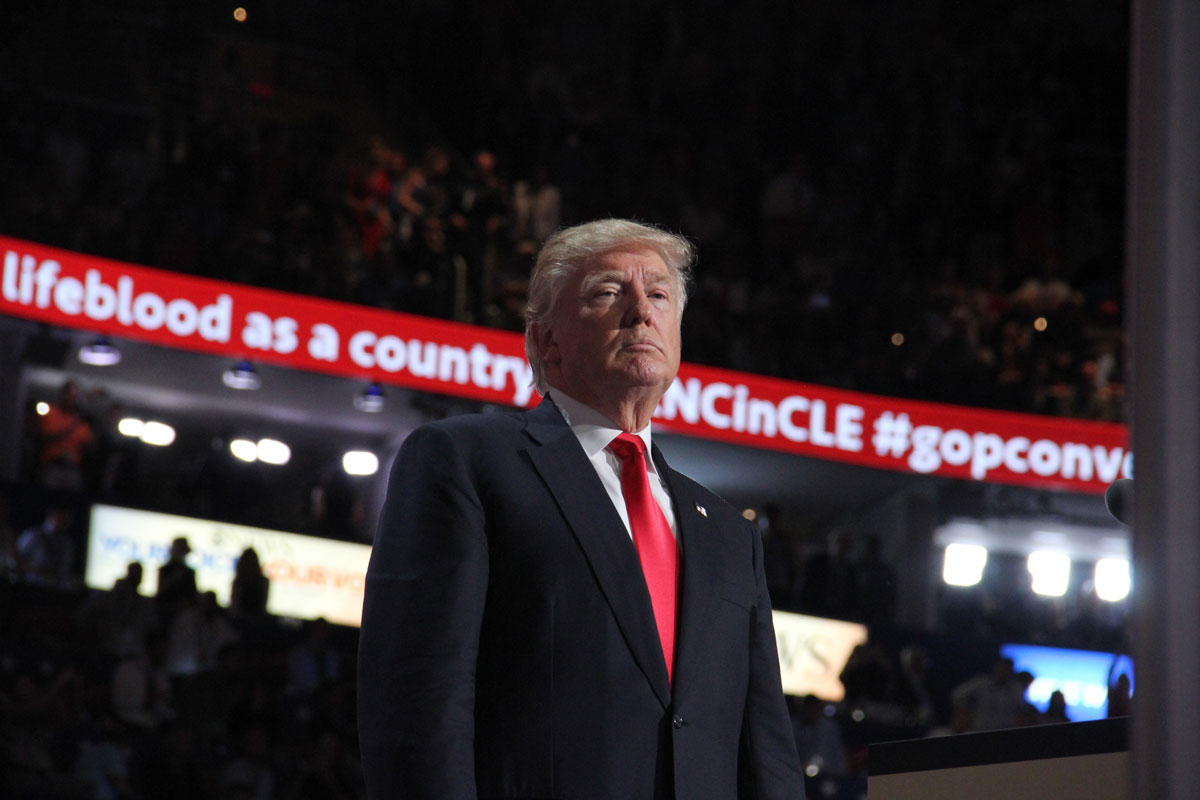 Donald Trump pauses in the middle of his RNC speech during a commotion on the convention floor. (Michelle R. Martinelli)

WASHINGTON – Democrats in Congress are demanding changes in President Trump’s authority to launch nuclear weapons, claiming that the president is unpredictable and “ignorant” about such weapons.

A bill proposed by Sen. Edward Markey of Massachusetts and Rep. Ted Lieu of California, both Democrats, would require Trump and any future president to obtain permission from Congress before a nuclear attack.

While the bill has no chance of passing the Republican-controlled House or Senate, it is a sign of the degree of acrimony between Republicans and Democrats under the new Trump Administration.

“Nuclear war poses the gravest risk to human survival,” Markey said in a statement accompanying announcement of the bill. “Unfortunately, by maintaining the option of using nuclear weapons first in a conflict, U.S. policy provides [the president] with that power.” He said the bill intended to remove the ability to launch a first strike. “Neither President Trump, nor any other president, should be allowed to use nuclear weapons except in response to a nuclear attack,” Markey said.

The “frightening reality” is that the country is in the hands of a president, Lieu said, who “has demonstrated ignorance” of nuclear weapons and has the “desire to be unpredictable.”

Trump’s potential use of nuclear weapons as president came up during the 2016 presidential campaign. Hillary Clinton used the issue to argue that Trump was unfit to be president.

“Imagine him in the Oval Office facing a real crisis,” Clinton said in her acceptance speech at the Democratic National Convention. “A man you can bait with a tweet is not a man we can trust with nuclear weapons.”

After his election Trump raised concerns among critics when he wrote a tweet in Dec. 2016 saying, “the United States must greatly strengthen and expand its nuclear capability until such time as a world comes to its senses regarding nukes.” The then-president-elect defended and expanded on his position in an interview with Mika Brzezinski on MSNBC’s Morning Joe.

“Let it be an arms race,” Trump said. “We will outmatch them at every pass and outlast them all.”

A number of Republican congressmen avoided issuing comments on the bill when contacted on Wednesday. One who did respond was Steve Womack, R-Arkansas. “Congressman Womack believes this is just an exercise in political grandstanding,” a spokesman said. When Trump became president on January 20, his authority to launch nuclear missiles was immediate and absolute. The so-called “nuclear football,” carried by a military officer, was now at his side. Presidents are expected to have nuclear launch codes with them at all times.

Joseph Cirincione, president of the Ploughshares Fund, a non-profit organization, has been a vocal critic of the presidential power to order nuclear strikes. His criticism is in line with the Democratic bill, even criticizing former President Obama for not moving to change the policy on first use of nuclear weapons.

“Obama didn’t do it,” Cirincione said, “Many of the very people he appointed to implement his reforms sided with the nuclear bureaucracy to stop him.”

Sharon Squassoni, director for the Proliferation Prevention Program at the Center for Strategic and international Studies, said “the 1973 War Powers Resolution sought to restrict the president’s ability to send our military forces into harm’s way,” she said, “unless one of three things happened:” Congress declared war, Congress passed a law allowing this or there was a national emergency resulting from an attack on the country.

“The Mareky-Lieu Bill specifically requires a congressional declaration of war for a first strike nuclear attack,” Squassoni said. “It does not preclude the United States from conducting a first use nuclear strike, but sets the bar higher than a presidential whim.”

William Perry, secretary of defense under President Clinton, has said he supports the Markey-Lieu legislation. During his tenure, Perry said he “never confronted a situation” where he recommended the president to “make a first strike with nuclear weapons.”

“I believe that the legislation proposed by Congressman Lieu and Senator Markey recognizes that terrible (first strike) reality,” Perry said in a news release. “Certainly a decision that is momentous for all of civilization should have the kind of checks and balances of executive powers called for by our constitution.”