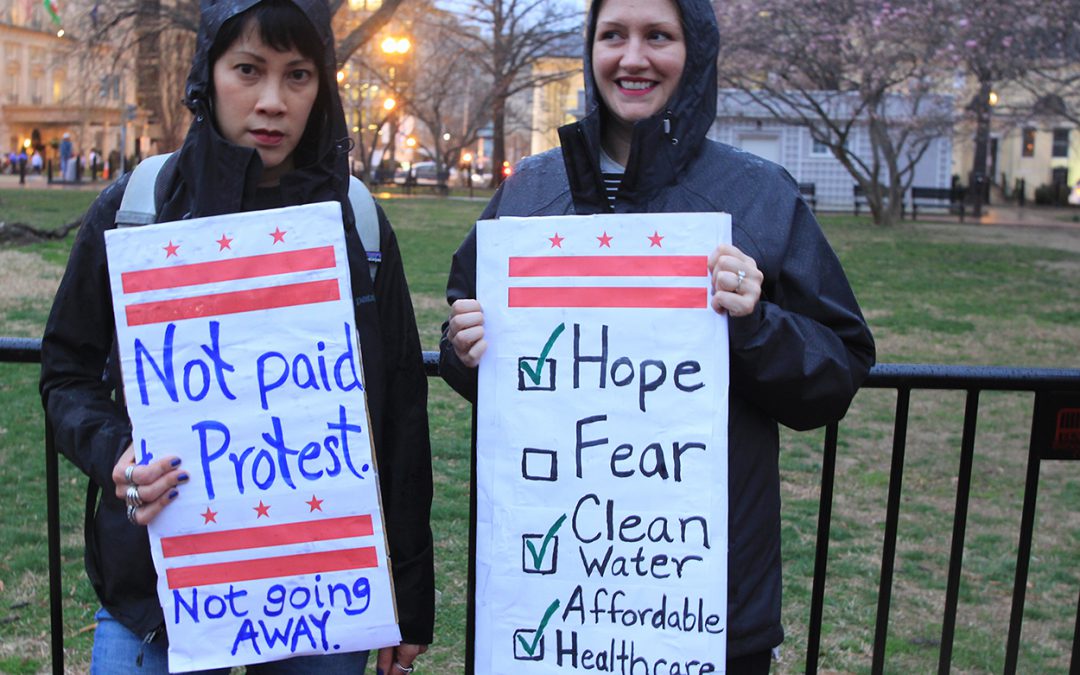 WASHINGTON – In the hours before President Donald Trump addressed Congress for the first time on Tuesday, a hundred or more protesters led by Trump Twitter target Rosie O’Donnell gathered outside the White House to demand that congressmen impeach the president.

Undeterred by a heavy rain, the protesters and activists representing at least a dozen groups assembled at Lafayette Square for the “Resistance Address.”

O’ Donnell, a Hollywood personality who has won the hearts of Trump opponents because of the ongoing fights between the two, wasted no time in poking fun at the president.

“Look at this crowd of 1.8 million people!” she said. “This is Donald Trump math, ladies and gentlemen.”

But jokes were not all O’ Donnell had come to deliver. She spoke of threats that the Trump administration poses to equality, justice and the constitutionally protected rights of life, liberty and the pursuit of happiness. “And whenever any form of government becomes destructive of these ends,” she said, “it is the right of the people to alter and abolish it.” The crowd screamed in agreement.

Faiz Shakir of the American Civil Liberties Union called Trump’s policies for millions of Americans “the greatest threat to our civil liberties in our lifetimes.”

The most vulnerable, he said, face deportation, detention without due process, and torture.

The ACLU has been at the forefront of the legal battle against Trump, filing several lawsuits against the executive order banning travelers from seven Muslim-majority countries that ultimately led to rulings that blocked its implementation. The organization has received $79 million in donations since the election.

C.T. Trankiem, whose parents are immigrants, worried about her own child’s future. “The current administration is discouraging the true American success story,” she said, “and so I stand here for my child and my family and my country.”

“He lies! He lies He lies!” the crowd chanted with her.