Another Immigration Order, Another Protest 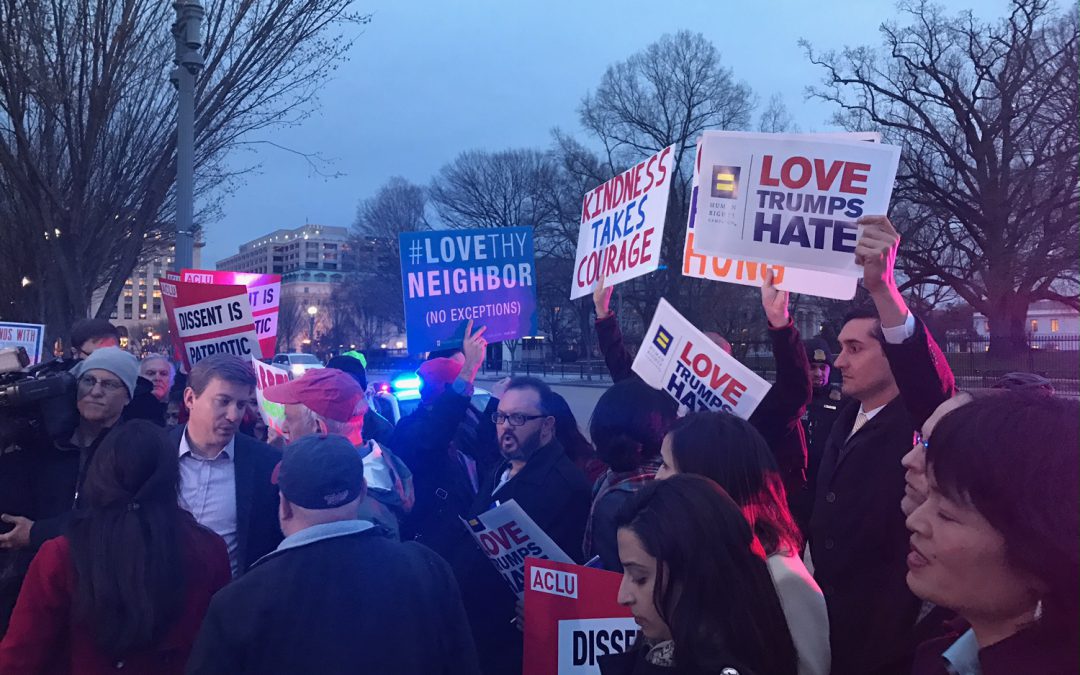 WASHINGTON – About 200 people rallied outside the White House Monday evening to protest President Donald Trump’s revised executive order that temporarily halts entry to the United States for citizens of six Muslim-majority nations calling it “Muslim ban 2.0” and an unconstitutional action.

The executive order came earlier that day, an effort to address concerns over the previous ban’s constitutionality. While Iraq was removed from the original list of targeted nations and the new executive order clarified the status for those already holding green cards, organizers said there was no substantive change to the law.

“Let’s make no bones about it, today’s ban is the ‘Muslim ban 2.0,’” said Joanne Lin, legislative counsel with the American Civil Liberties Union. “It’s a reincarnation of the original failed, defeated Muslim ban that was blocked by courts around the country.”

One of the protesters, Nicholas Bellomy, who called himself a loyal Republican when George W. Bush was president, said Trump’s campaign rhetoric and policies forced him to re-evaluate his positions.

“We’ve seen this before, we’ve seen action from this administration even back through the primary campaign that is not concerned with national security,” said Bellomy. “I work in the national security sector and it’s very clear the actions undertaken by this administration are not designed to increase the security of our people or of our nation but are designed to create a single race or single religion state. “

Mai Doherty traveled from McAllen, Texas with her husband and children to the protest because of her own childhood experience as a Vietnamese refugee. She was looking to do more to help.

“I have signed a few petitions, and I hope to sign up for a program to help refugees in the Texas area,” said Doherty. Her children Adam and Gemma came with their own homemade signs, repeatedly shouting “No ban, no wall.”

Despite anger over the revised ban, organizers asserted they will not let it go unchallenged. Tom Perez, the newly elected chair of the Democratic National Committee, assured the crown that his party would fight the executive order.

“We will stand together united today united tomorrow united for immigrants united for refugees, united for everyone who is vulnerable in this country,” said Perez. “History has its eyes on you.”