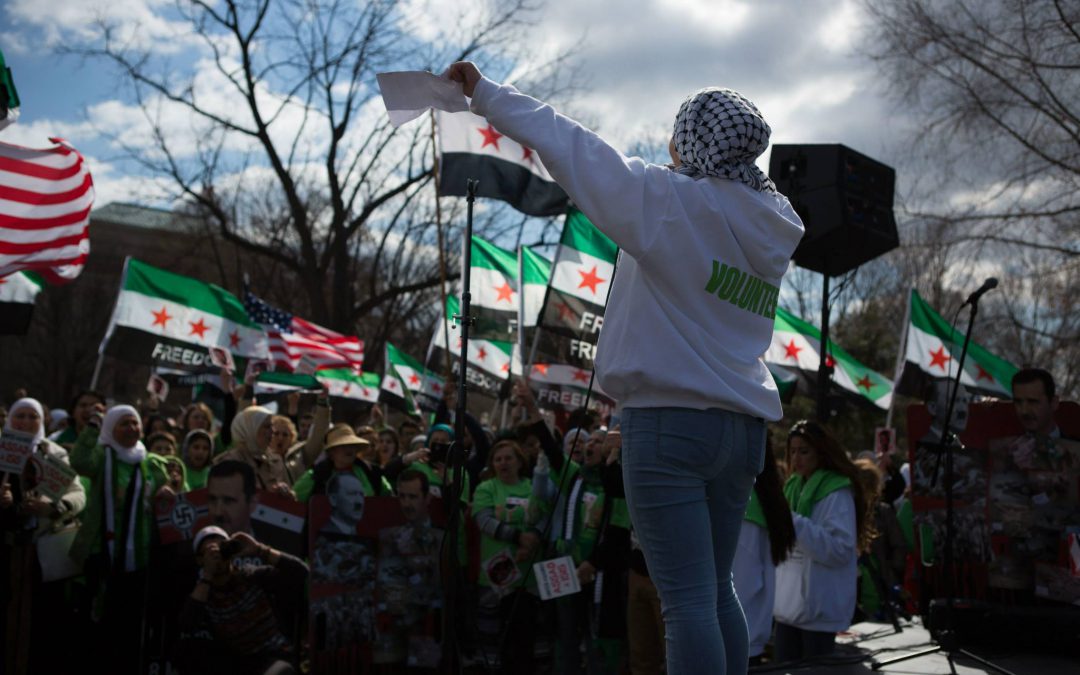 WASHINGTON – Hundreds of Syrians from across America will descend on Washington Thursday for two days of lobbying and planning for the future capped by a Saturday rally to commemorate the sixth anniversary of the start of Syrians’ protests against the regime of Bashar al-Assad.

The Syrians, who include U.S. citizens, refugees and asylum seekers, will participate in “The Revolution Unites Us,” a three-day event that includes meetings with members of Congress, panel discussions related to Syria’s conflict, a fundraising dinner, a rally and a celebration of Syrian food and culture, according to organizers.

“It’s a commemoration of the six years since the start of the revolution,” said Sam Shaguj of the Syrian Cultural House, one of the groups organizing the event. “Syria is being ruled by a ruthless dictator, and the fact that Syrians broke their fear and went down to the streets to demand their freedom and human rights—that’s something to celebrate.”

The event’s name was inspired by the name Syrian civilians gave to their protests in December after Turkey and Russia negotiated a temporary ceasefire, Shaguj said.

“People went down to the streets with one slogan: ‘The revolution unites us,’” he said. “That was a clear message to the international community: As soon as you stop the military campaigns, people will continue their civil resistance.”

On March 15, 2011, Syrians joined a wave of protests sweeping the Arab world and called on Assad, whose family has ruled Syria since 1970, for reform. Their early demands included the release of political prisoners and an end to the 1963 law creating a state of emergency in country. The Assad regime’s military met the protesters with live ammunition, and Syria has since spiraled into a regional war that has claimed hundreds of thousands of lives and displaced half the country’s population.

“Though it’s been a difficult time and a very sad time, the anniversary is really of an event that took 50 years for people to be able to arrive to,” said Suzanne Meriden, event organizer and director of operations at the Syrian American Council. “In the past, they were completely shut out and unable to express themselves because of the fear of being disappeared and of being tortured.”

The event will kick off with an advocacy day on Thursday. Dozens of Syrians from 12 states, including large contingents from California, Illinois and Arizona, will meet with members of Congress to push for “bringing freedom and democracy to Syria,” Meriden said.

Their requests include the creation of safe zones to protect Syrian civilians, U.S. sanctions against Russia and Iran for their financial and military support for Assad, and the reintroduction of a bill that would impose sanctions on supporters of the Assad regime. The House passed an identical measure with bipartisan support last year, but it did not come to a vote in the Senate.

The day of advocacy is a five-year tradition, as is a fundraising dinner that will be held at the Hyatt Regency Crystal City in suburban Virginia on Friday evening and a rally on Capitol Hill on Saturday morning.

But event organizers, which also include the Coalition for a Democratic Syria and the American Relief Coalition for Syria, have introduced new events to this year’s commemoration.

On Friday, they will host a full-day “Syrian-American General Assembly,” an event meant to allow Syrians to discuss challenges they face, Shaguj said.

Participants will discuss the representation of the Syrian conflict in the media, priorities for Syria advocacy during the Trump administration, and support for humanitarian relief efforts and for Syrian civil society.

Too often, news stories frame the Syrian war as a conflict between the Assad regime and terrorist groups, such as ISIS, Meriden said.

“This is actually something the Assad regime and his allies have backed and promoted through propaganda in the media, and unfortunately they stole the narrative of people looking for freedom and democracy,” she explained. “We need to talk to the media to figure out how to bring back the root of the problem to the narrative.”

On Saturday, a tribute to Syrian food and culture at the National City Christian Church will target the American public, Shaguj said.

“They hear about Syria in the news, but they don’t really know who we are,” he added. “We want to build bridges, and the best way to do that is through culture.”

Traditional Syrian foods—such as kibbeh and shawarma—will be prepared by recently resettled Syrian refugees. Musicians from the Middle East will play Syrian music, and a troupe from New Jersey will put on an “arada,” a combination of song and dance that is often performed at Syrian weddings.