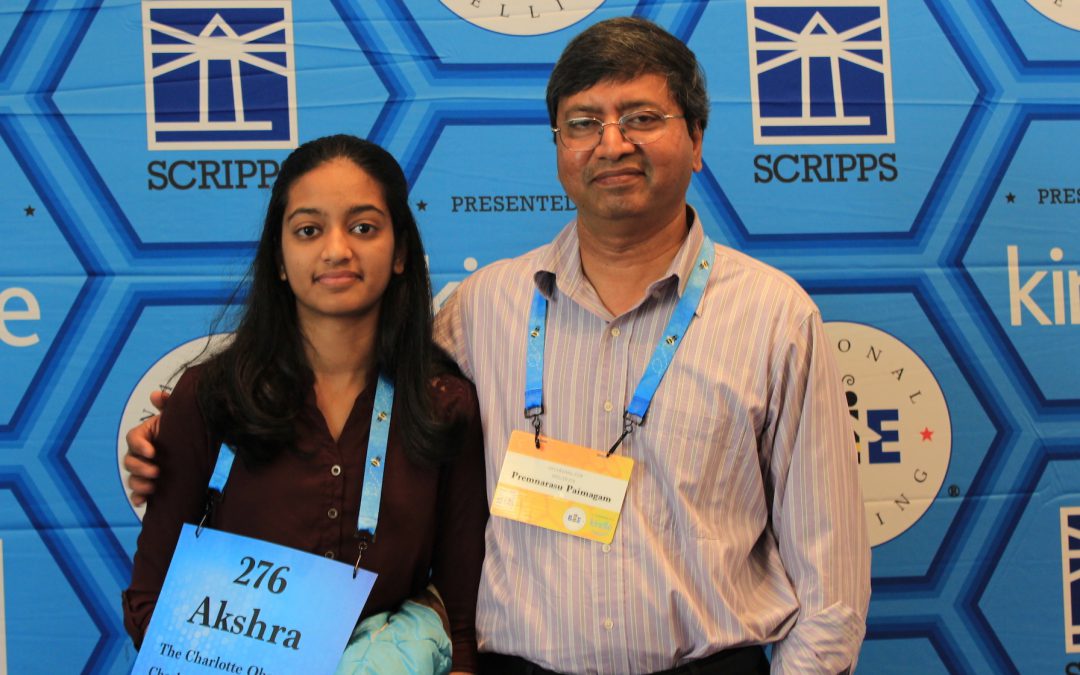 Akshra Paimagam poses with her father, Premnarasu, after being knocked out in Round 5 of the 90th Scripps National Spelling Bee on Thursday. She finished in 23rd place, up from her 39th rank from 2015. (Shahzeb Ahmed/Medill News Service)

NATIONAL HARBOR, Md. – The moment she heard the word Thursday, Charlotte eighth grader Akshra Paimagam knew she was in trouble.

This was Round Five of the 90th Scripps National Spelling Bee, being held at the Gaylord Resorts and Convention Center. Paimagam was one of 34 students left on stage at that point, out of an original 291 spellers who participated in Wednesday’s preliminary rounds.

“Panettone,” said Jacques Bailly, the pronouncer. “Panettone?” she repeated, hesitantly. Her father, Premnarasu Paimagam, looked on nervously from the audience.

Gathering her thoughts, the speller scribbled on the palm of her left hand with her index finger. Still seeming unsure, she gave it a go. “P-A-N-N-O-T-T-E-N-E?” she asked the judges.

The dreaded bell for a misspelling rang in answer. “I thought I knew the word, but questioned myself, and… I guess that was the wrong answer,” she reflected later.

Panettone is a traditional Italian sweet bread served at Christmas.

Paimagam, a 14-year-old student from Randolph Middle School, thanked the judges and left the stage, stopping to gather her jacket from her seat. It was the same one she had worn to the 2015 National Spelling Bee, when she finished 39th. She hasn’t washed it since.

This time, Akshra upped her own results from two years ago and clinched the 23rd position. “I wished I would do better, but I can’t do anything about it now,” she said, her voice shaking with emotion. “This was my last year [at the Spelling Bee] so I’m kind of sad.”

Students can participate in the national bee only through the eighth grade. Eleven million students started out in local competitions.

Standing beside her, her father smiled reassuringly. “I’m so proud of her,” he said. “I know how hard she studies and sets her goals really high.”

He said his daughter’s goal had been participate in final round Thursday night. “So I just feel bad for her at the moment,” he added. “But there are so many other things she is interested in,” he continued. “She’s just a wonderful child.”

For now, the spelling whiz wants to relax for the rest of the summer. But relaxing for her would mean “probably take up competitive swimming,” she said.

Her long-range goal is to become an oncologist. “I would like to help people,” she said earnestly. She loves biology and especially enjoys reading science magazines, hoping these will help achieve her goal.