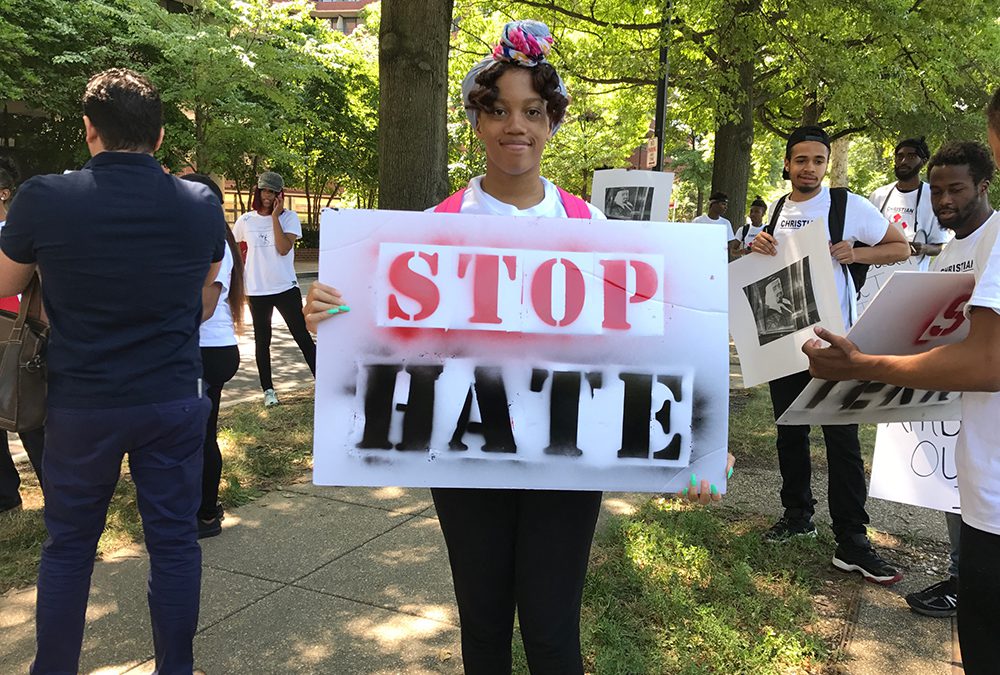 Protesters gathered outside of the Embassy of Qatar, in Washington, D.C. (MISHA EUCEPH)

WASHINGTON — Protesters picketing outside the Embassy of Qatar on Wednesday demanded that President Donald Trump take concrete actions to pressure Qatar, which has been boycotted by five Arab nations, to stop state-sponsored terrorism.

“Qatar is frozen out of the international community. Right now is the perfect time for Rex Tillerson and the State Department to say, ‘We want to help the Qatari government transition from slave-based labor to an economy that’s supported by the morals of the 21st century,’ Said Mike Donovan, president of Nexus Services, a firm that represents immigrants.

On June 5, Saudi Arabia, Egypt and three other Arab nations suspended both diplomatic relations and travel to and from Qatar. These countries cited Qatar’s alleged support for terrorist and extremist groups in the region.

Several United Nations-sanctioned members of the Taliban are believed to live in Qatar and it has “an official office in Qatar’s capital, Doha,” according to a new list issued by the Counter Extremism Project.

Trump has claimed credit for Qatar’s isolation by the Arab nations.

“During my recent trip to the Middle East I stated that there can no longer be funding of Radical Ideology,” he tweeted on June 6. “Leaders pointed to Qatar – look!”

But the protesters asked for more concrete action from the U.S.

“Right now, the Saudis and the rest of the Gulf Arab states are hurting Qatar pretty big with their economic and diplomatic blockade,” said Jim Hanson, president of the Security Studies Group, a conservative-leaning think tank.

“The thing that the president can do is he can pull the plug of the sale of aircraft to Qatar.”

Other protesters called for the U.S. to close its Al Udeid Air Base. outside of Doha, the largest U.S. military base in the Middle East.

They also called on Qatar to stop financing terrorism, reform the Al Jazeera TV network, which they called “a terror mouthpiece,” and turn in all terrorists now in the country.

“Qatar has significant economic investments in this country,” said the Rev. Anthony Evans, president of the National Black Church Initiative, which represents 34,000 churches in the U.S.. “You cannot invest in this country and reap the economic benefits and turn right around and persecute Christians. That’s a moral contradiction.”

The Embassy of Qatar did not respond to requests for comment.