How Did a Copy of the Declaration of Independence End Up in England? 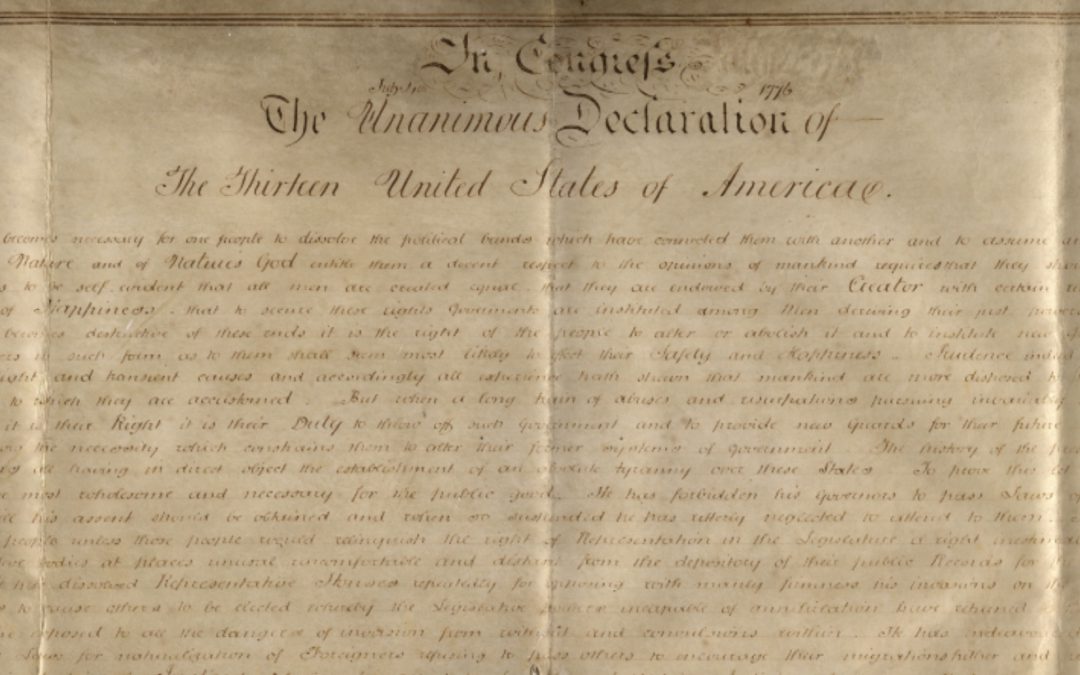 A rare copy of the Declaration of Independence has been found in England. (Image Courtesy West Sussex Record Office)

WASHINGTON – The mystery behind the origins of a recently discovered second handwritten parchment copy of the Declaration of Independence sounds like it came from the movie “National Treasure” – with Thomas Paine, the Third Duke of Richmond and declaration signer James Wilson in starring roles.

Two Harvard researchers announced in April that they had discovered a second handwritten version – in the south of England. On Thursday, they offered a new theory as to how the document ended up in England, speaking at the National Archives, which is home to what had always been assumed to be the only handwritten parchment copy of the Declaration of Independence.

The origins of the second copy — dubbed the Sussex Declaration because of the area of England where it was found — continue to intrigue researchers as they study who commissioned the document and why, as well as how and when it ended up at the West Sussex Record Office in the city of Chichester.

“There’s just so many puzzle pieces to put together,” researcher Emily Sneff said in an interview. “It’s been almost two years now since we first came across the document and it’s been continued research and digging into all these different possible connections to the document.”

Material evidence dates the copy back to the 1780s — the years leading up to the Constitutional Convention in 1787. Measuring 24 by 30 inches, the Sussex Declaration is the same size as the first copy, but oriented horizontally.

But one of the key differences between the two documents lies in the grouping of the signatures at the bottom. Although it was typical during that time period for signatures to be grouped together by state, the signatures on the Sussex Declaration are jumbled.

“On the Sussex Declaration the state groupings have been completely done away with,” Sneff said during the presentation. “After trying to find some sort of pattern or reason for the reordering of the names we reached the conclusion that the names are intentionally intermingled.”

Due in part to the jumbling of the names, Sneff and fellow researcher Danielle Allen believe the document was commissioned by Pennsylvanian James Wilson, who helped draft the Constitution and was also one of the signers of the Declaration of Independence. He was also a strong and vocal proponent of a unified nation, rather than a federation of states.

“Wilson is the person who was making a political argument that connects to this mode of presenting the declaration, without state by state groupings of the signatories,” said Allen.

It was therefore likely that Wilson commissioned this copy of the declaration “as part of his efforts to prepare materials for the Constitutional Convention,” she said.

Sneff and Allen’s current theory as to how the copy ended up in England is that the Sussex Declaration was originally held by Charles, the Third Duke of Richmond, who was known as the “Radical Duke” because he once supported the colonies’ independence.

As for what connects Richmond to Wilson? The researchers believe the answer lies with Thomas Paine, based on a series of connections they’ve uncovered between the two. For instance Thomas Paine was a tax collector in Lewes, a town in Sussex, which was under the Duke of Richmond. He also knew the owners of a Lewes hotel who had a business dealing with the duke. The theory goes that the duke introduced Paine to Benjamin Franklin. Then when Paine subsequently moved to America, he worked with Franklin and Wilson on the Constitutional Convention. Wilson to Paine to Richmond, the researchers say.

“This is a set of links that haven’t been documented previously,” Allen said. “And it gives us a window into how ideas about politics and the American Revolution may have migrated across the ocean, and among the U.S., Britain and France.”

Allen and Sneff plan to continue to investigate the link between Paine and Richmond. “That’s the sort of number one thing to pursue,” Allen said.

The two visit the duke’s library this summer in hopes of finding further evidence connecting him with Paine.

Allen said she “desperately hopes” to find a signed copy of one of Paine’s books in the duke’s library.