Building a new future for STEM in Pakistan, one robot at a time

The six high-schoolers who comprise the Alphabots. (Courtesy FIRST Global)

Washington — Origami, the traditional Japanese art of paper folding, seems like an unconventional way to find a love for engineering. But for Islamabad high schooler Ahmed Waheed, 15, the technical precision of folding intricate paper models sparked an interest in design and creation of a more mechanical sort: robotics.

“I was always excited to make stuff,” Waheed says, animatedly describing his favorite creations including a T-Rex, retractable paper weapons and other so-called “boy-stuff.”

“Then, after origami, I switched to motors,” Waheed continues. “And then I slowly came towards robotics.”

Waheed began making origami in grade 3 and though he still enjoys it, he’s now busier as Team Pakistan’s lead machinist at the FIRST Global robotics competition.

The nonprofit FIRST (For Inspiration and Recognition of Science and Technology) was founded in 1989 by inventor-entrepreneur Dean Kamen. Held from July 16-18 in Washington, DC, the inaugural FIRST Global event brought together 830 high schoolers from 157 countries to tackle the challenge of water purification in an ‘Olympics’-style competition. However, these robots stayed clear of the water, sorting plastic balls instead — blue balls represented clean water, while orange balls were contaminants. 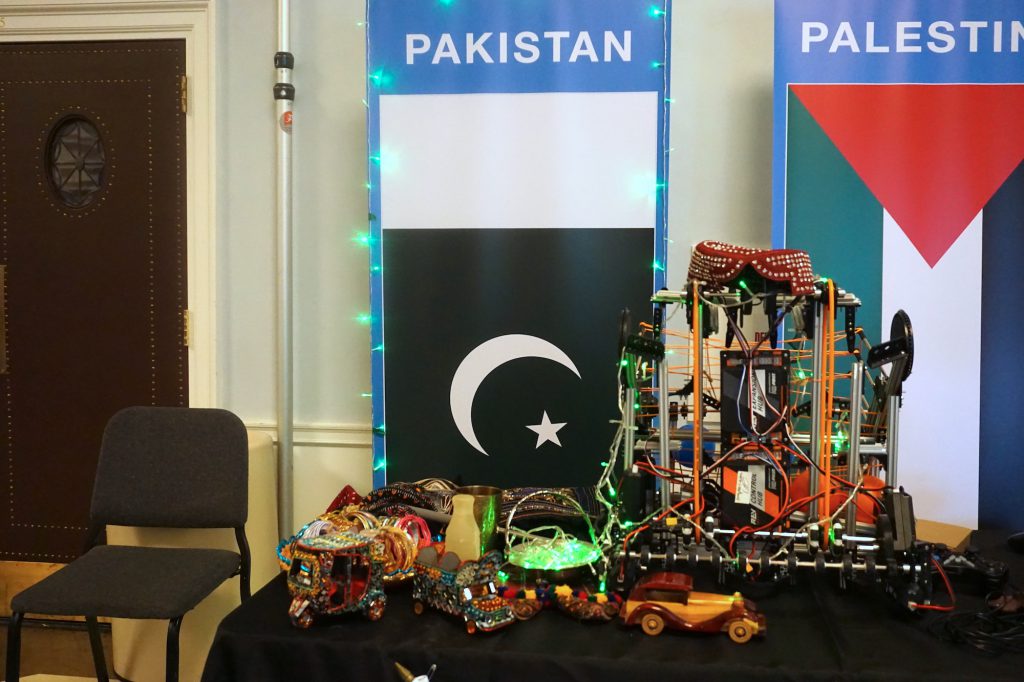 The night before the games begin, Team Pakistan’s table is full of souvenirs from home. (Ritu Prasad/MEDILL)

Building the “water-purifying” robot in the time leading up to the competition was a challenge in itself. “We got our kit very late, like around two months ago, so we had to be very quick in assembling the robot,” says Hamza Arshad Bhatti, the team captain. “We didn’t even take Sundays off. We worked 24/7, sometimes we’d be working around 15 hours continuously.”

While the team had used Lego Mindstorms—kits that help users build programmable robots—before, they had yet to tackle a robot of this magnitude. So, they started by building a car to understand the basic programming language. Then when it came to designing the robot for the competition, they took their inspiration from an unlikely source: the woven rope and string structure of the traditional Charpoy bed.

“We used that to make the storage part,” Bhatti says, proudly pointing to the orange strings interlaced across the body of the robot. A tiny Pakistani flag sits above.

Growing up, Bhatti became fascinated by science because of his dad’s passion for the field. Watching lectures by scientists and engineers, such as his personal favorite theoretical physicist Michio Kaku, also heightened his interest. “I got inspired by them when I was very little,” he says. Now, Bhatti dreams of being the CEO of a big robotics institute.

While Bhatti and students like him may dream of creating new science, technology, engineering, and mathematics (STEM) based companies, Pakistan isn’t the friendliest to innovation. According to the Global Innovation Index, Pakistan ranks 131 out of 141 countries.

Pakistan, India, and Bangladesh, as South Asia’s most populated countries, face serious issues of “insufficient educational enrolment rates and poor quality primary schools,” according to the World Economic Forum’s 2016 Human Capital report. In Pakistan, the youth literacy rate is just 75 percent, “far behind other emerging markets as well as their own lower-middle income group’s average.”

According to UNESCO data, Pakistan’s expenditure on research and development has also dropped substantially over the last 10 years. In 2015 Pakistan only spent one-quarter of one percent of its GDP on research and development in the science, technology and innovation sector. This is mirrored by a decrease in funding from the government — in 2011 the Pakistani government funded close to 84% of R&D, dropping to around 67% in 2015.

And when it comes to math and science education across Pakistan students are lagging behind, according to a report by the Pakistan Alliance for Maths and Science. The study found that average scores for math and science on the National Education Assessment System all fell below 50 percent. The report attributes this low performance in math and science to factors such as historically bad teachers as well as “low-quality content” for teaching those subject areas. “In addition to the quality of content, how material is taught is also a significant challenge. Pedagogical improvement is another area that needs attention,” states the report.

Keeping children interested in STEM subjects can be a difficult task. Traditional attitudes around math and science that push memorizing to achieve higher marks rather than fostering inquiry and comprehension have made these fields, understandably, unappealing to many youth. 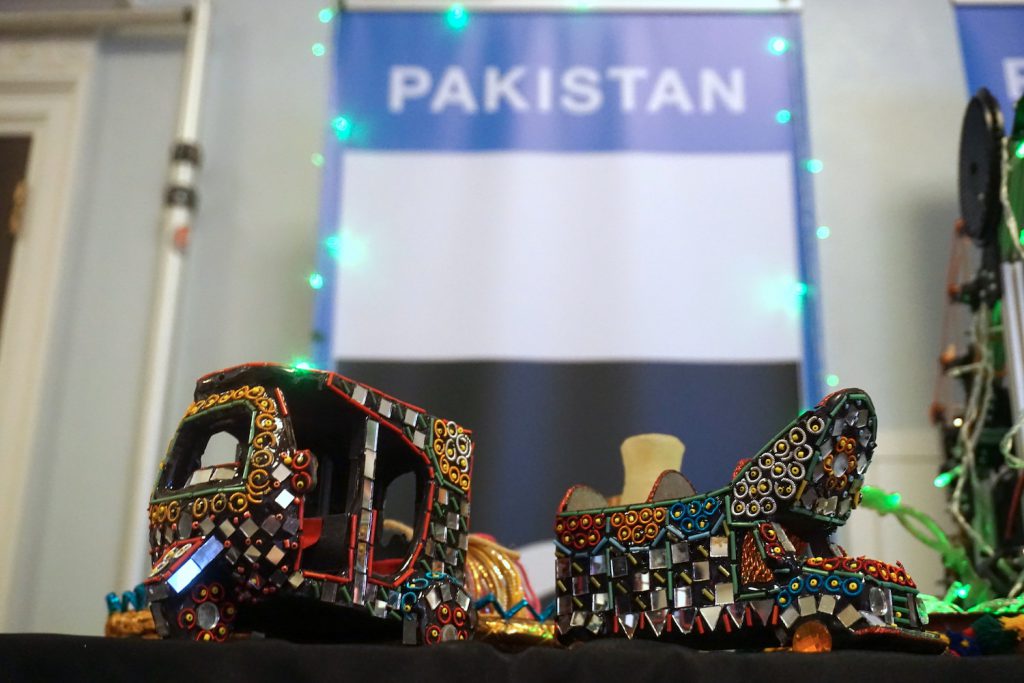 A pair of decorated rickshaws sits next to the much higher-tech robot on the team’s table. (Ritu Prasad/MEDILL)

A vision for Pakistan’s STEM future

But for Bhatti, robotics makes science more engaging. “In STEM and in robotics, you learn while having fun,” he says. “In class, sometimes you doze off because it’s not interesting but in this, it’s fun as well as educational.”

For now, Bhatti and his five teammates are the only robotics group in his school to participate in international competitions. Bhatti is confident that what he has learned from cooperation and competition on a global stage will help him achieve his career aspirations. The government, he adds, should pay more attention to the country’s youth.

“We, the children, are the ones who are going to grow up and become the leaders in the future,” Bhatti says. “So why not invest in the future of the country?”

While five of the team members were purely dedicated to manning the robot, Maryam Ahmad Kiyani,17, played an important role as their spokesperson, interacting with the other teams, writing articles and posting on social media. Kiyani brought a basket of bangles as a token of friendship to pass out to other countries — a gesture so popular the team ran out within hours.

“It’s a lot more than just robot building, it’s teamwork, it’s cooperation, it’s interacting with the world, it’s great,” she says. While she plans to study political science when she heads to Lahore University of Management Sciences in the fall, Kiyani says that technology will “make the world a better place.”

She also hopes that through competitions like FIRST Global the team will be able to bring more attention to robotics and STEM education. “We really hope to continue participating in this, and we hope that we’ll be given recognition locally in Pakistan on the government level,” she says. “It is really important for us to keep going into competitions and keep continuing this robotics journey along with our studies.”

Accompanying Team Pakistan was their technical supervisor Umer Farooq. A STEM educator, Farooq travels around Pakistan teaching students about robotics. He’s been with the team now for nine months, and says that though they began with minimal knowledge about robotics, he’s proud of how far they’ve come.

“It’s really important for the kids to be here at [a] younger age, so that they can experience how to collaborate, [and] how other people think,” Farooq says. “By just watching other students they can learn a lot…Our students need this kind of exposure.”

Farooq says he’s disappointed with the lack of government aid when it comes to STEM education, adding that in Pakistan, many students and their parents aren’t aware of what STEM fields are, or what opportunities exist. Farooq himself discovered robotics only because older friends in university piqued his interest in the field.

Now, as a teacher himself, he wants schools nationwide to incorporate STEM subjects in their curriculum. 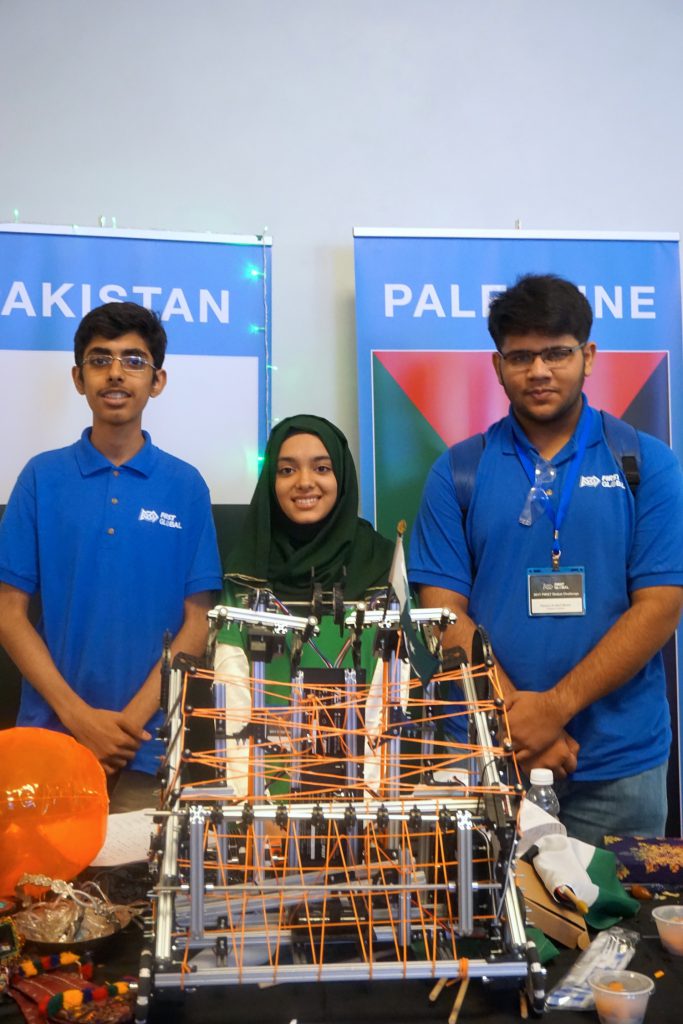 A starting point for new students

For now, the students on Team Pakistan have successfully ignited an interest in robotics in their school — and in themselves.

“If I compare this competition with the first competition I participated in, there’s a lot of difference,” Waheed says. “We started from Lego Mindstorm and now we’re working with robotics and I feel like this is the biggest achievement up till now.”

After his team won the national competition, Waheed says, he noticed more of his peers expressing an interest in STEM.

“Now many of them are excited to participate,” he says, grinning. “Our school has started many robotics clubs!”

Before they enter the robot arena again, the students of Team Pakistan take a moment to relax, sharing pizza and snapping selfies with their newfound friends from across the globe. They’ve already added each other on Snapchat, and now they’re looking forward to competing—and cooperating—again at the next challenge. 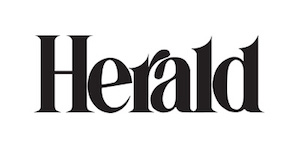