Medill students and grads mingle and network at Mentors reception 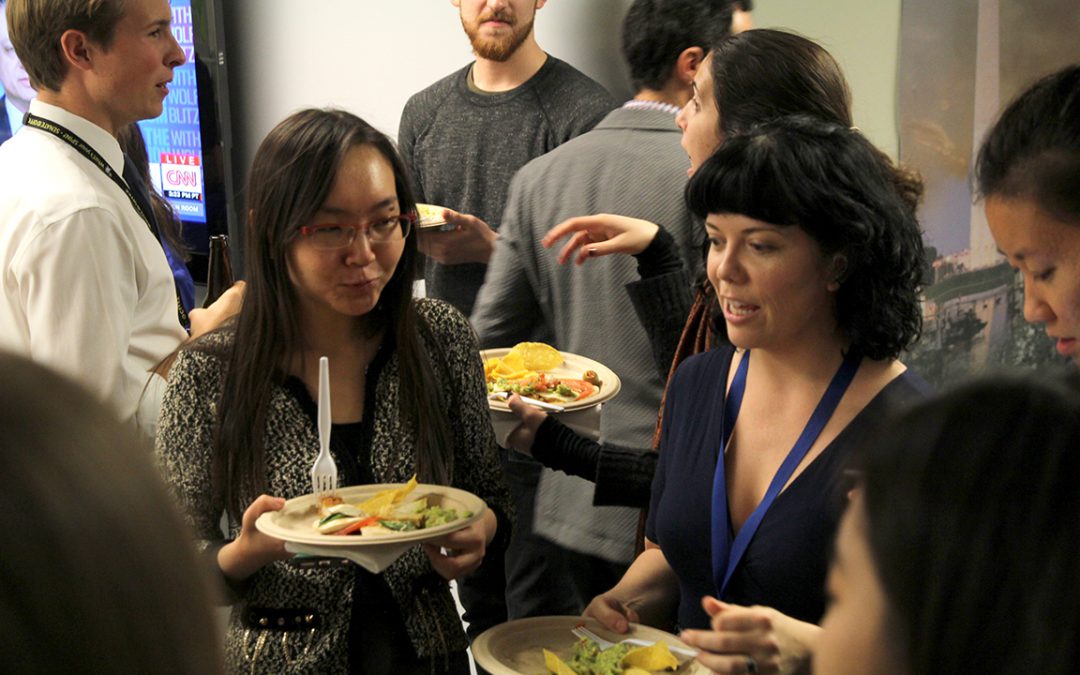 Jia You (MSJ16) and Gillian Brockell (MSJ12) chat with several students about how multimedia is integral to journalism today. You is an interactive graphics editor at Science, and Brockell is a video editor at the Washington Post. (MNS)

WASHINGTON– The Medill Mentors Program brought students and alumni together at the Washington, D.C. bureau on Jan. 23, introducing Medill’s next generation of reporters to locals in the media and giving students an opportunity to discuss their journalism careers.

The program began as a way for students to seek career and employment advice from Medill graduates familiar with the Washington media scene. The mentors are volunteers with ties to Northwestern, either as former students or former professors, who give informal interviews for students and help them network.

“I remember how challenging it could be just to get someone to take a second look at your—or even a first look—at your resume or to meet students for coffee or to make sure your application has the attention it deserves, and the Medill mentors are a great way to make sure that happens,” said Timothy Homan (MSJ07), executive director at Morning Consult.

Mentors at the event included Medill alumni employed at Politico, the Atlantic, the Washington Post, Science Magazine and Circa. They represented a variety of interests and news mediums including web, digital media and video.

“The university talks about the ‘Medill mafia’ so often,” said Eric Miller, a senior on the broadcast track. “It was nice to have an opportunity to see what the Medill brand can get you in the world.”

Gillian Brockell (MSJ12), video editor at the Washington Post, invited students to meet her for coffee and to review their resumes. Homan said such meetings can go a long way to help students advance their careers.

“We’ve seen first-hand what the competition looks like for Medill students who are job hunting, so we can let them know what would help differentiate them from the pack,” Homan said.