‘Grannies’ on a mission to the US-Mexico border 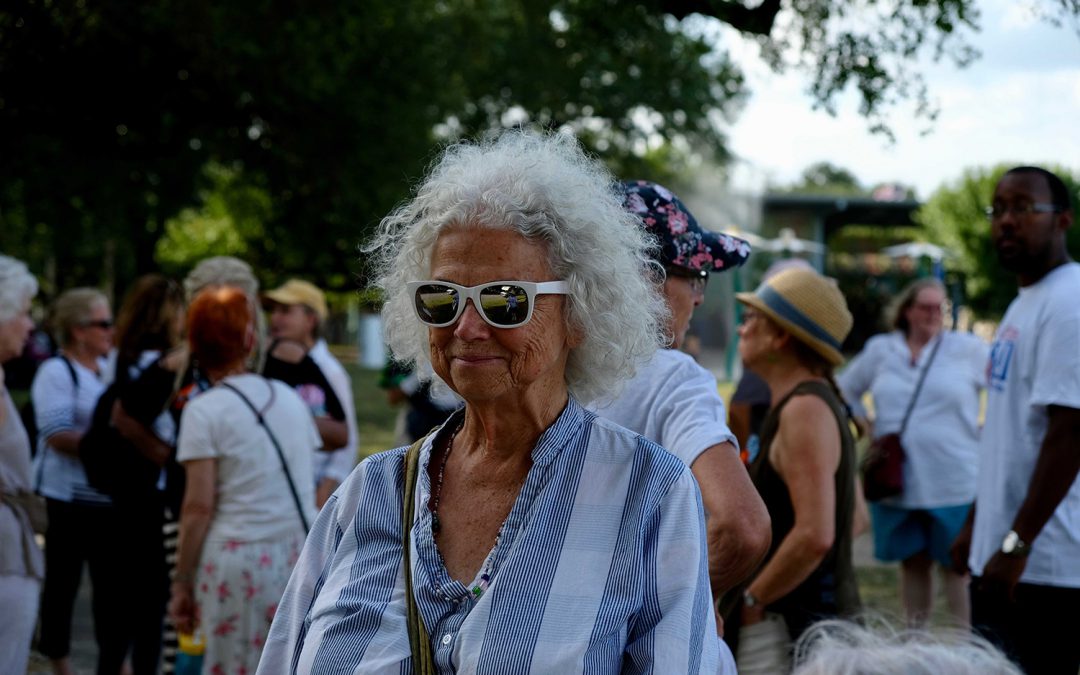 Mary Ann Bohlk travelled from New Orleans to join the 'Grannies' on their trip to the US-Mexico Border. (Holly Honderich/MNS)

MCALLEN, Texas – The final step of their journey was small.

Crossing the bridge from Brownsville, Texas, into Matamoros, Mexico, requires a short walk, a $1 toll – in quarters – and a perfunctory customs stop.

But for the members of “Grannies Respond” or “Abuelas Responden”, these last few meters marked the culmination of a week-long, 2,000-mile journey, provoked by outrage at new US border policies.

The group, calling themselves the “grannies,” travelled from New York City to border town McAllen, Texas, to challenge the administration’s policies with a message “of basic human decency.”

Now, moving in a loose two-by-two formation, the grannies greeted families sitting under tents at the border, providing food and words of support to those waiting to cross into the US.

For Kathleen Mellen, mother-of-three and grandmother-of-two, her time on board had brought her far from her home in Northampton, Massachusetts.

“You can’t really prepare for something like this,” she says. “To see people basically sitting on gravel with tarps over them… it breaks your heart.”

Like most others on board, Ms Mellen’s motivation for joining – a belief in the “designed, intentional cruelty” of the administration’s immigration policies – was deepened by maternal experience.

“Being a mother and a grandmother I know the incredible connection I feel toward my children and my grandbabies, and you put their faces on these children,” Ms. Mellen said.

“I can’t imagine the pain.” 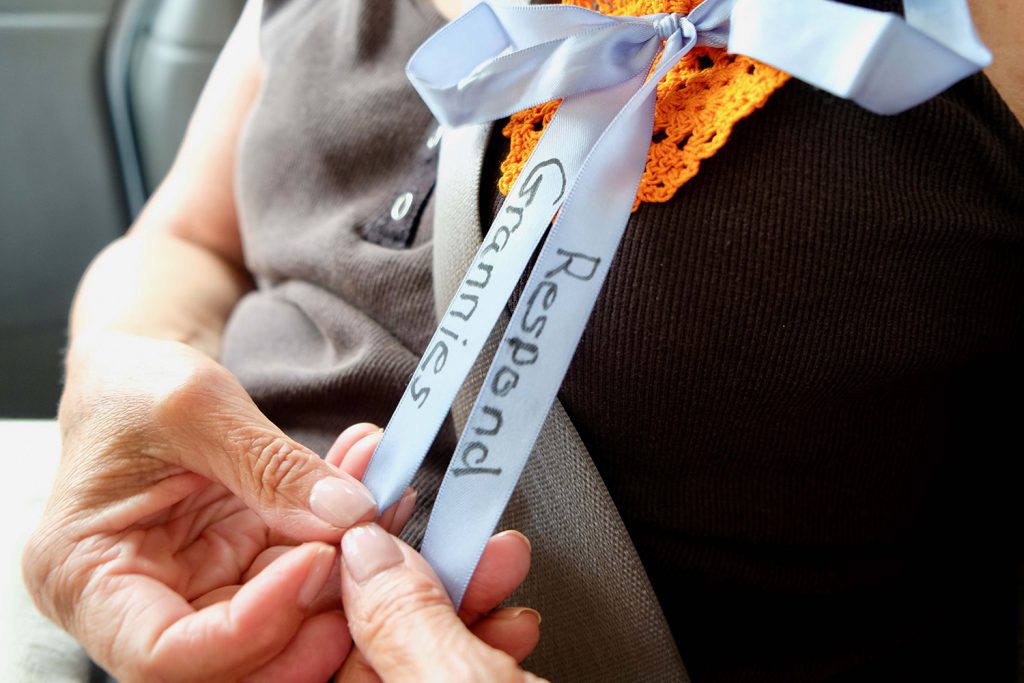 Of more than 2,500 children taken from their parents by US officials, over 500 remain in federal custody, yet to be reunited. Reports of abuse and negligence within detention facilities – denied by the US authorities – continue to surface, inciting widespread condemnation.

“You can’t use children as political pawns. It’s illegal and it’s just cruel,” says Lynne Iser, a grandmother of one from Philadelphia.

Americans have a “moral imperative” to respond, she added.

The group listed four principal demands driving their mission, including the reunification of families, the timely release of all immigrants and refugees, the fair and decent treatment of all, and the invocation of the grannie-approved “golden rule”: do unto others as you would have them do unto you. 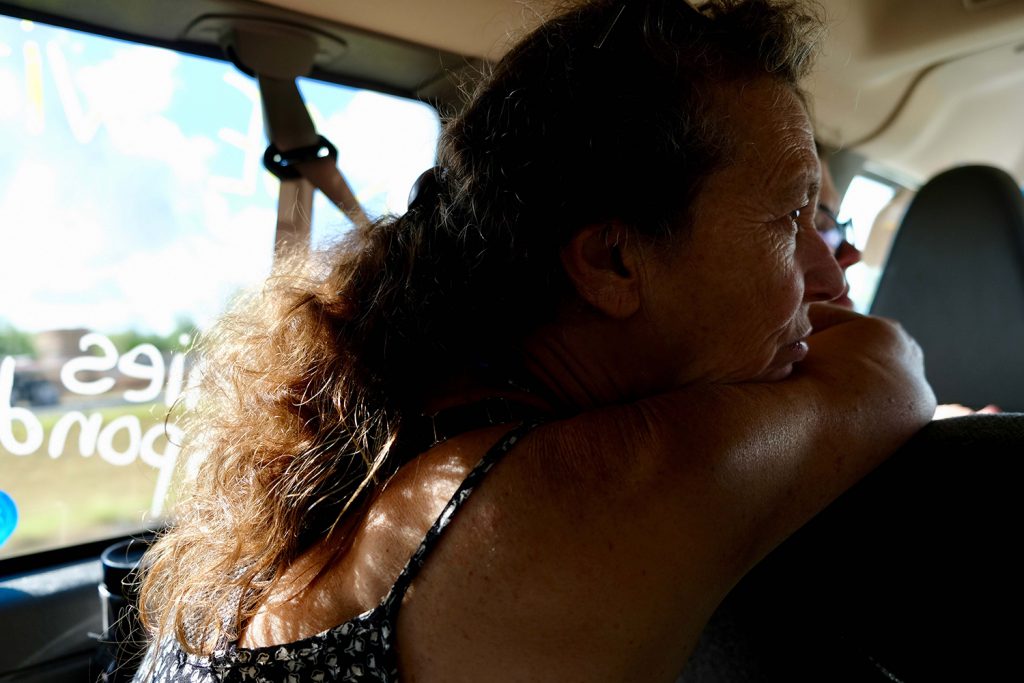 Lynne Iser sits aboard the caravans, where the grannies exchanged stories, laughs and songs. (Holly Honderich/MNS)

The caravan made six stops throughout the journey, passing through Pennsylvania, Kentucky, Alabama, Louisiana and Texas, cumulating in a “day of action” in McAllen.

At each stopover, they held rallies and vigils that grew in size and intensity as they advanced south.

“I feel a pull toward the border,” says Ms Mellen.

With few exceptions, the grannies were total strangers before they piled into one of two 15-seater vans in New York, picking up new members and vehicles – including one motorcycle – along the way.

By the time they reached McAllen, the group had swelled to about 200, according to organisers.

Diverse in religion, interests and geography, they were united in their disgust at the treatment of children and families at the border. 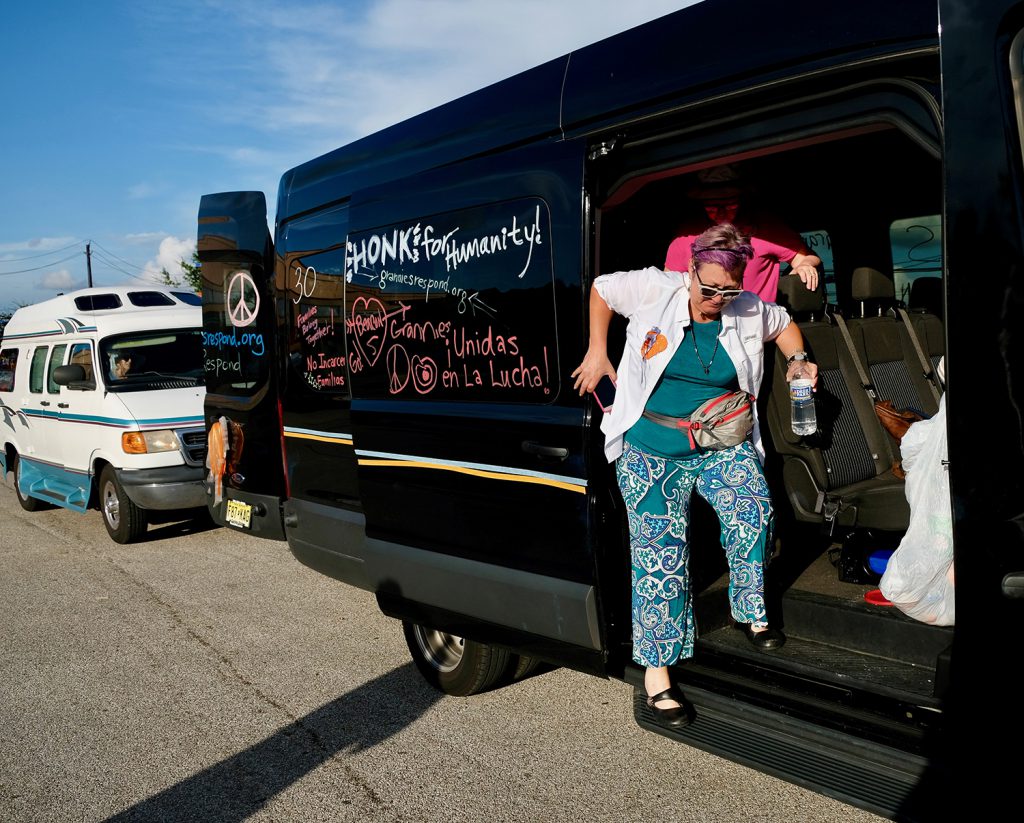 The grannies dismount for a rally in Houston, Texas. (Holly Honderich/MNS)

“There have been so many egregious moments in my 65 years, but this may take the top spot,” says Ms Mellen.

“When you start ripping babies from their mothers… it’s completely inhumane, barbaric and brutal.”

The grannies said, repeatedly, that their staunch convictions made the decision to join an easy one.

“We’ve got to take our country back,” says Barry Nelson, from Beacon, New York. Barry and his wife, Claire Nelson, were among the very first grandparents to sign on.

“We’re retired. What better way to use your time?” 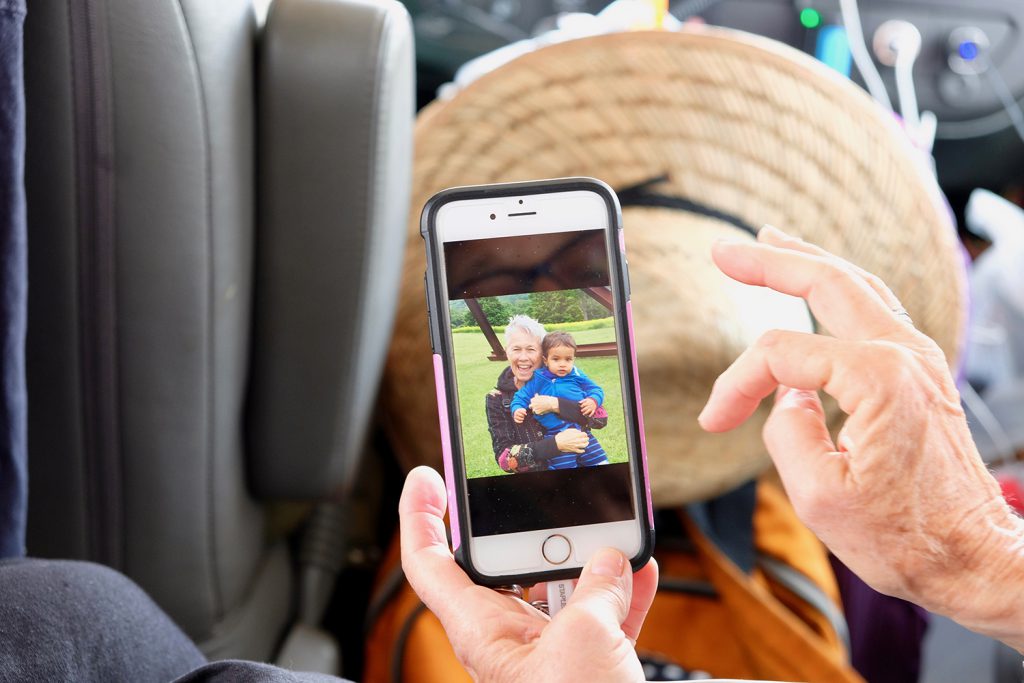 Claire Nelson shows off photos of her grandson on board. (Holly Honderich/Medill News Service)

The choice to partake in the week-long journey was not without sacrifice.

For Kali Bird Isis, there was a 300-mile drive through the night from Maine to meet the other grannies in New York.

The physical burden of such a trip – onerous by any standard – was exacerbated by Ms Bird Isis’s scoliosis, which makes long periods of immobility especially painful.

But while Ms Bird Isis said she had concerns regarding the trip’s physical toll, it proved to be a poor deterrent.

“I really wanted to do this. It mattered to me,” she said. 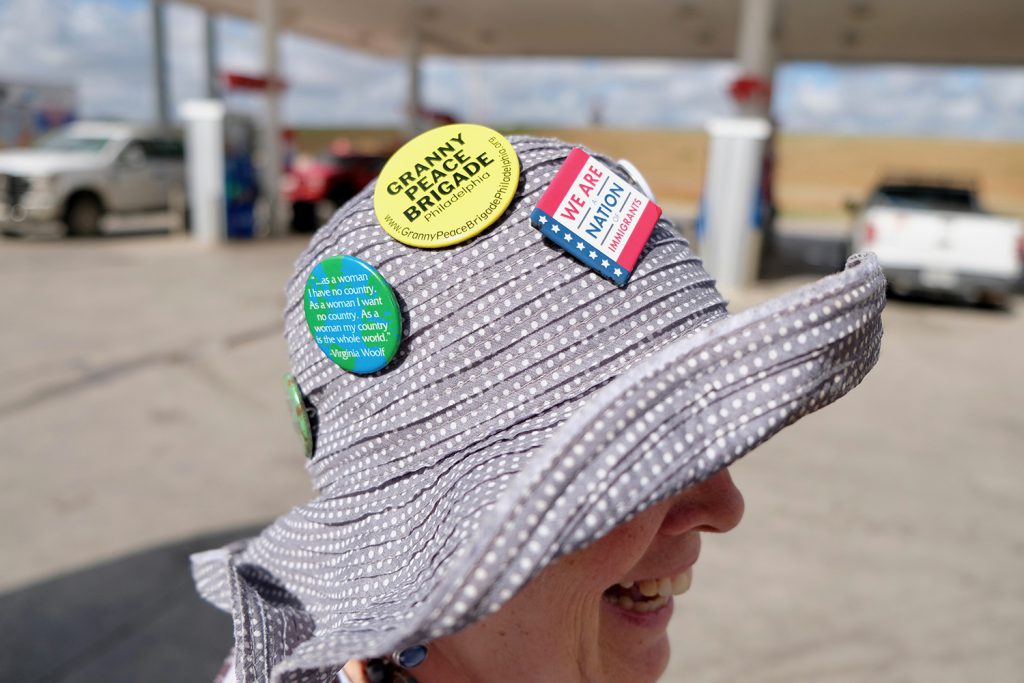 Other hurdles were emotional. Ms Mellen spoke of a deep introversion that shaped her life prior to her trip to the border.

But being in the group has helped her grow.

“This has been so life changing,” she said, “I really don’t feel like the same person.”

Grannies Respond was organised in less than six weeks, with several people enlisting just days before the trip began.

Their interactions – and congenial bickering – were marked by a degree of familiarity that comes about from a week in a confined space.

Questions and answers ricocheted between rows, taking several moments to reach their intended target. Subjects ranged from the 2018 midterm elections, to grandchildren, to the proper use of a hashtag on Instagram.

“This is a solemn journey we’re on, but there’s been quite a lot of joy,” said Ms Mellen.

They made an impromptu trip to the South Texas Family Residential Center in response to reports – dismissed by detention force ICE – that a toddler died just days after being released from the facility. 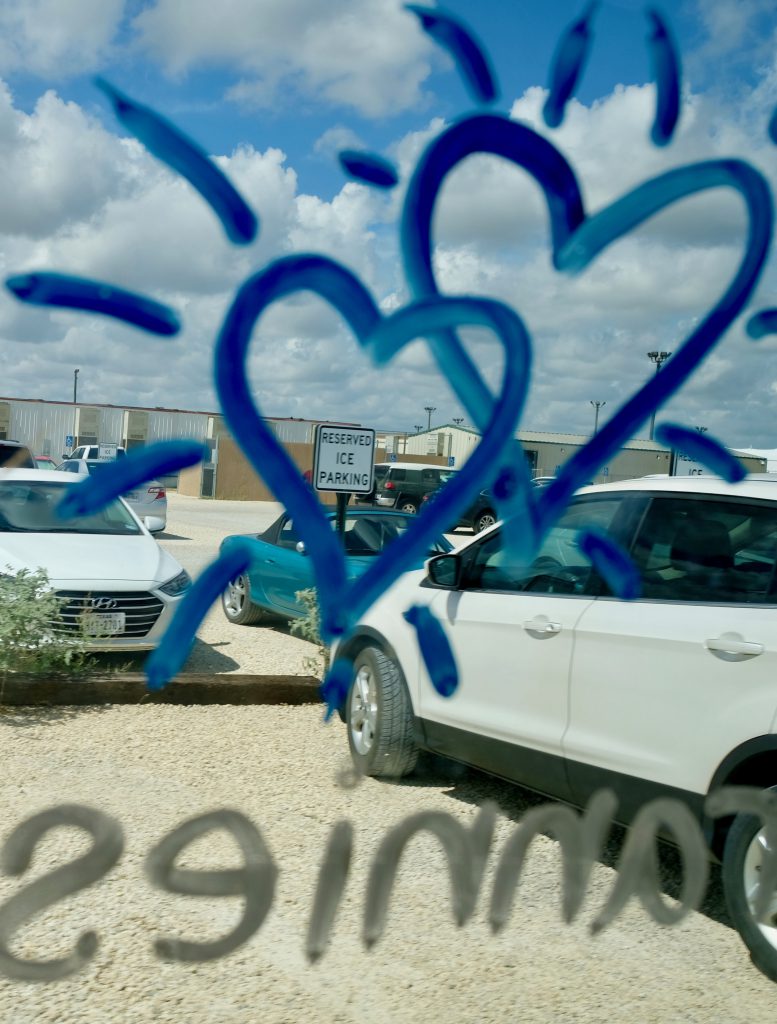 The Grannies made an impromptu stop at the South Texas Family Residential Center, the largest immigration detention center in the US. (Holly Honderich/MNS)

The caravan approached the centre with hopes of seeing the conditions inside, but was turned away.

“I knew we wouldn’t get inside, I was just surprised by how much it looked like a prison,” says Ms Iser. “It felt like they were hiding something.” 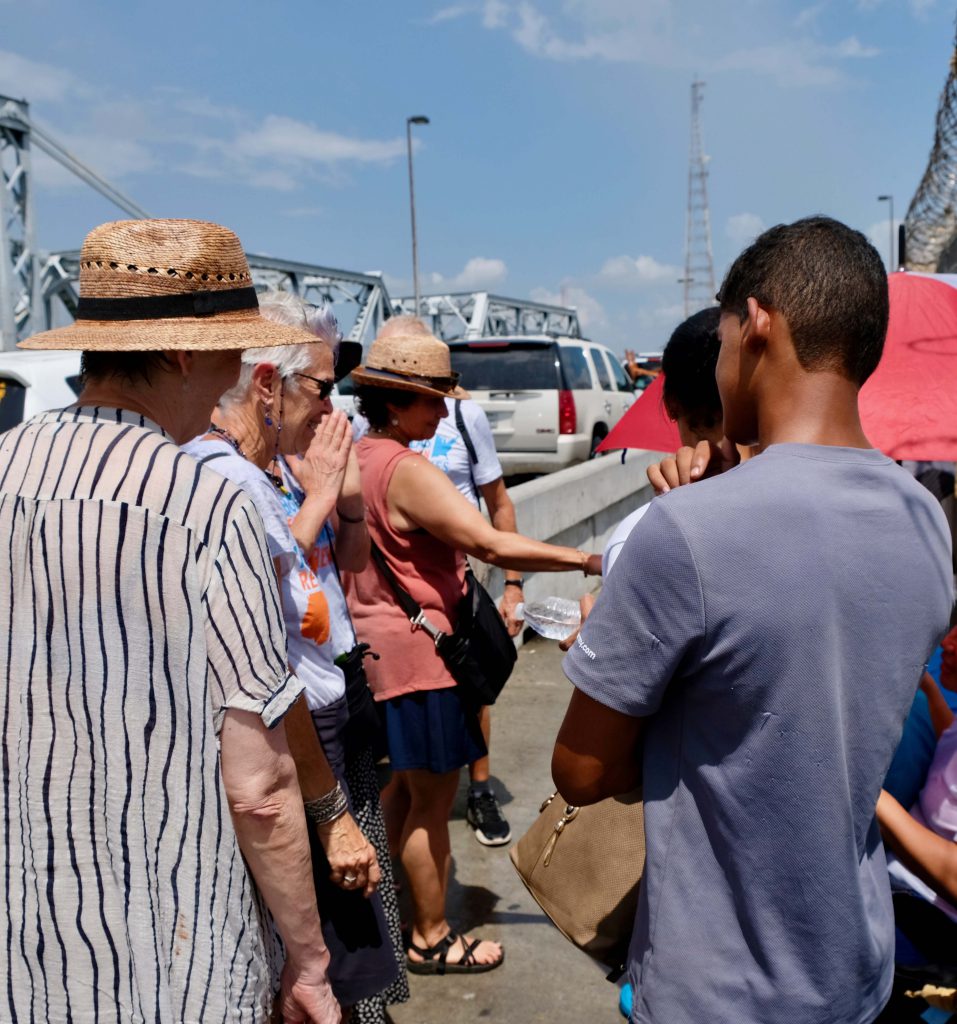 The Grannies visit with families just south of the US-Mexico border, as they wait to cross into the United States. (Holly Honderich/MNS)

The quick visit stoked the grannies’ abhorrence toward standing immigration and detention practices.

“I feel embarrassed to be an American,” Mr Nelson said. “Things have never been perfect in America… but at least there were some ideals that people stood up for.”

“It’s scary for our children and it’s scary for our grandchildren. What kind of world are they going to be living in?” added Mrs Nelson, whose parents fled to the US from the Nazi occupation of Austria.

To some degree, this sentiment sets these grannies apart from others in the Baby Boomer cohort.

A 2018 May study from Pew Research Center found that almost half of Baby Boomers – 44% – approved of Mr Trump’s job performance.

And while there has been an increase across all generations in the percentage that believes immigrants strengthen the country, these numbers steadily decrease with age, perhaps reflective of a generation in which only 28% are non-white.

On the campaign trail, then-candidate Trump’s pledge to crackdown on illegal immigration through deportation endeared him to voters and served as a reliable energiser for his base.

Still, among this group of grannies, collective memories recalled past atrocities in American history, and the duty of bystanders to act.

“I never knew the answer to that question. Now I do.”

Once in McAllen, the grannies went to work.

They packed backpacks with food, toiletries and other supplies for those who had come one step further in their journey – release from ICE custody.

Outside the McAllen bus station and at a respite centre run by Catholic charities, the grannies were allowed brief interactions with these families, whose lives remain in limbo even after release. After passing a “credible fear test,” their cases may now proceed through the immigration court system, the ultimate verdict still unknown.

“Who knows what the last month was for them?” asked Ms Bird Isis. “People were crying, we sang, and we embraced. We were saying ‘You’re welcome, you’re welcome here.'”

“These are not murderers and rapists and scary people. To be able to greet them with such love, it was amazing.”

Of all the time spent on board, these short moments in McAllen appeared most influential in strengthening the grannies’ resolve. Before the bus had reached its final stop, plans had commenced for the group’s next steps.

The “Above Ground Grannie Train” was one such idea, a prospective granny-led transport network that would help ensure immigrants’ safe passage to their next destination after release from detention.

“This changes the game for me,” says Ms Bird Isis. “We’re not just going to walk away from this.” 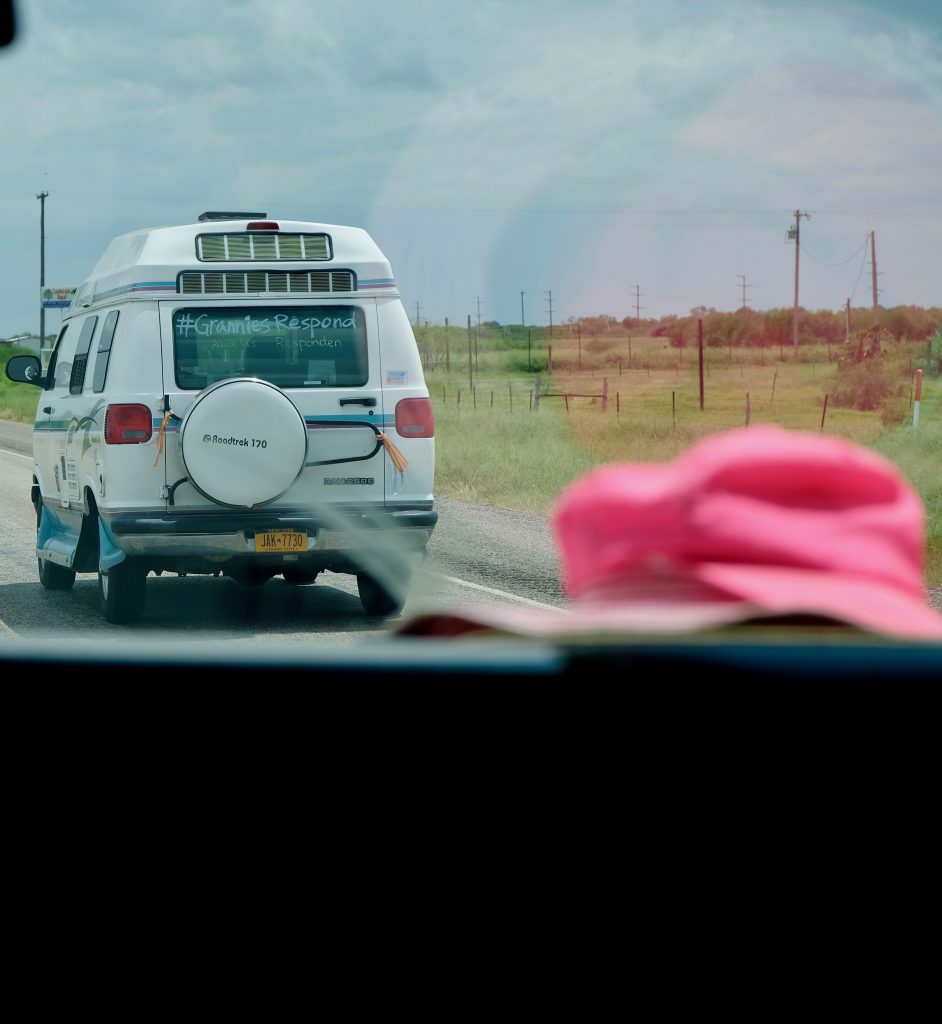