WASHINGTON – Many people — especially young people — are worried about whether Social Security will still be around when they are eligible to collect it, but fear not, even millennials will be able to receive benefits, retirement experts say, as long as action is taken to bolster the program.

“There is an underlying challenge: namely the retirement security as an issue is not getting attention as it deserves,” said Shai Akabas, director of economic policy at the Bipartisan Policy Center, which founded the Funding Our Future campaign with Edelman Financial Services to strengthen retirement policies.

The group hosted a series of speakers, “Planning for 75 at 25,” to discuss retirement policy, financial stability and the future of Social Security and Medicare, especially as it applies to young people.

Saving and investing for retirement should be a priority for Americans at any age, but it may be harder than it sounds. One of the most cited ways to save is through a workplace savings plan, such as a 401(k), but those aren’t widely available or utilized. Only 14% of companies had 401(k) plans for their employees in 2012, according to a January 2017 report from two U.S. Census Bureau researchers who reviewed all W-2 tax forms in the U.S., and those are mostly larger companies. Of those, only about a third of workers are contributing to those plans.

The projected shortfall in the combined Social Security trust funds, averaged over the trustees’ long-range (75-year) valuation window, is 2.84 % of its tax base of workers’ wages subject to the program’s payroll tax over this period, Blahous said. This equates to 21% of the program’s noninterest income, or 17% of its costs.

In order to bring back the full benefits of Social Security, lawmakers will have to make large adjustments, but the dilemma is that they would not prefer to cut the current benefits across the board, he said. They will have to cut 21% to give future generations full benefits.

Social Security has collected about $20.9 trillion in its history and paid out about $18 trillion, according to the Social Security Administration. It consists of two separate entities, the Old-Age and Survivors Insurance (OASI) Trust Fund, which pays retirement and survivors benefits, and the Disability Insurance (DI) Trust Fund, which pays disability benefits. The Social Security and Medicare Boards of Trustees estimate that the disability fund reserves will be depleted in 2032 and OASI reserves depleted in 2034. This is worrying for younger workers, but might not be as catastrophic as it sounds.

But the situation is still dire without practical legislative action to restore the Social Security program. “The meaningful question is not when do the trust funds run out, but how soon do we have to act if we are going to have even a remote chance, bringing the program back to balance,” Blahous said.

Kathleen Romig, senior policy analyst at the Center on Budget and Policy Priorities, also joined to calm millennials who panic about the approaching depletion dates that, “Social Security must look different for you. But by the time you retire, [it] will be here for you.”

The projected shortfall would be about 25% less than the $17,000 average benefits a year, which is is still unacceptable, she said. “It is urgent that we fix this problem.”

But Romig also said, while the short fall is real, it is also manageable. “The Social Security program has cost 5% of GDP, and is expected to only cost 6% of GDP for many years,” she said.

Typical millennials usually have low levels of savings, about $1,000 on average, so far, and have been chided for not saving enough, according to Monique Morrissey, president of Economic Policy Institute Economic. However, “people are actually saving about the same, but what they are trying to make up for is the loss of Social Security benefits and pensions,” she said.

To even up the projected shortages for Social Security, as well as Medicare, Romig and Morrisey said it an urgent priority for the country and Social Security should be strengthened through effective legislations. 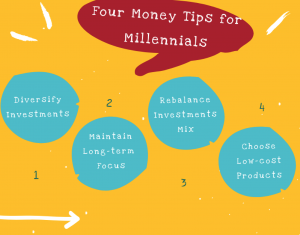 In light of the bleak future of retirement security, Ric Edelman, founder of Edelman Financial Services, gave a four-steps to help millennials get ahead of the savings curve.

First, people should establish diversification in investments, and there is no such thing as being totally safe. James Klein, president of the American Benefits Council echoed the importance of diversification from a policy perspective. The idea of importing features of traditional benefit pension plans into defined 401(k) plans makes it “not an either-or choice but a blend of it.”

Third, investors should rebalance their mix of investments — stocks, government, bonds, and cash — regularly, both by type and by time frame.

Finally, use low-cost investments as much as possible.

Regarding real-estate investments, the returns in this sector over the last 100 years are nowhere near as high as the returns on stocks, Edelman said. He suggested people not consider the home ownership unless they are going to stay at one place for seven to 10 years or more.