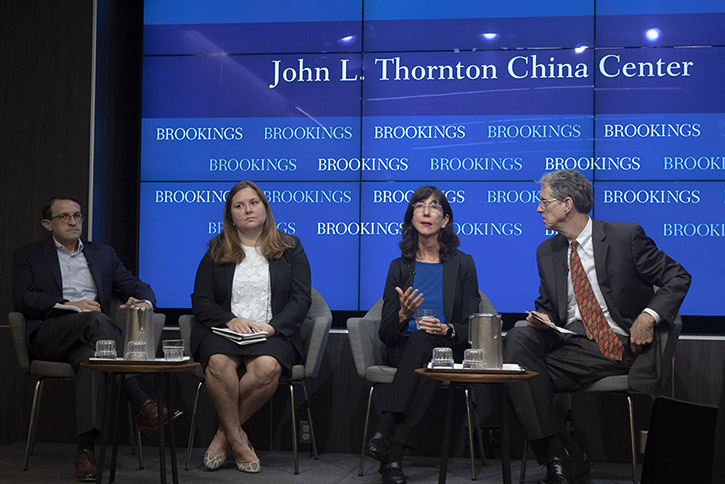 Experts at a panel about China's environmental plans at the Brookings Institute in Washington D.C.

WASHINGTON — As the largest carbon emitter in the world, China is working to lead in the fight against climate change, an environmental expert said Tuesday.

“China is affected by their own carbon emissions much more than any other countries,” said Carter Brandon, lead economist of Environment and Natural Resources Global Practice at The World Bank.

The effects of climate change and pollution already are noticeable in China’s air, water and soil. According to Cheng Li, director at John L. Thornton China Center, 60 percent of China’s groundwater is polluted and more than half of its water resources do not meet safe drinking standards.

However, China’s $300 billion clean energy industry is an innovator in renewable energy, according to Joanna Lewis, associate professor of science, technology and international affairs at Georgetown University. Last year, the country produced more solar power than fossil power and two-thirds of the world’s electric cars.

“Countries like the U.S. and China are not going to able to scale up renewable energy to the levels needed and called for in this urgent IPCC report unless they collaborate,” Finamore said.

President Donald Trump’s trade wars with China limit U.S. imports of renewable technologies such as solar energy in which China is the leading manufacturer.

“By 2017, the U.S. solar industry had almost disappeared, with 25 companies closing since 2012. Only two producers of both solar cells and modules, and eight firms that produced modules using imported cells, remained viable,” the report said.

Open markets will drive down the cost of solar energy and become an incentive for more widespread use, Finamore said.

She also criticized the Trump administration’s protectionist policies on intellectual property as limiting the ability for innovation. Information sharing was at an “all-time high” under President Barack Obama and now have “dwindled to almost nothing” she said.

“It is strategically better for them to collaborate openly,” she said. “The best thing both countries can do is scale up clean energy technology to the point where they can contribute meaningfully to climate protection.”