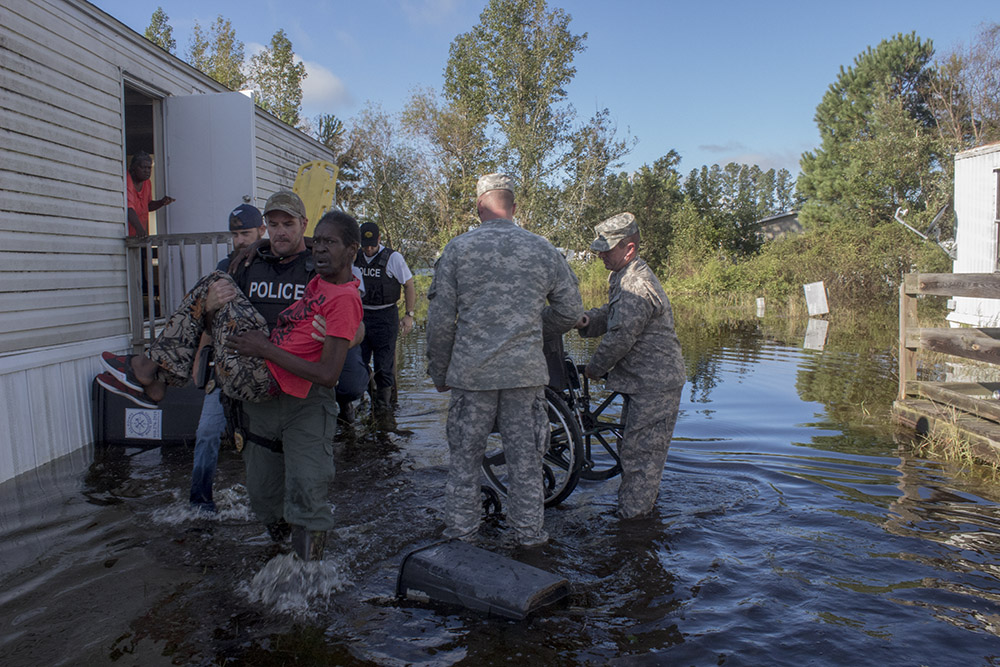 Members of the National Guard and Lumberton Police force rescue Eric Gilchrist, 65, from his trailer to take him to the hospital after experiencing breathing problems in Schoolview Mobile Home Park in Lumberton, N.C. Image by Patricia Nieberg.

A stale, metallic smell filled the air in the wake of Hurricane Florence as National Gurad troops and vehicles plowed through high floods to bring a sense of security and relief to Lumberton, N.C., — a beleaguered city nearly marooned from the rest of the state.

Soldeirs in camouflage powered through rising flood waters caused by Florence, now a tropical depression, driving Humvees and high-water rescue vehicles to help rescue stranded citizens —the only way to navigate through waters reaching the height of mailboxes.

After days of high winds and torrential downpours, water breached major highways that connect places like Lumberton, N.C., to the rest of the state. Many homes were surrounded by water within hours. Residents were unable to seek shelter without the assistance of military vehicles provided by the National Guard.

But this is the Guard’s other mission, a domestic one in times of crisis, and residents of this city and towns across the hurricane-ravaged region have come to realize that fact first hand as the troops came to their rescue

After the storm made landfall days ago, the National Guard unit stationed in Lumberton, about 50 miles south of Fort Bragg, was immediately briefed on Florence’s impending floods that many predicted would be reminiscent of Hurricane Matthew, the storm that swept across the same area in 2016.

According to Army Capt. Chris Jakubczak, the National Guard’s first priority was to warn residents to follow evacuation orders, especially those who lived along the banks of the Lumber River. Many residents followed orders, while others chose to stay for various reasons.

“We can’t make them leave,” Jakubczak said, “but we can strongly persuade them.”

National Guard units were deployed for an emergency response as early as last week. According to Army Col. Robert Carruthers, the National Guard’s mission to ensure the safety of American citizens domestically is as crucial as its mission abroad.

“Not a lot of people appreciate or understand that the National Guard also has this homeland defense and response mission in which we respond to natural disasters or terrorist events,” Carruthers said in an article on the U.S. Army’s official website. “That is equally important to the warfighting, but to those at home, this mission may be more important than the overseas mission.”

This dual mission is clear for 2d Lt. Nicholas Drake, who was one of many National Guard members deployed to Lumberton for the storm.

Drake has more 12 years of experience in the Army Reserve and National Guard. He has been deployed twice, including once to Iraq in 2007. He earned the rank of staff sergeant by the end of his prior enlistment from 2000 to 2010. In 2015, he was commissioned as an armor officer in the National Guard, so he could accomplish missions both at home and abroad.

Elizabeth Morales, a resident of south Lumberton, recognized the efforts being made by Drake and the other members of his unit. She said she thinks the National Guard has been the most present sense of security forthis community since the onset of Florence.

“They are amazing. They’ve done more for Lumberton than Lumberton has done for Lumberton,” Morales said. “I’ve seen those [National Guard] trucks there more than anyone since I’ve been home.”

The trust Morales has in the Guard can be attributed, in part, to behind-the-scenes coordination with the Lumberton police force. Their role working together bridged the gap between residents and first responders, aided by their intimate knowledge of the landscape and community.

“The Lumberton Police takes the lead and the National Guard is there to provide support and assistance,” Drake explained. “It may be as simple as providing a vehicle escort to places they can’t reach, serving as a patrol presence in their communities or being prepared to intervene and prevent crime.”

The National Guard expects to remain in the Lumberton area until the end of the week to continue rescue and recovery efforts. Everyone involved hopes Lumberton and areas affected by flooding will return to normalcy soon.

“Lumberton is strong don’t get me wrong,” Morales said. “Be here when all this water subsides, and you’ll see how everybody comes together.”