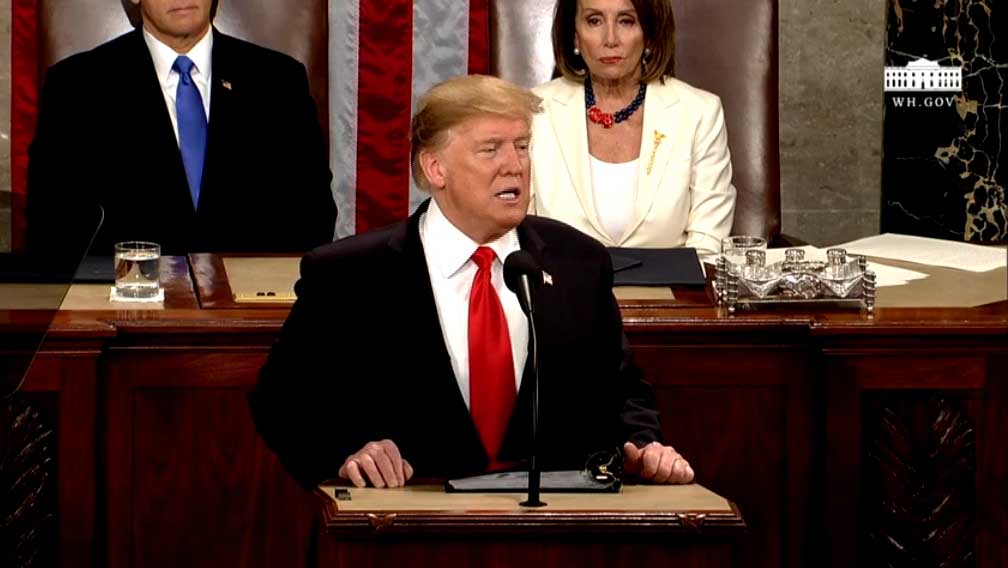 While touting a number of self-described economic victories, Trump said his renegotiation of NAFTA assisted workers in states like Indiana “whose dreams were shattered” by the previous trade deal’s impact on manufacturing jobs.

Rep. Andre Carson, D-Indianapolis, said that while workers in the Midwest were adversely affected by NAFTA, Trump’s tariffs against foreign goods have slowed gains for labor.

Farmers in Indiana have taken a hit from retaliatory Chinese tariffs in the era of Trump’s trade wars. Farm bankruptcies in Indiana grew 36 percent last year despite a national decrease, according to recent American Farm Bureau data.

Republican Rep. Susan Brooks of the 5th District, which includes Noblesville, Fishers, Carmel and Anderson, said the need for Trump’s tariffs have passed despite their initial help in countering China.

“I think that for a short period of time some of these fights have been necessary,” Brooks said. “But I think in the long run we need to wrap them up. Wrap up the trade negotiations and move forward.”

Brooks attributed the economy’s success to deregulation and tax reform under Trump that has encouraged private enterprise.

“We know there is just so much more confidence in the economy,” Brooks said, “and the number of jobs that have been added and the fact that unemployment is at historic lows is just what’s so very positive.”

Carson, however, argued that current economic growth and stability is thanks to the efforts of former President Barack Obama

“I think that the economic gains that (Trump is) taking credit for are continuing only really because most of the president’s damaging economic policies have not taken effect,” Carson said.

Brooks on infrastructure spending: ‘music to my ears’

Trump offered Democrats other bipartisan economic proposals during the speech, such as a new infrastructure spending plan. Obama used multiple State of the Union speeches to plea for a bipartisan infrastructure bill, only for the legislation to stall in Congress.

Brooks said Trump’s appeal for bipartisan infrastructure spending was “music to my ears.” Carson, though, said he expected more from the president.

Eight percent of Indiana’s bridges are structurally deficient, and the state’s water supply will require $5.9 billion in investment over the next 20 years, according to the American Society of Civil Engineers.

Yet Republican Indiana Sen. Mike Braun, who sits on the Senate’s influential Environment and Public Works Committee, pushed back against a sweeping infrastructure program Tuesday afternoon, advocating for a greater role by private enterprise and individual states.

“The federal government is probably in the least position ever to take on something as capital intensive as infrastructure when they’re running trillion-dollar deficits,” Braun said.

“If we do not make that a top priority, we’ll have too many parts of this country that will fall behind,” Brooks said. “In order to keep up with the world, we’ve got to make sure we do a better job with broadband.”