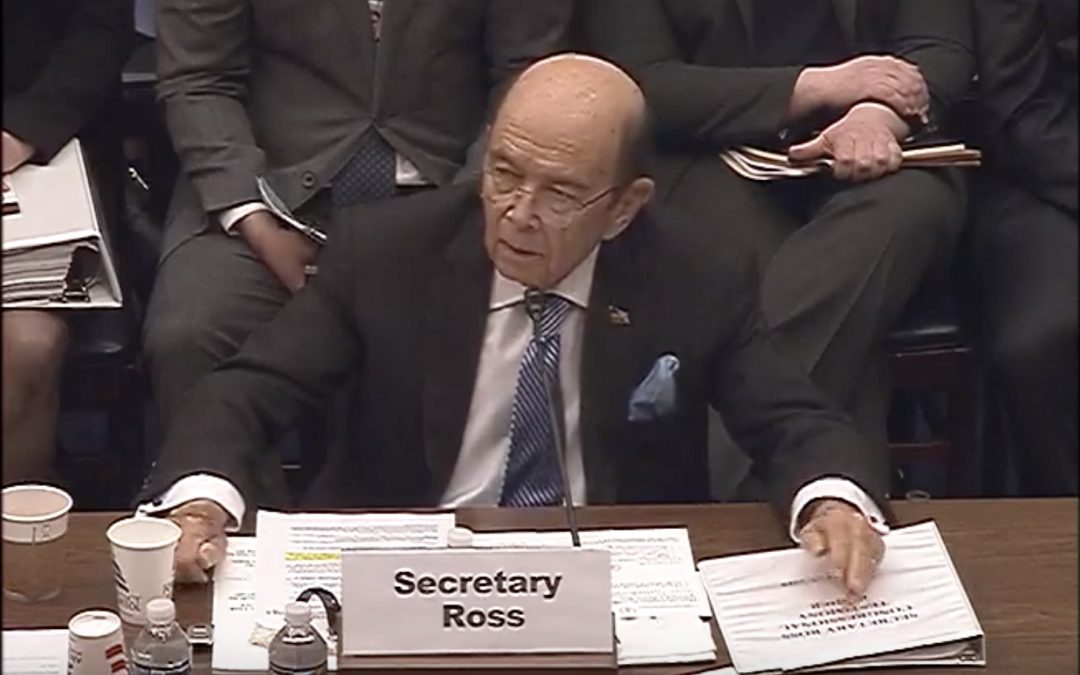 Commerce Secretary Wilbur Ross denied that there was any “nefarious purpose” behind the Trump administration’s addition of a citizenship question to the 2020 census in an appearance Thursday before the House Oversight Committee.

Ross directed the Census Bureau last year to include the question, purportedly at the behest of the Department of Justice, which requested the question’s inclusion in December 2017. However, Democrats say that documents released as part of a lawsuit show Ross asked the Justice Department to make that request.

Ross repeatedly denied that this was the case as Democrats on the committee grilled him about documents dating back to early 2017.

“What I was referring to was that I was frustrated that I had not gotten an answer to the question ‘Would the Department of Justice formally request the question to be re-instituted or not?’” Ross said. “That’s what I had in mind.”

Ross turned over 8,700 documents to the committee, but Democrats on the committee said they were missing many documents that were relevant, including emails and memos and accused Ross of lying under oath.

“So far the committee has been unable to get a copy of these documents despite multiple requests and interviews with your staff and with Department of Justice staff,” said Rep. Mark DeSaulnier, D-Calif. “We need your commitment, your full commitment, with these specific communications that we’ll get cooperation to get to the facts. Otherwise, it’s hard for us not to conclude that you’re, at the very least, obfuscating, your role in what you said in front of this committee.”

The Justice Department said the question was necessary in order to effectively enforce the Voting Rights Act. House Democrats are skeptical about those motives.

“I do not know anyone who truly believes the Trump administration is interested in enhancing the Voting Rights Act,” said Chairman Elijah Cummings, D-Md. “This administration has done everything in its power to suppress the vote, not to help people exercise their right to vote.”

Ross denied that he was hiding any ulterior motives.

“If I had a nefarious purpose, I surely wouldn’t have added $3.2 billion to the budget of the census,” Ross said.

Ross agreed to testify voluntarily only after several weeks of discussions, according to Democrats on the committee.

Since information from the census determines boundaries of congressional districts and allocation of electoral votes for the following 10 years, opponents of the question are concerned that non-citizens would be deterred from completing the census if the question was included and immigrant communities would thus be under-counted and under-represented in government.

Ross said the census bureau was already trying to reach these communities.

“My team has initiated a $500 million advertising campaign to assure hard-to-count communities that the census is safe, secure, vital, and that all collected data is used for statistical purposes only and cannot be shared with law enforcement bodies,” Ross said.

“For the life of me, I don’t why the Democrats don’t want to know how many citizens are in this country,” said Rep. Jim Jordan, R-Ohio, who suggested the census should go even further in it’s questioning.

“While I strongly support asking if a person is in this country legally, I am satisfied the public policy goal of enforcing the Voting Rights Act can be accomplished with just the citizenship question,” said Jordan.

Earlier this month, the Supreme Court agreed to hear a challenge to the administration’s decision to add the question on the 2020 census. Two federal judges blocked the inclusion of the question earlier this year.

The last time the Census Bureau asked all U.S. households a question about citizenship was 1950.