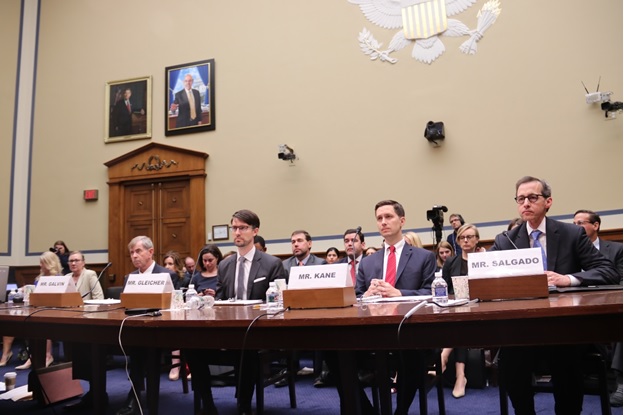 From left to right: Bill Galvin, Secretary of State of Massachusetts; Nathaniel Gleicher, Facebook’s head of cybersecurity policy; Kevin Kane, Twitter’s public policy manager; and Richard Salgado, Google’s director of law enforcement and information security wait to testify before the House Oversight and Reform’s subcommittee on National Security. The representatives from the online platforms were questioned about who is deciding how these platforms are monitored (Dwight A. Weingarten/Medill).

WASHINGTON – The head of the Federal Election Commission on Wednesday called on Congress to set standards for social media platforms to reduce election interference, but officials of Twitter, Facebook and Google defended their efforts in combating disinformation and promoting transparency.

Faith in the electoral process “cannot be restored by Silicon Valley,” FEC Chair Ellen Weintraub told the national security subcommittee of the House Oversight and Reform Committee. “[It’s] not something that we can leave in the hands the tech companies, the companies now being used by our foreign rivals to attack our democracy.”

Rep. Mark DeSaulnier, D-Calif., said his relationship with the tech companies “has soured” and asked one of the witnesses, Massachusetts Secretary of State Bill Galvin: “How do we hold them accountable?”

“Congress going forward has a role to play in terms of monitoring,” Galvin said, and suggested regular scrutiny of the platforms and updates.

“It’s very hard, obviously at the same time you want to protect people’s freedom of speech,” he said.

Twitter public policy manager Kevin Kane said the company has made significant changes since the 2016 election in order to more aggressively monitor accounts. He said 425 million Twitter accounts were investigated in 2018 and that 75 percent of the accounts investigated were ultimately suspended.

He and officials from Facebook and Google emphasized their improved algorithms used identify behavior intended to do harm.

Facebook’s head of cybersecurity policy, Nathaniel Gleicher, said the company has nearly 40 different teams focused on election work, with three times more people working on safety and security than in 2017.

“We think that the platforms are trying,” said Weintraub.

She noted the Federal Election Commission sometimes cannot move to address issues as quickly as the companies can, but said the federal government has a duty to provide oversight of election security.

“Government has a role here to set standards,” Weintraub said.  “I really don’t think we should leave it in the hands of the private sector.”

The chair of the Freedom Caucus, Rep. Mark Meadows, R-N.C., asked the companies to provide the committee with a plan to increase their transparency and accountability around elections.

“We don’t know what you do and what you don’t do,” he said. “The days of freelancing on this…are over.”