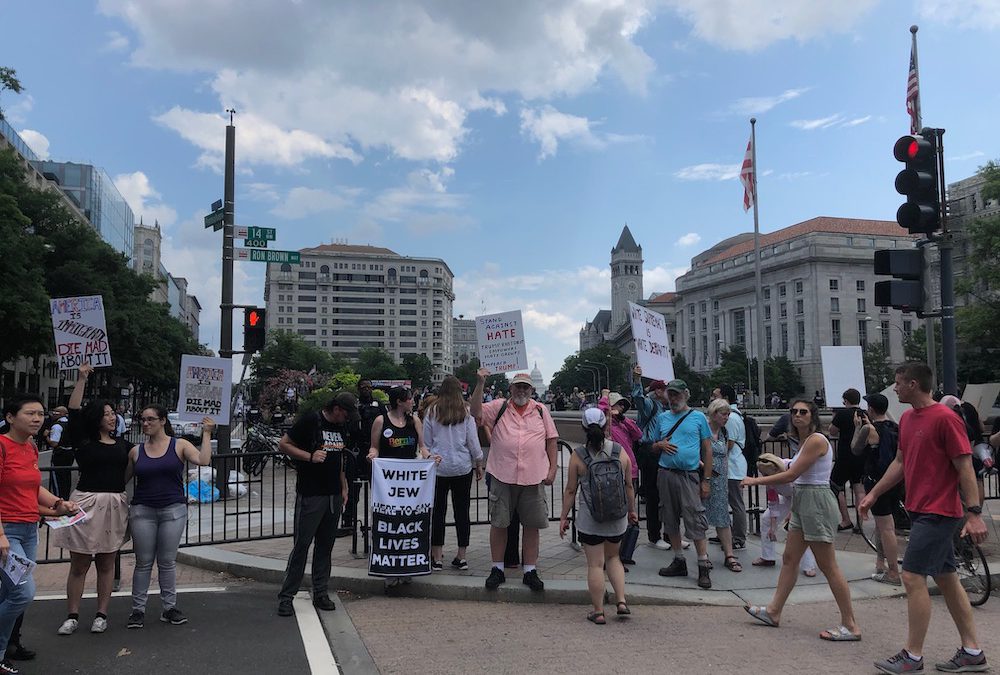 WASHINGTON – More than 200 Trump supporters from Proud Boys, an alt-right group, and a larger number of counterprotesters confronted each other Saturday during a pro-Trump rally at the Freedom Plaza, and some minor scuffles broke out but no one was arrested.

The counterprotestors, a coalition of advocacy groups including Black Lives Matter, got to Freedom Plaza first, at about 10 a.m. The counterprotest was organized by All Out D.C. Members of the anti-fascist movement, antifa, were also present.

“Our goal is to outshine the hate and bigotry message that’s going to be brought by the alt-right and the Proud Boys,” said Black Lives Matter organizer NeeNee Taylor.

The right-wing group Proud Boys was in the capital for a “Demand Free Speech” event to advocate for “unbiased social media and an end to censorship,” according to the group’s website, after tech companies cracked down on hate speech.

Many speakers from left-wing groups, including La ColectiVA and D.C. United Against Hate, addressed the crowd. “We will drown them out with go-go music – with the true sound of D.C.,” said an activist, who asked not to be named for fear of retaliation. Go-go music blared through Pershing Park while some participants danced along.

“The truth is, we don’t start fights, we finish them,” McInnes said. “We are pro-Trump in an era when everybody hates Trump, especially in this city. So, they want to shut us down with lies about hate speech.”

Last weekend, the Proud Boys clashed with counterprotesters, including members of a Portland chapter of antifa. A member of the group attacked conservative journalist Andy Ngo, hospitalizing him. According to organizers of the Demand Free Speech rally, Ngo was at the All Out D.C. event.

The Southern Poverty Law Center has called the Proud Boys an alt-right fight club and “hate group.” The group has faced social media bans on Facebook, Instagram and Twitter.

McInnes poked fun at antifa activists, calling them “unworthy adversaries.” He also suggested that activists on the right could be doing more to fight back.

“They can’t arrest us all. Let’s get in trouble. Let’s fight. Let’s step into the fray,” McInnes said.

Former Breitbart editor Milo Yiannopoulos also spoke at the event, wearing a black wig, blue T-shirt, lipstick and penny loafers, introducing himself to the crowd as right-wing commentator Laura Loomer. He poured scorn on the idea that the Proud Boys espoused violence.

“If they were a violent street gang, do you think you’d still be alive?” Yiannopoulos said.

Clashes between the groups were limited to a few minor scuffles and arguments, with some pushing and shoving on both sides. As of 4 p.m., police spokeswoman Alaina Gertz said, no arrests had been made.

U.S. Park Police searched the bag of one of the counterprotesters, removing a hammer and crowbar.

The D.C. Metropolitan Police Department declined to discuss tactics ahead of the rally on Saturday but said that its Special Operations Division would participate. There was a strong police presence from the Park Police, and local and federal partners. A police barrier separated the opposing rallies.