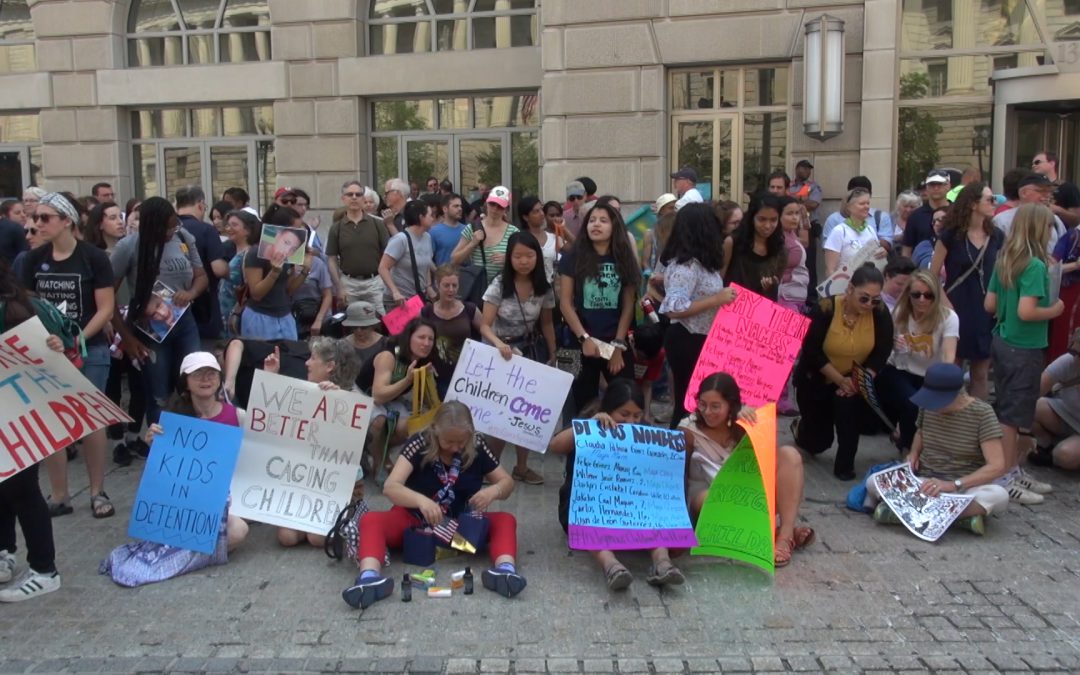 Community members and residents at protest to protect children at border. (Thomas Ilalaole/MEDILL)

“Up, up with liberation! Down, down with deportation!” the demonstrators chanted while carrying signs that read, “Stop Murdering Indigenous Children” and holding up photos of indigenous children who died crossing the border or in CBP custody — the youngest of whom was 2 years old.

Juanita Cabrera Lopez, executive director of the International Mayan League and one of the organizers of the rally, said conditions have worsened since the nationwide protest against family separation last June. After the photo of a drowned Salvadoran father and daughter was published last week, Lopez said, the community became even more outraged.

Demonstrators called for more humane conditions, clearer monitoring of detention center activity and further investigations into all previous deaths at the border. They also demanded access to indigenous language translators for migrants.

For instance, many Maya children from Guatemala speak neither Spanish nor English so they do not understand what is happening when they are stopped at the border. “Because our identity is erased when we cross the border and we’re mislabeled as Latino and Hispanic, our particular vulnerabilities are not identified,” said Lopez, who is Mayan.

This language barrier played a part in the death of Jakelin Amei Rosmery Caal Maquin, a 7-year-old Maya Q’eqchi’ girl from Guatemala who died in CBP custody in December, according to Lopez.

“Her father was forced to sign an English-only document. He barely could speak Spanish,” she said. “There still is an investigation that is pending in her death, but we believe her death was because they couldn’t communicate her medical needs.”

Nicholas Marritz, staff attorney at the Legal Aid Justice Center, said the U.S. needs an immigration policy that is humane and that makes it easier for undocumented immigrants to enter the U.S. and apply for legal status.

“People say they should’ve come legally and get in line,” he said. “We want the government to make a line for people to get into.”