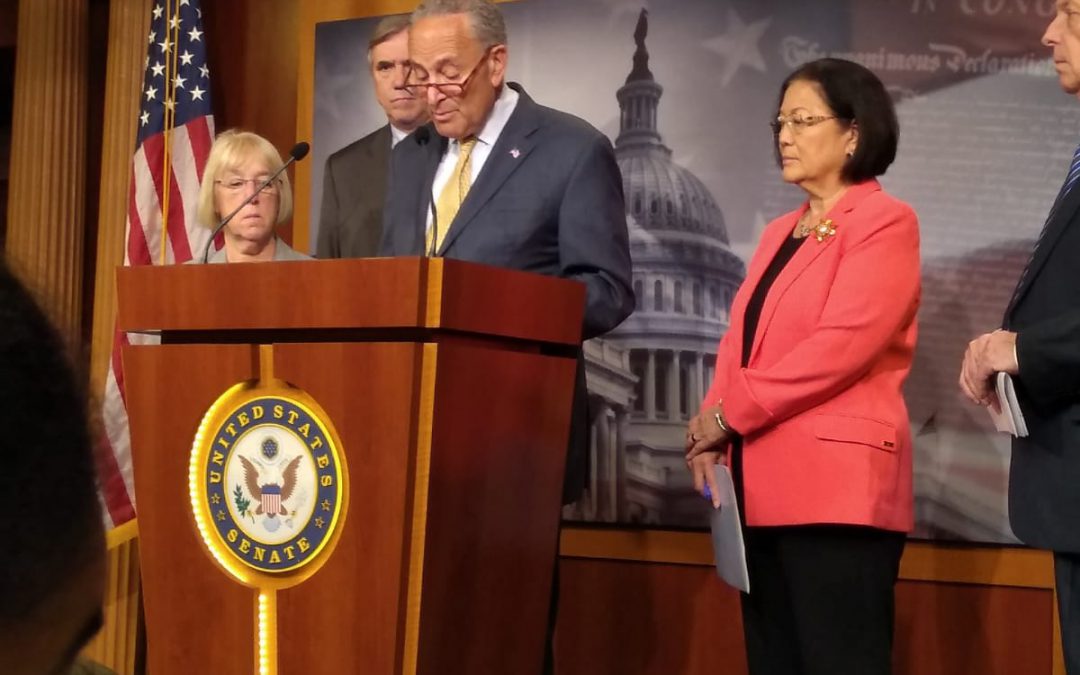 “I just have one question for the administration. Have you no shame to mistreat children and families this way?” asked Durbin at the press conference, flanked by Sens. Jeff Merkley of Oregon, Patty Murray of Washington state and Mazie Hirono of Hawaii.

Durbin criticized the Trump administration for what he called a conscious policy decision to say that the “door is closed in the United States for asylum seekers.”

Schumer indicated that the bill had more than 30 Democratic co-sponsors, including all the Democratic senators vying for the presidential nomination.

The bill would require medical assessments by trained personnel for children taken into custody by the Department of Homeland Security and the provision of basic hygiene products such as soap, a toothbrush, a change of clothes and access to showers and toilets at Customs and Border Protection facilities. It also would require CBP to provide three meals a day that meet the Department of Agriculture’s Nutrition Standards for School Meals.

“If Leader McConnell puts it on the floor it will pass,” Schumer said. “McConnell can block anything. But he shouldn’t countenance this kind of cruelty.”

Both Durbin and Schumer condemned the ICE raids to round up undocumented families in major cities that President Donald Trump announced recently. Raids are expected in Chicago over the weekend.

Questioning the efficacy of the raids, Durbin said they were simply because of a “deterrent policy.”

“The president denies the inhumane conditions in these camps…..he disregards reports from his own administration,” he said, pointing out the unsanitary conditions and alleged abuse present in these camps.

“How we treat (the migrants) is so un-American. Every American should be ashamed,” Schumer said.

Hirono choked up while speaking about the drowning of an immigrant father and his 23-month-old daughter in the Rio Grande river in Mexico. The photographs of the father and daughter lying face down near the river renewed heated debate about immigration.

“If you were not appalled by these pictures, something is dead or dying in your heart,” a visibly emotional Hirono said.