Advocates push for banks to be allowed to serve cannabis businesses 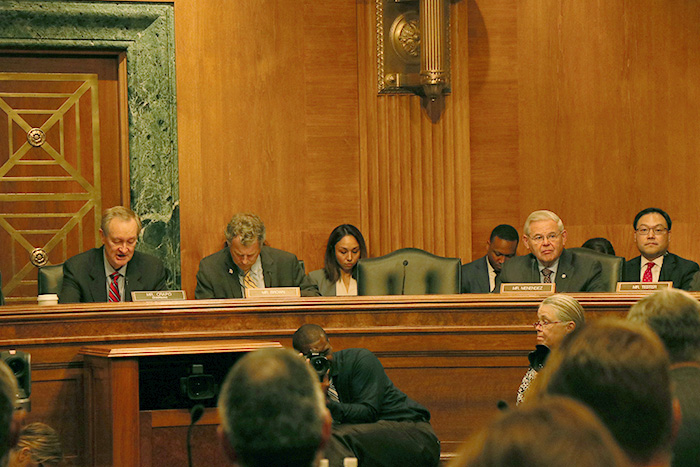 The Senate Banking, Housing and Urban Affairs Committee debated the challenges for cannabis businesses to get access to the banking system. (Lu Zhao/Medill)

WASHINGTON – Owners of cannabis companies told a Senate committee Tuesday that they are forced by federal law to operate as cash-only businesses, making it difficult to pay taxes and creating safety concerns. But an opponent said changing banking laws would allow the industry to vastly expand marijuana sales at the expense of health precautions.

The Senate Banking, Housing and Urban Affairs Committee debated the challenges for cannabis firms to use the banking system. Although 46 states and the District of Columbia allow some form of cannabis sales and use, it is still illegal under federal law.

Sens. Cory Gardner, R-Colo., and Jeff Merkley D-Ore., have proposed a bill to protect banks that service cannabis-related businesses in states where it is legal and provide the cannabis industry access to the banking system.

Because of federal law, there are barriers for the cannabis industry to obtain financial services.

“We have frequently struggled to obtain and maintain bank accounts with egregiously high fees,” said John Lord, owner and CEO of LivWell Enlightened Health, one of the largest cannabis companies in Colorado. “Because of the current status of the law, we are forced to operate as an all-cash business.”

The all-cash situation and lack of access to the banking system have reduced the efficiency of tax collections and the financial transparency of the cannabis industry, according to Lord and others.

In order to deal with a large amount of cash, Lord said, he has to rent out a building to store the cash. To send taxes to the federal government, he once traveled to Denver with more than $3 million in cash, which took more than three hours for tax officials to count.

Operating on a cash basis also is a safety concern, he said, noting that a security guard at a dispensary in Aurora, Colorado was shot to death during a robbery attempt in 2016.

But Garth Van Meter, lobbyist for Smart Approaches to Marijuana, a nonprofit advocating for a public health approach to addiction and recovery, questioned the public health effects of the bill.

“Does anyone think that public health is going to be the driving force behind these multinational corporations who have to report quarterly earnings?” Van Meter said. “The [bill] will allow the expansion of an industry pushing new, exponentially more powerful forms of marijuana before any of its health or other societal impacts are fully understood.”

The next step for the bill would be a vote in the full Senate, which has to be scheduled by the Majority Leader Mitch McConnell.