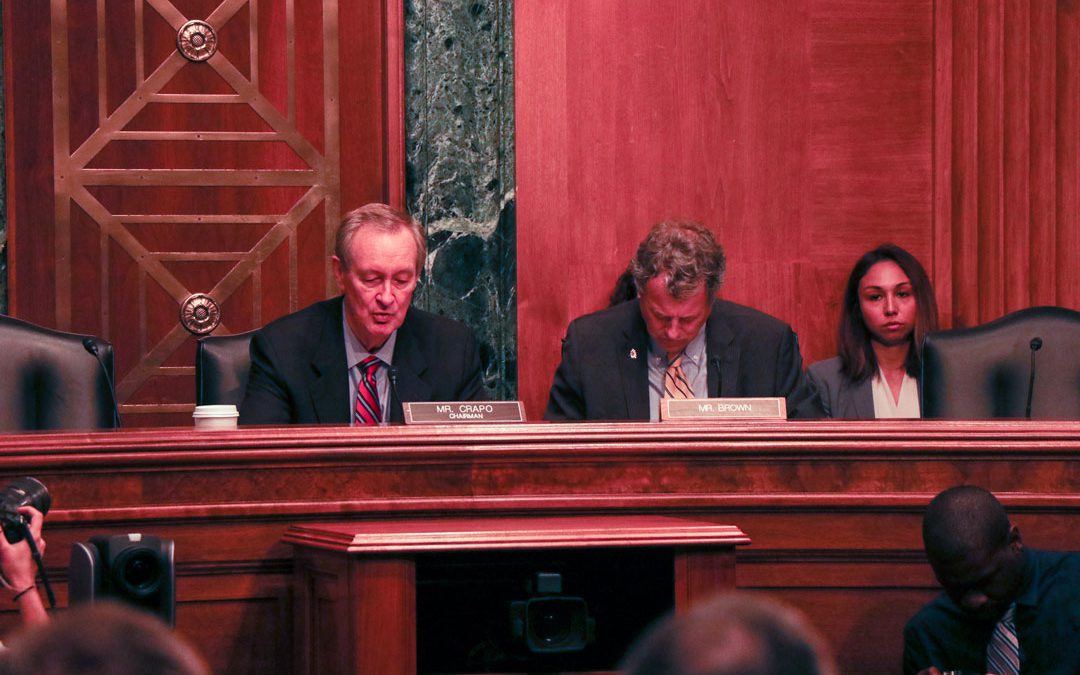 Cannabis-industry players on Tuesday voiced support for a bill that would protect banks that aim to serve the sector, as one industry veteran told a Senate panel that not having a bank forced him to pay a $3 million tax bill in cash.

Since marijuana remains illegal at the federal level, federally-regulated banks are hesitant to serve cannabis businesses even in states where cannabis is legal. As a result, many of these businesses operate solely in cash, making them targets for theft and making it difficult for the government to ensure all taxes are being paid.

Rachel Pross, chief risk officer at Oregon-based Maps Credit Union, told lawmakers that a recent analysis found that without being banked, one in every two cannabis dispensaries gets robbed or burglarized.

Joanne Sherwood, chairwoman of the Colorado Bankers Association and the president and CEO of Denver-based Citywide Banks, said the “federal-state divide” has “severe repercussions for banks and communities like mine, where the cannabis industry is fully operational.”

Sherwood and Pross expressed support for the Secure And Fair Enforcement (SAFE) Banking Act, which would allow banks to serve the cannabis industry without fear of federal punishment. Pross, who was testifying on behalf of the Credit Union National Association, emphasized that the issue of banking for the cannabis industry affects financial institutions across state lines.

“Every time an employee of a cannabis-related business uses his or her paycheck to buy something as benign as groceries, the local Arkansas or Idaho bank or credit union depositing the company’s profits gained from those sales is directly impacted by the dilemma before this committee today,” the credit union executive said.

Sherwood said processing taxes paid in cash at a local Internal Revenue Service office is 17 times more expensive than e-filing, as she also highlighted the cost of increased security needed to protect those offices.

John Lord, the owner and CEO of Colorado-based LivWell Enlightened Health, said he once rented out a former bank that had a vault in order to store his cannabis company’s cash. Another time, he said he had “no choice but to go to the local IRS office with more than $3 million in cash to pay federal taxes.”

Lord, who is chairman of the Cannabis Trade Federation, also stressed that many small cannabis businesses cannot afford the extra cost associated with cash management and the “exorbitant bank fees.”

Pross said allowing banks to service cannabis businesses would not only increase transparency, but it would also help financial institutions better monitor any suspicious activity and provide data for law enforcement to more efficiently go after bad actors.

Only two Republican senators were in attendance at the hearing — the committee’s chairman, Sen. Mike Crapo of Idaho, and one of the SAFE Banking Act’s co-sponsors, Sen. Cory Gardner of Colorado.

Tom Nolasco, director of legal and strategic initiatives at the National Association of Cannabis Businesses, said it was “disheartening” to see such little GOP representation, but he expressed hope that Senate Majority Leader Mitch McConnell, the Kentucky Republican, still might be convinced to bring the bill to the Senate floor. After the hearing, analysts remained downbeat on the legislation’s prospects in the current Congress.