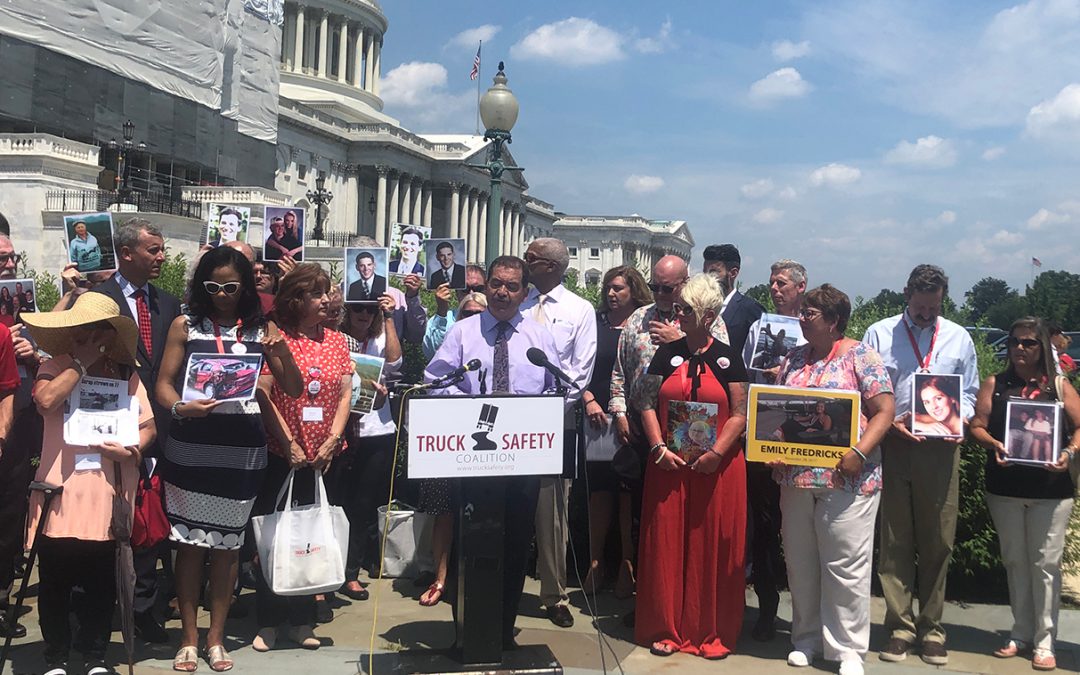 WASHINGTON – Kate Brown of Gurnee, Illinois, will never forget the Monday morning in May 2005 when she received a phone call and was told that her 27-year-old son was hit by a truck when he was driving in a car in Round Lake, Illinois. 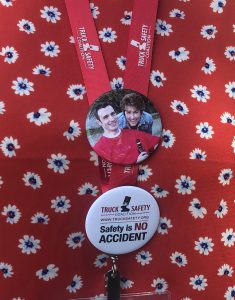 A badge with a picture of Kate and Graham on Kate’s chest. (Kimberly Jin/MEDILL)

The truck driver had fallen asleep before he hit Graham Brown’s car. A crack pipe was found in the truck and cocaine and alcohol were detected in the driver’s urine sample.

Brown, unconscious, was airlifted to a hospital in Milwaukee, Wisconsin and underwent an eight-hour surgery just to stabilize his condition. His left arm was nearly amputated. Since then, he has gone through 22 surgeries and three years of physical and occupational therapy. He still suffers from chronic post-traumatic stress disorder and widespread pain throughout his body.

Kate Brown, 64, told a Capitol Hill press conference last Tuesday that the crash not only torn apart her family emotionally, but also devasted the family financially as they dipped into retirement savings to pay off an accumulated medical bill of approximately $5 million. The trucking company’s insurer only paid $750,000 – the minimum insurance liability required under a 1980 federal law.

The compensation was “absolutely not adequate,” Kate said.

The minimum insurance level for commercial trucks has not been updated since 1980. But the prices for medical care have jumped six-fold since 1980, according to the Consumer Price Index by the U.S. Bureau of Labor Statistics.

“It is flat wrong that the minimum insurance required to help families cope with deaths or life-long physical and emotional traumas…was never set to adjust for inflation,” said Rep. Chuy Garcia, D-Ill.

Garcia introduced legislation to increase the minimum insurance level for large trucks to $4.9 million per crash, accounting for the medical cost inflation since 1980 and future indexing. A large truck, according to the Department of Transportation, is defined as a truck with a gross vehicle weight rating greater than 10,000 pounds.

“The intended protective mechanism of federally-required minimum levels of insurance, however, has never adequately performed its intended function.,” wrote an undated document by the Federal Motor Carrier Administration. “The amount was never set at a sufficiently high level to require insurance companies to seriously underwrite motor carriers and require safe operations before agreeing to insure them and, over time, the minimum amount has become a very sad joke.”

The DOT uses a $9.6 million value per statistical life in evaluating all ruling-making initiatives. 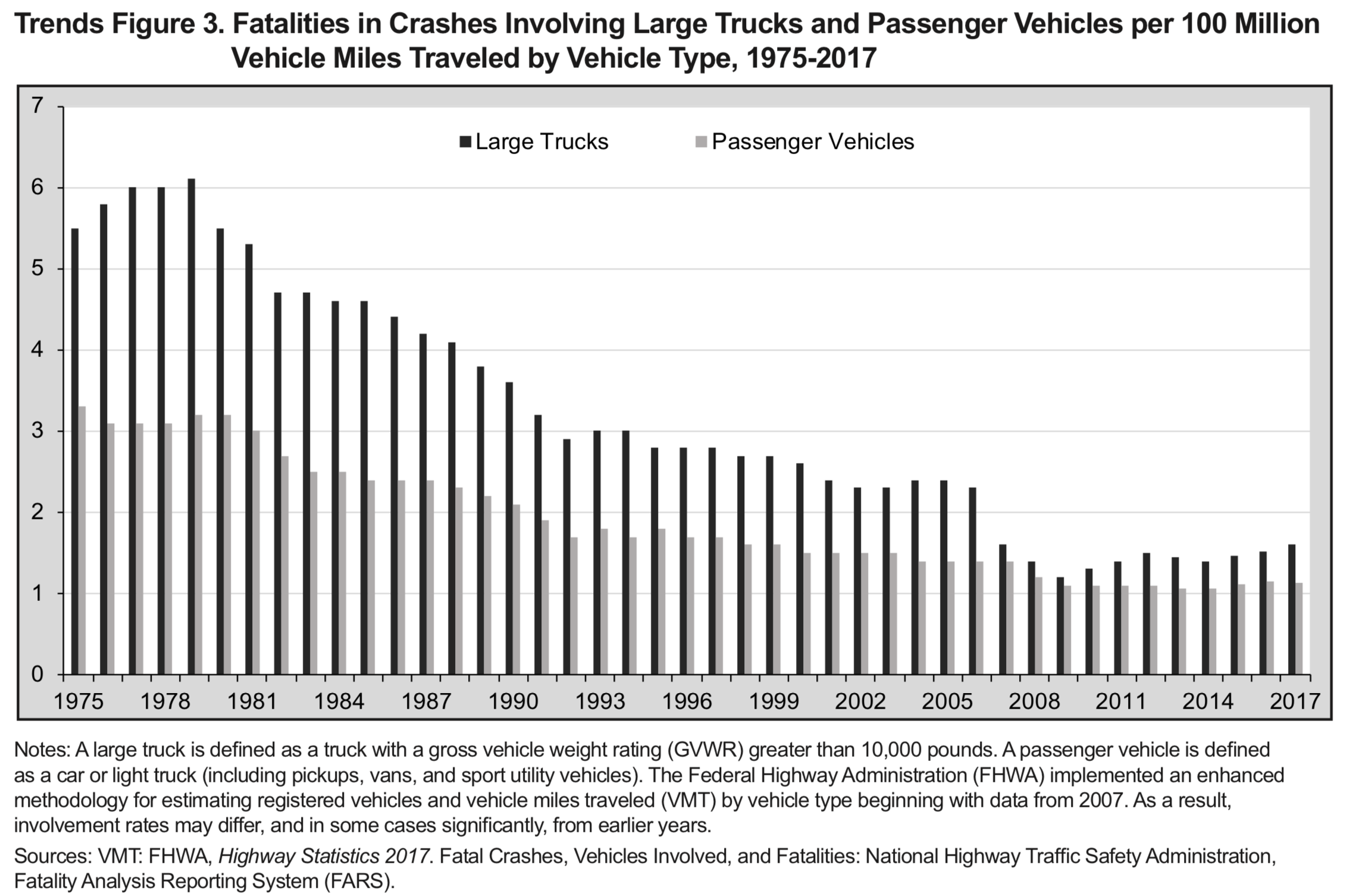 In Illinois, 979 fatalities and injuries occurred in crashes involving large trucks in 2017, an increase from 956 in 2013, according to a report by the Illinois Department of Transportation.

“Inadequate insurance minimum skews competition within the industry,” wrote Ted Miller in a 2013 paper, who is a senior research scientist at the Pacific Institute for Research and Evaluation. “Larger companies that actually have assets…have an incentive to protect themselves with greater insurance…smaller companies that have fewer assets and ‘nothing to lose’ purchase the minimum amount of coverage knowing they will simply have to go out of business for a while if they have a bad crash.”

At the press conference, Harry Alder, executive director of Truck Safety Coalition, said increasing the minimum insurance levels will “ensure those insurers do their job and look into [the safety of trucking] companies.” He added that Garcia’s bill would discourage insurance companies from writing policies to trucking companies with unsafe records and therefore prevent unsafe trucks from operating and endangering people on the road.

“Raising the number to $4.9 million will be devastating to the economy…to the whole, competitive marketplace as far as trucking is concerned,” said David Owen, executive director of the National Association of Small Trucking Companies, an advocacy group funded by small trucking companies.

In addition to the insurance proposal, Garcia co-sponsored the Safe Roads Act with Democratic Rep. Bonnie Watson Coleman of New Jersey, introduced by Democratic Rep. Hank Johnson of Georgia, in order to ensure the installation of automatic emergency braking for all new commercial trucks.

“The simple installation of automatic braking systems might have prevented deaths across the country,” said Johnson, “taking full advantage of technologies that are available and proven to anticipate and prevent crashes will save lives.”

Johnson said it takes approximately $500 to install an automatic braking system on a vehicle.

A cost analysis by the National Highway Traffic Safety Administration found that “the system cost varies significantly depending on the type and number of sensors used.”

According to a 2017 study by the AAA Foundation for Traffic Safety, the cost of the automatic emergency braking system varies between $500 and $3,000, including hardware purchase, installation, financing, maintenance, replacement and training for drivers and managers.

The bill also would define minimum performance standards of an automatic braking system, setting a standard for the automobile industry and informing the public what exactly the technology is going to do, Alder said.

Fourteen years after his crash, Graham Brown is married and works as a network administrator in an IT company.

“The new bills give me a lot of hope,” his mother said, wearing a badge with a photo of her and Graham on her chest. “I believe it will improve everyone’s life that’s involved in a horrific accident caused by a negligent trucking company.”

Article and video published in conjunction with