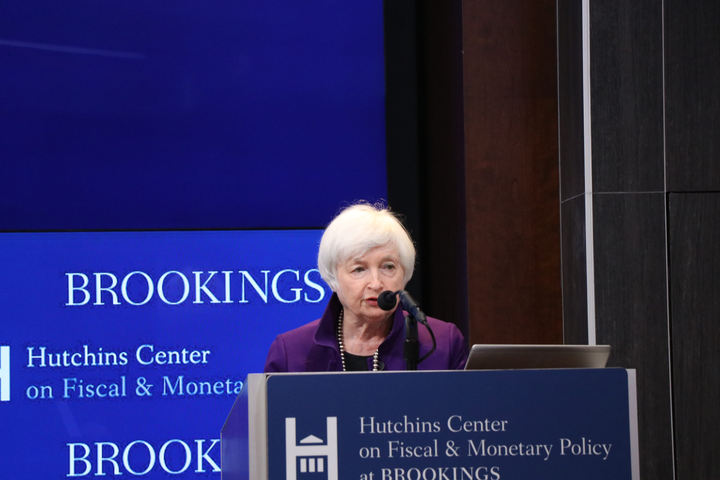 Janet Yellen, former Federal Reserve Board Chair, gave a speech on the panel entitled "What's (not) up with inflation?" Thursday at the Brookings Institution. (Bing Xiao/MNS)

WASHINGTON – Low inflation rates are concerning economic experts because they fear the economy will stall, and there is not an easy fix for the issue.

Since the Great Recession of 2007 to 2009, inflation in developed countries has been low and steady, which is not what economists expected. The Federal Reserve’s target for inflation is a 2% annual rate, which is a reasonable figure to meet the price stability objective. But in August , personal consumption expenditures inflation, a measure used to gauge inflation, was only 1.4% despite strong economic growth and low unemployment.

“We understand the economy a lot less well than we thought we did, which has a huge bearing on policy,” Nobel Prize-winning economist Paul Krugman said Thursday at the Brookings Institution event analyzing the economy.

Low inflation rates are a threat because they don’t it cannot stimulate consumer purchasing, which hurts prosperity of producer market and general economic growth.

However, inflation rising too high also poses a threat. Prices will rise, hurting consumers and savers. Central banks will raise interest rates to combat inflation, but this will make it harder for people to get and pay loans.

But Ben Bernanke, former chairman of the Federal Reserve, said that fiscal policy could be used to augment monetary policy to boost the economy in the case of a recession.