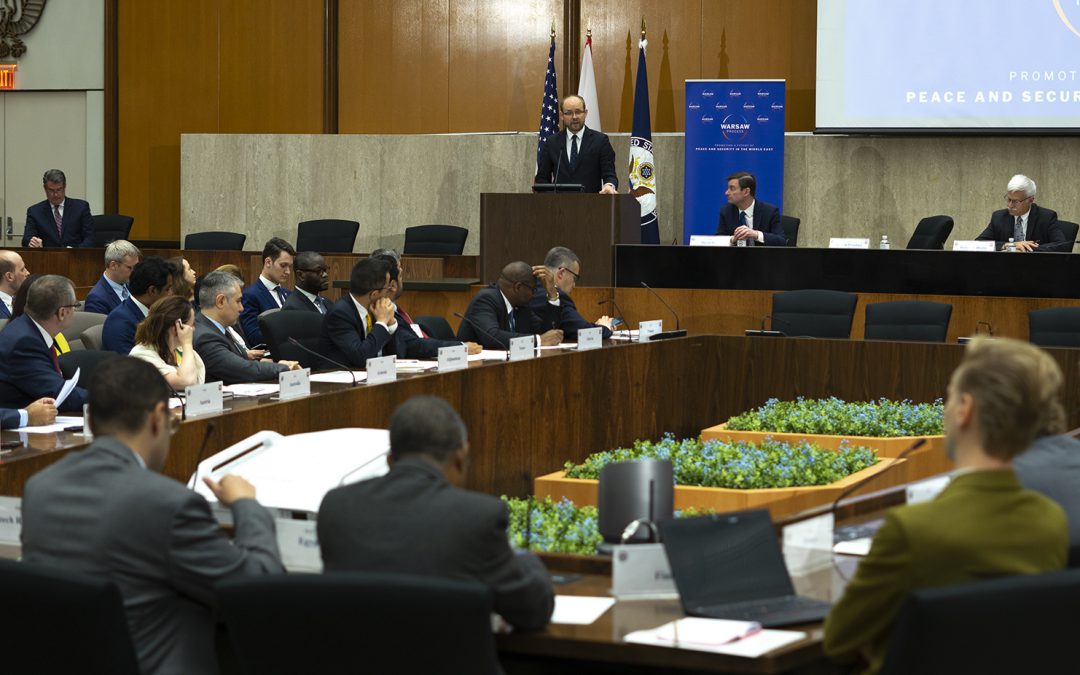 The U.S. and Poland hosted nearly fifty nations at the State Department on Thursday for a working group on promoting peace and security in the Middle East. The theme of the two-day discussion is security for women (Joe Snell / MNS).

WASHINGTON — Peace and security for women in the Middle East is now a central focus of U.S. foreign policy as a means to creating a durable region for the future and bolstering U.S. national security, a senior State Department official said Thursday.

“Societies where women participate fully in civic and economic life are more prosperous and peaceful,” said Undersecretary of State for Political Affairs David Hale. “Simply put, women deserve a seat at the table where decisions are being made about their lives and futures.”

Hale’s remarks came at a meeting with nearly 50 partner nations on Thursday and echoed the U.S. National Strategy on Women, Peace and Security, released by President Donald Trump in June. In 2017, Congress passed legislation requiring the creation of a strategy.

“Only through dialogue can further escalations and tensions be avoided,” said Marcin Przydacz, Under Secretary of State for Eastern Policy, Economic Diplomacy and Development Cooperation at the Ministry of Foreign Affairs of Poland.

In February, over 60 nations gathered in Warsaw to discuss instability in the Middle East. That meeting resulted in the formation of the Warsaw Process, a joint U.S. and Poland effort to advance shared Middle East interests and promote regional cooperation. Over 80 countries have been invited to participate.

“The conversation is far broader than any one country or issue,” said Secretary of State Michael Pompeo at the UN Security Council in August. “There’s no shortage of long-standing problems, but what the world needs is new and creative solutions.”

Women In International Security, which promotes female leadership and professional development, call the UN Security Council’s resolution on Women, Peace and Security “ground-breaking” in a policy brief released in March, but said challenges to full implementation remain, particularly in countries not involved in the working groups.

“We first ask where are the women in the peace processes in Yemen, Syria and Afghanistan,” said a WIIS representative in an email statement. “We do appreciate the general declaration of support, and we look forward to practical proposals, resources and funding, which will strengthen women’s political and economic participation in the region.”

Between 2005 and 2015, the number of displaced Middle East migrants grew from 5 million to about 23 million, according to the Pew Research Center. Conflicts in Iraq, Yemen, Libya and Syria alone are estimated to have affected more than 47 million people.

Recent conflicts in the region, Hale said, are particularly affecting women including the targeting of women journalists and politicians in Iraq, the assassination of female human rights defenders in Libya and mass displacement of families in Yemen.

Since the start of the Yemen crisis in 2015, gender-based violence there has risen 60 percent, Hale said.

“We must not simply view women as victims,” he said. “They must be considered as part of the solution.”

Thursday’s meeting at the State Department is the second of seven Warsaw Process meetings. It was the first international meeting of its size concerning the Middle East, Przydacz said, since the Madrid conferences in 1991 and 1996.

“This proves there is a wide consensus in the international society as to the need to address new, important problems related to aspects of security in the Middle East,” Przydacz said, and stressed the problems are common to the whole region.

South Korea held the first working group earlier this week on cybersecurity. Later this month, the Kingdom of Bahrain will host a discussion on maritime and aviation security.

The human rights working group continues Friday when Ivanka Trump will sit down with Brian Hook, a senior advisor to Pompeo.