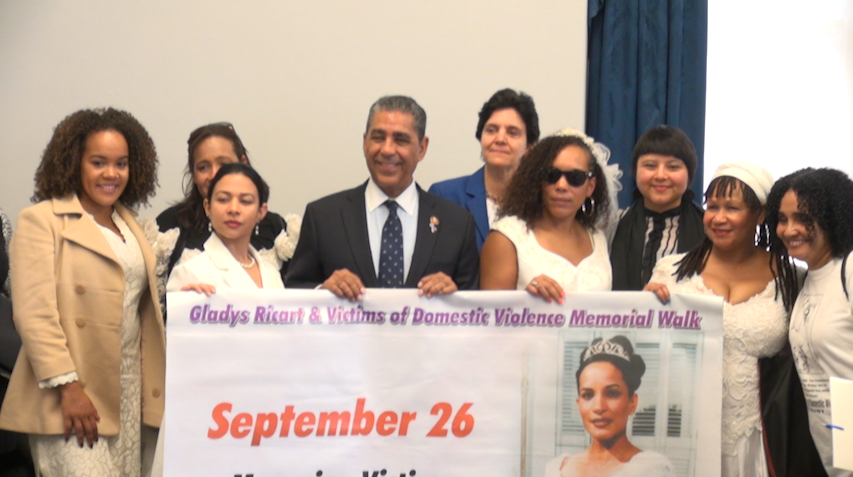 The 19th annual “Brides March” vigil and news conference coincides with Domestic Violence Awareness Month and is held within a month of the anniversary of the murder of Gladys Ricart, whose killing sparked the first March. Ricart, a young Dominican woman from New York city, was murdered in 2001 by her ex-boyfriend on her wedding day in front of her family and fiancé.

Democratic Rep. Adriano Espaillat has marched every year in honor of Ricart, who he represented in Congress. He said Tuesday that the Senate needs to vote to reauthorize the Violence Against Women Act, which expired earlier this year. The House has approved the measure. The law, originally passed in 1994, strengthened the ability to prosecute violent crimes against women, provided enhanced sentencing for repeat offenders and included restitution for victims of certain crimes.

Several lawmakers and activists suggested marching to Kentucky to get the attention of Senate Majority Leader Mitch McConnell.

“Activism moves stagnation,” said Josie Ashton, a Dominican from Florida who organized the inaugural Brides March in 2001, when she marched from New York to Florida in a bridal gown to bring awareness to victims of domestic violence. Since then, marches have been held each year in cities such as New York, Washington and Miami.

According to the Centers for Disease Control and Prevention, one in four women and one in seven men experience severe physical or sexual violence from an intimate partner.