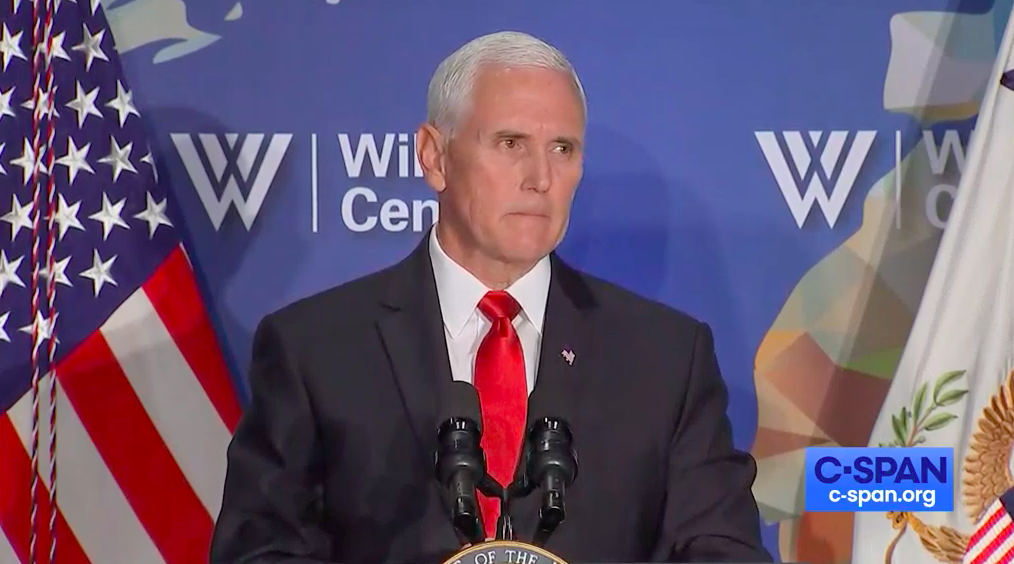 Vice President Michael Pence delivered a speech on Thursday about the future of the relationship between the U.S. and China hosted by the Wilson Center. (C-SPAN)

WASHINGTON –Vice President Michael Pence Thursday criticized China for not taking enough steps to improve the trade and economic relationships between the two countries, despite some progress on a preliminary deal.

In a speech at the Wilson Center, Pence said the U.S. seeks engagement with China through an open market and fair trade. The two countries are expected to complete a preliminary trade deal next month. The U.S. agreed to delay tariffs on Chinese goods, and China agreed to buy $40 to $50 billion worth of American agricultural products annually under the deal.

“President (Donald) Trump believes that China wants to make a deal,” the vice president said.
“He remains optimistic not only we can complete phase one but we can move on.”

However, he criticized China for not doing enough to improve the economic relationship. Last year, he gave a stinging speech harshly criticizing China’s leaders. He made the U.S.’s stance clear that “this president will not back down. The American people will not be swayed. And we will continue to stand strong for our security and our economy.”

Since that speech, “Beijing has still not taken significant action to improve our economic relationship. And on many other issues we’ve raised, Beijing’s behavior has become even more aggressive and destabilizing,” Pence said.

In that year, he said, “America has added trillions of dollars of wealth to our economy while China’s economy continues to fall behind.”

He said some corporations see the U.S. economic policies as “too tough” and impediments in their efforts to operate in China.

“We see it very differently,” he said. “Despite the great power competition that is underway, and America’s growing strength, we want better for China.”