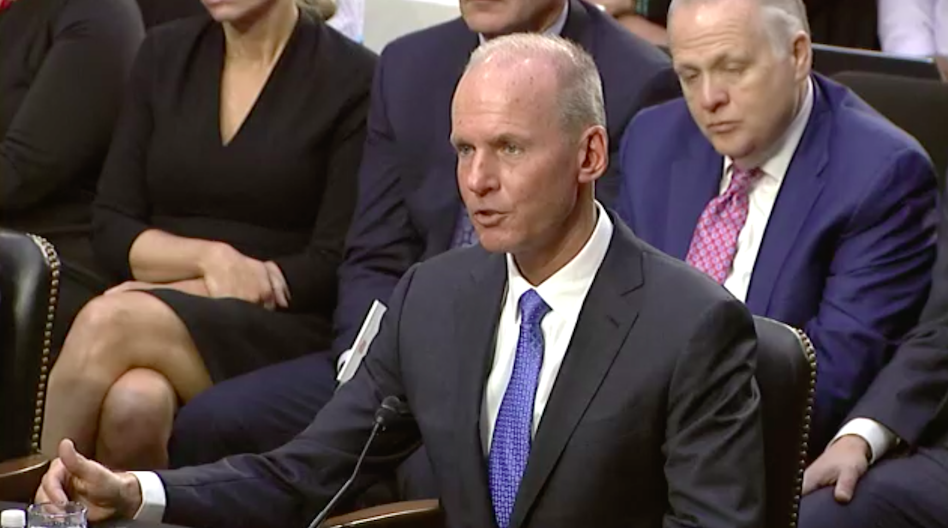 WASHINGTON — Boeing’s chief executive admitted to Congress on Tuesday that the aircraft manufacturer made some mistakes in the design of its Max 737, resulting in two crashes last year that killed 346 people and the grounding of the troubled aircraft.

CEO Dennis Muilenburg testified before the Senate Commerce Committee on the anniversary of the crash of Lion Air flight 610, which went down in the Java Sea shortly after takeoff from Jakarta, Indonesia, killing all 189 people on board. In March, after another 737 Max crashed in Ethiopia killing all 157 passengers, the plane was grounded worldwide. Investigators have linked the accidents to a flawed safety system, known as MCAS.

Throughout the hearing, angry senators pressed Muilenburg on how Boeing allowed the faulty design to move forward.

“We know we made mistakes and got some things wrong,” Muilenburg told the committee in his opening statement. “We own that. We understand and deserve this scrutiny.”

Boeing faces investigations by the Senate Commerce Committee and the House Transportation Committee as well as a criminal probe by the Justice Department.

Muilenburg said he believes the plane will be re-approved for commercial flight in the “next weeks and months” as the revamping work is “in the final stages.”

He admitted that he was made aware of internal email messages that raised concerns about the safety of Boeing 737 Max after the first crash and five months prior to the second one. However, he did not explicitly justify why the messages were not disclosed until recently.

“We cannot have a race for commercial airplanes become a race to the bottom when it comes to safety,” Washington Sen. Maria Cantwell, the top Democrat on the committee, said.

Internal documents show that regulators gave Boeing permission to remove mention of the MCAS system from the MAX manual. Muilenburg explained that “more information in the manuals is not necessarily safer” and that manuals are meant to help pilots respond to malfunctions rather than diagnose which system is flawed.

Lawmakers also expressed concern about “the level of coziness” between the Federal Aviation Administration and Boeing.

Some of the victims’ families were present at the hearing holding posters of their deceased loved ones.

Ahead of the hearing Muilenburg told reporters that “he hasn’t been involved in discussions” about his possible resignation and that his focus is “on the job at hand.” The company’s board stripped him of his title of chairman of the board on Oct. 11.