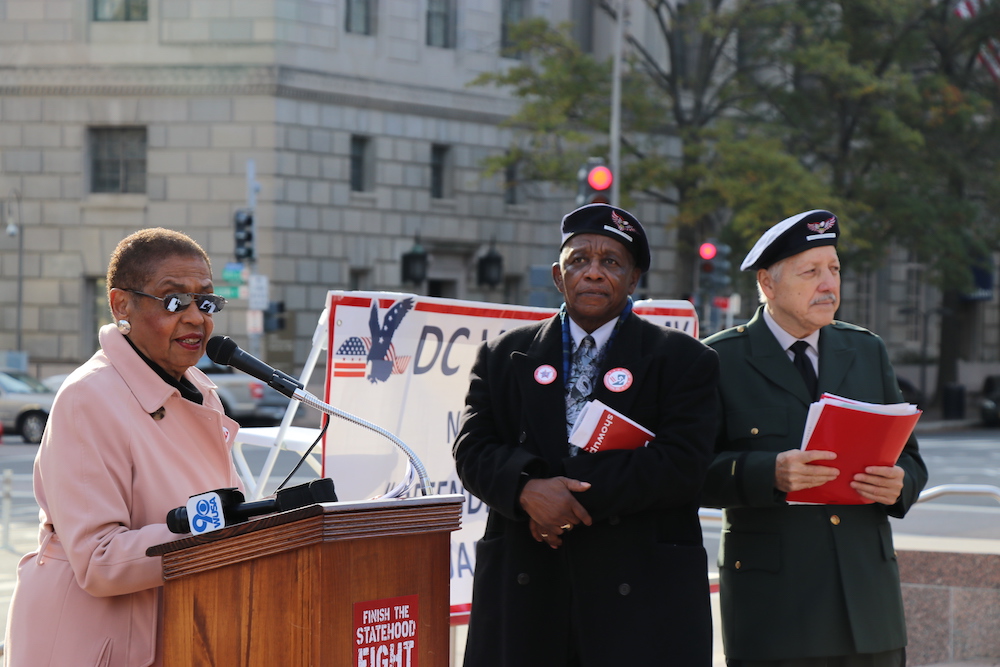 WASHINGTON — The 30,000 veterans who live in Washington deserve the political rights that would come with statehood for the District of Columbia, activists said at a Veterans Day rally on Monday advocating to make the nation’s capital the 51st state.

The rally organized by Veterans United for D.C. Statehood was part of an ongoing effort, which gained momentum after a congressional hearing on the issue was held in September, the first in 25 years.

The lack of political rights for the veterans living in D.C. is “wrong” and “dishonoring” of their service, said Paul Strauss, one of D.C.’s two shadow senators, who are elected but have no right to vote in the Senate.

“In a democracy, everybody must have a voice,” he said.

At the rally, Rep. Eleanor Holms Norton, the non-voting delegate who has represented the District for nearly 30 years, thanked the city’s veterans for their service and said they are “unique because they are the only members of the armed forces who served without having their full rights.”

Norton has been a leading voice in the push for statehood, introducing the legislation that would make D.C. the 51st state last January. The bill proposes to separate the U.S. Capitol and the National Mall as a federal enclave from the rest of the city, which would become a state.

With its 700,000 residents and income higher than that of any other U.S. state, the District should be given statehood, Norton said.

“We fought for this country, and we want America to tear down this wall of infamy that is keeping us from voting in the Congress of the United States,” said Hector Rodriguez, a former Army captain and chairman of Veterans United for DC Statehood. “We have a right to seek redress from the government that sends us to war.”

Ingrid Drake, a 20-year city resident, attended the rally with her two kids.

“I want my children to not grow up here and not have a vote when they are 18,” she said. “I have never been able to vote on any of the wars that the Congress has voted on. I have never voted in midterms. We feel very cut out of the process.”

The statehood legislation has 223 co-sponsors in the House. Its companion bill in the Senate, which was introduced by Sen. Tom Carper, D-Del., has 35 co-sponsors.

House Speaker Nancy Pelosi, D-Calif., and House Majority Leader Steny H. Hoyer, D-Md., have voiced their support for the legislation. In the wake of the Washington Nationals World Series win, former Secretary of State Hillary Clinton also called for D.C. to be given statehood.