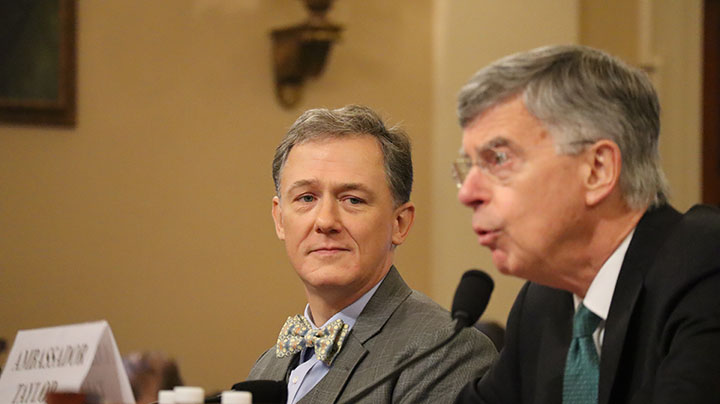 The remarks came during the first day of open House impeachment proceedings. Taylor has become a key figure in the investigation after his closed-door testimony revealed he had learned of a concerted effort by the Trump administration, through unofficial channels, to pressure the Ukrainian government to open an investigation into Democrats and the Biden family centering on Hunter Biden’s membership on the board of Burisma, a natural gas company, and 2016 election interference.

“The president wanted to hear from Zelensky before scheduling the meeting in the Oval office” that Zelensky wanted, Taylor said in his opening remarks. “It was not clear to me what this meant.”

He described an “irregular, informal channel” between Giuliani, Energy Secretary Rick Perry, White House chief of staff Mick Mulvaney and others to communicate with Russian and Ukrainian officials. Taylor claimed he’d been a part of both official and unofficial channels since he was included in certain conversations.

US Ambassador to the European Union Gordon Sondland, who also was part of the channel, made headlines last week for reversing his private testimony to say that he, in fact, told a top Ukrainian official that the military aid promised to the country was contingent upon a public announcement of an investigation.

Taylor said it was apparent by July that the meeting Zelensky wanted with the White House was conditioned upon investigation into Burisma.

Taylor testified along with George Kent, a top State Department official who oversees European and Eurasian Affairs. While Kent, like Taylor, was not on the call between Trump and Zelensky that started the impeachment inquiry, he was in direct communication with the unofficial group of Trump allies that Taylor referred to.

During his testimony, Kent explained said he had told then-Vice President Joe Biden’s office that he believed Hunter Biden’s involvement with Burisma would give the appearance of a conflict of interest because the company was under scrutiny for alleged bribery.

Kent also revealed how, over the last year, he became aware of attempts by Giuliani to smear and push out Marie Yavonovitch, the former U.S. ambassador to Ukraine.

Giuliani had apparently been working with associates like Igor Fruman and Lev Parnas, who were arrested earlier this month, to concoct investigations into the president’s political rivals and oust officials deemed inconvenient like Yavonovitch, Kent said.

“It became clear to me,” Kent said. “Guliani’s efforts to gin up politically motivated investigations were now infecting U.S engagement with Ukraine.”

It is unclear how long the hearings will last before a formal vote to impeach in the House. Yavonovitch is expected to publicly testify on Friday and Sondland sometime next week.