Into the spin cycle 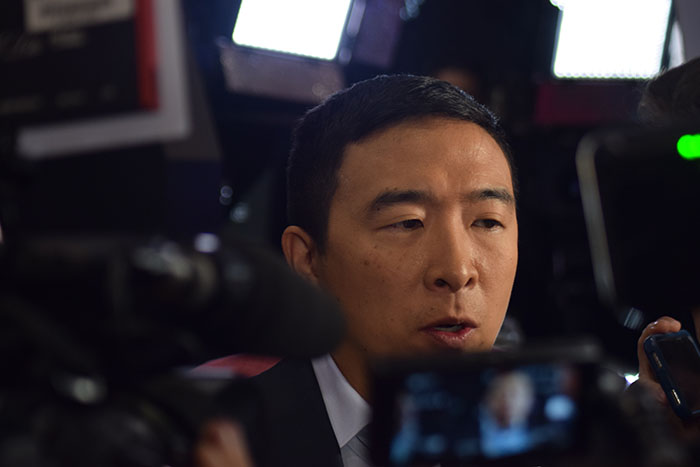 Andrew Yang speaks to reporters in the spin room after the fourth Democratic presidential debate in Westerville, Ohio on October 15, 2019 (Sam Cabral / MNS)

WASHINGTON – When the fifth Democratic debate ends Wednesday night, most viewers likely will head to bed, but most of the candidates will have no such luck.

After two hours of questioning in front of the television cameras and under the spotlights, the majority of these presidential hopefuls will step off the stage and into the spin room, where they tout what they consider their successes, push back against criticism of their performances and sell themselves as the real winners of the night.

The spin room has been a post-debate tradition since 1984, when campaign aides to President Ronald Reagan spilled out into a sea of reporters at the Hyatt Regency Hotel in Washington after a bruising encounter with Democratic opponent Walter Mondale. In an orchestrated effort to influence the next morning’s headlines, the operatives countered notions of a victory by underdog Mondale by effusively and repeatedly stating that their candidate was “clearly in command of the facts” and “still the champ.” They were dubbed the “spin patrol.” 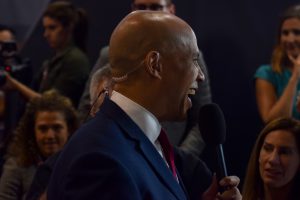 “They cared about the front page of The New York Times and how that paper was going to interpret the debate,” said Ryan Lizza, chief Washington correspondent for Politico, emphasizing the 1984 Reagan operation’s focus on print media.

The modern spin room has evolved beyond the daily reporters in print and broadcast to include longer-form coverage and social media reporting. Olivia Nuzzi, Washington correspondent for New York Magazine, described it as a National Geographic documentary where “everyone swarms one way and then swarms the other way.”

At October’s debate in Ohio, a 10-year-old reporter spoke to every candidate in the spin room. Nuzzi tweeted wryly: “I could do without the child reporters and their stage parents at presidential debates.”

Creatures of the old and new media worlds swarm the candidates as they emerge from the wings, often accompanied by a bevy of staffers and surrogates, supporters who amplify their messages. 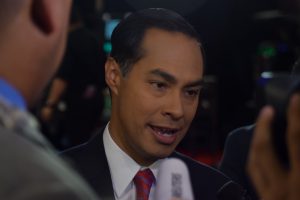 Conant has an army of reporters scattered around the country in this election cycle, but she has also been on the other side. In 2016, she handled regional communications for Florida Sen. Marco Rubio’s presidential bid.

The Democratic primary contest began with over 20 candidates, forcing the Democratic National Committee to announce qualification criteria for each debate. With only 75 days to go before the first-in-the-nation Iowa caucuses, the DNC thresholds on fundraising and polling have largely failed to cull the field. Wednesday’s debate in Atlanta will feature 10 candidates, with only former Housing and Urban Development secretary Julian Castro failing to make the cut since last month’s debate.

With four candidates emerging at the head of the pack in national and early primary states polling, the spin room provides lower-tier candidates with the face time and visibility they rarely get during a rigidly structured television debate. 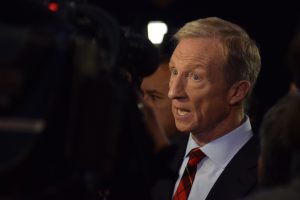 Candidates like Andrew Yang spend lots of time in the spin room and bring a “complete outsider’s perspective” to such rituals, said Lizza. He noted that Yang was the last man standing in the spin room after the third Democratic debate in Houston two months ago.

“He was there until midnight because I was there at the end, talking with him. The lights were about to be shut off. He was still there talking to people.”

“People like that bring a much more nonpolitical perspective to it and they see everything with fresh eyes,” said Lizza, who has covered every presidential election since the year 2000. “They see a lot of the silliness that long-time politicians take for granted.”

Brian J Karem, White House correspondent for Playboy, has been in every spin room since 1984. He said campaigns navigate the spin room by spouting stump speeches and getting the message out onto as many platforms as possible so the trick is to pull them out of their comfort zone with hard-hitting questions.

For Karem, who has tangled with the Trump administration over press credentials, that means being the loudest guy and getting his questions out.

“This is a lot like the South Lawn of the White House, except there’s 12 Trumps running around and unlimited space.”