Protesters rally for an end to solar tariffs 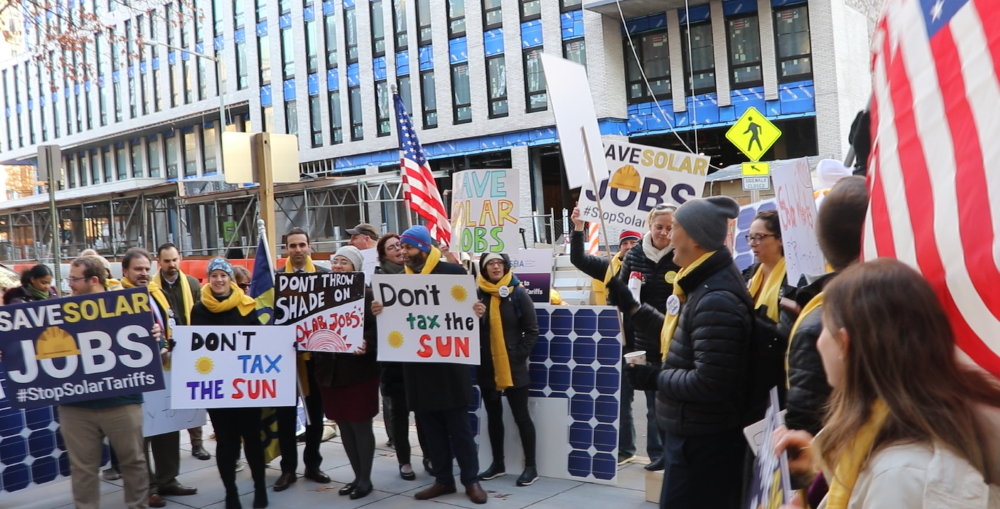 WASHINGTON – Before the U.S. International Commission reviewed tariffs on solar equipment during a hearing Thursday, outside the building opponents of the tariffs chanted, “No more tariffs on the sun, solar jobs for everyone.”

The rally was organized by Solar Energy Industries Association), the national trade association for the U.S. solar energy industry. Opponents of the solar tariffs say that they have hurt the U.S. solar industry, the economy, efforts to combat climate change and cost American jobs.

In January 2018, President Donald Trump enacted the tariffs on solar equipment. “We’re going to benefit our consumers, and we’re going to create a lot of jobs.” he said.

“I think the tariffs are very unfair. They pretty much cover everything and people don’t realize that small components that we import help out industries and we’re not the only industry that gets affected by that,” Solar Energy Industries Association intern Tantara Person said at the rally. “Tariffs are kind of a blunt axe, rather than a surgeon’s tool, and it’s just not very effective.

A report released by the SEIA on Tuesday stated that 62,000 U.S. jobs were lost, $19 billion in new private sector investment was forgone due to the tariffs, and the impact to emissions was equivalent to adding seven coal power plants. The report also said that the tariffs cost the U.S. economy “$10.5 million per day in unrealized economic activity.” However, the White House criticized the results of the study.

According to Henry Kelly, a senior fellow at the Boston University Institute for Sustainable Energy, the tariffs have hurt the solar industry by making the cost of solar arrays more expensive. Kelly said in a telephone interview that since the solar industry is an internationally connected production chain, “disrupting it is invariably going to create problems.”

Kelly said that a strong international market for solar equipment is necessary, as countries throughout the world need access to affordable renewable energy sources.