Thousands rally for Donald Trump in Pennsylvania amid impeachment 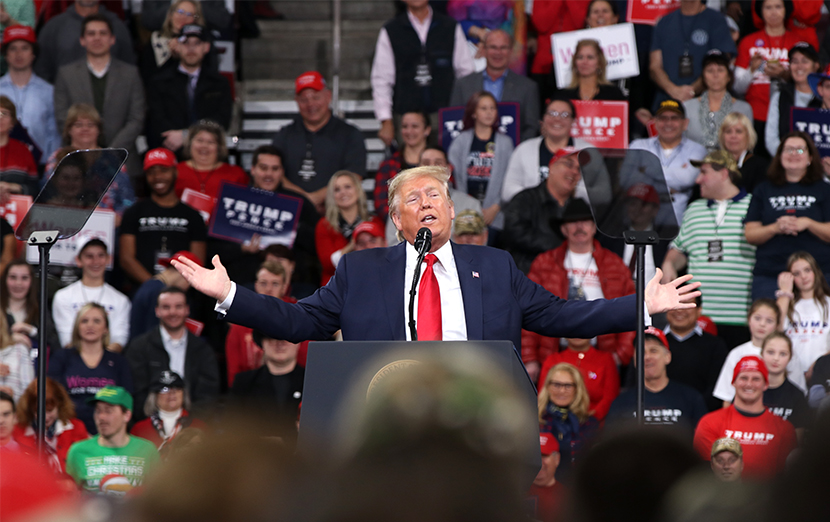 HERSHEY, Pa. — President Donald Trump and his supporters downplayed the possibility of impeachment at a campaign rally hours after House Democrats formally accused the president of abuse of office.

“This is impeachment light. This is the lightest, weakest impeachment in the history of our country by far,” Trump told a crowd of over 10,000 at the Giant Center in Hershey, Pa., Tuesday night.

Trump attacked House Democrats, the media, Democratic presidential candidates Elizabeth Warren and Pete Buttigieg and others during his nearly two-hour speech in the battleground state.

The president also lashed out at Democrats’ approval of the USMCA today, a free trade agreement among the United States, Canada and Mexico that would replace its predecessor, NAFTA. He said House Speaker Nancy Pelosi approved the deal to hide Democrats’ embarrassment over the impeachment inquiry.

Supporters in the crowd were confident that Trump would win re-election in 2020.

“I’m here because I’m tired of presidents not doing what they promised,” he said. “The impeachment inquiry is a waste of time, and I’ll be voting for Trump in the next election.”

Others echoed the sentiment.

“Democrats hate the man, it’s totally personal,” said Kevin Andrew, 65, of Hagerstown, Md., who said he would vote for Trump next year. “The economy is strong, and he’s bringing us jobs and keeping his promises.”

Trump won Pennsylvania by 44,292 votes in 2016, turning the historically blue state red. He is looking to strengthen his hold on the state.

“Pennsylvania, we won so big in 2016, and the best is yet to come,” Trump said to roars from the crowd, clad in red hats emblazoned with the slogan of Trump’s re-election campaign, “Keep America Great.”

Pudlak said the impeachment inquiry is a “waste of time and money” and that Democrats in Washington have “had it out for him from the start.”

Trump will likely face an impeachment trial in the Senate next month, as House Democrats have vowed to push forward with their inquiry as quickly as possible. Trump is the fourth president to ever have articles of impeachment drafted against him.