A bright spot amid the Iowa chaos: People with disabilities get an accessible caucus location 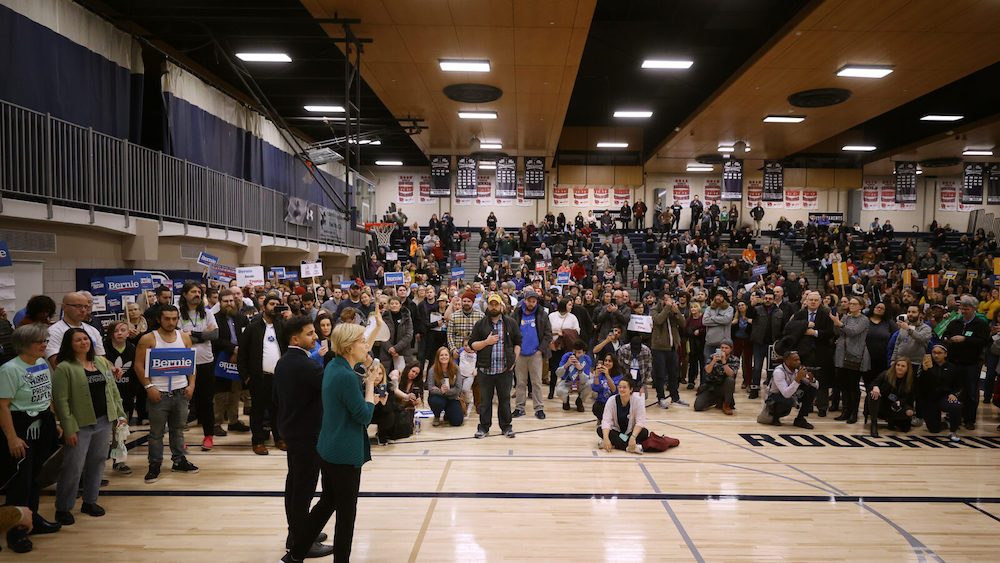 DES MOINES, Iowa — For a small handful of Iowans, simply participating in Monday’s caucuses was a momentous feat in itself.

For the first time this year, people with disabilities could take advantage of 87 new satellite caucus locations set up by the Iowa Democratic Party, aimed at making the complicated process of caucusing, which can involve standing to move across a room or up and down bleachers and stairs, that much easier. All of the locations offered the chance to participate outside of normal hours. And some provided language assistance and accessibility features like an elevator and gender neutral restrooms that might otherwise have been unavailable for those with disabilities.

For the people who were able to participate, the satellite locations offered a rare bright spot in the otherwise chaotic Monday caucuses. Thanks to technological glitches and widespread confusion about the voting process, the Iowa Democratic Party still had yet to announce any of its results by midday Tuesday.

“There’s lots of parking, I could get in the door, there was an elevator — there were accommodations made for my type of disability. If you are in a school auditorium and you want to change from one party to another, you can’t just get up with a walker and move around — it’s difficult,” said Carol Schroeder, 65, who has type 2 diabetes and who decided to change caucus locations after struggling to access her site for over 40 years.

Schroeder chose instead to use a satellite location run by the Central Iowa Center for Independent Living (CICIL), a nonprofit that encourages people with disabilities to integrate into their communities.

It’s not clear yet whether CICIL’s site was beset by the same technical difficulties as many other caucus locations in Iowa. Caucus chair Reyma McCoy McDeid said she assumed everything had gone smoothly when she didn’t hear otherwise. But as of Tuesday morning, McDeid was locked out of the app.

“I’ve gotten absolutely zero feedback from the party since submitting our numbers through the app,” she said.

A total of 67 Iowans caucused at the location, many for the first time. Located in the Fair Park shopping mall in north Des Moines, the caucus site provided child care services, a sensory deprivation room, gender neutral restrooms, free food, and an elevator.

“We think tonight is going to be not only great for the folks that caucus but also for the political process in Iowa. We are really wanting to center disabled people in conversations about politics in Iowa, so this is for us a great start,” said McDeid said Monday.

For Evan Schultz, 33, and Jennifer Capaldo, 48, who relies on a walker after a failed knee replacement surgery, the caucus allowed them to be active members of their community. Their previous locations were not ADA-compliant, which meant they could not access the building, Capaldo said.

Other caucus-goers said that the earlier timing made it possible for them to attend. In previous years, all caucusing began at 7 p.m.

“If not for the satellite, I wouldn’t be able to participate,” said Tania Kac, 51, who caucused for Sen. Elizabeth Warren and whose son has autism, effectively precluding her from participating at her typical caucus location. “It would be hard to bring him there from 7 p.m. to 9 p.m. This location starts earlier, and they’re more inclusive.”

In the same room as CICIL’s satellite caucus was another, separate vote, for the American Sign Language caucus. There, 18 deaf or hard-of-hearing Iowans gathered.

“It means so much to me to be a part of this caucus. As an American citizen, I can fully participate and have my civil rights be enacted. I’m really proud,” Vania Kassouf, who is deaf, said via a sign language interpreter.

At the end of the CICIL caucus, five delegates had been assigned to Warren and two to Sen. Bernie Sanders.