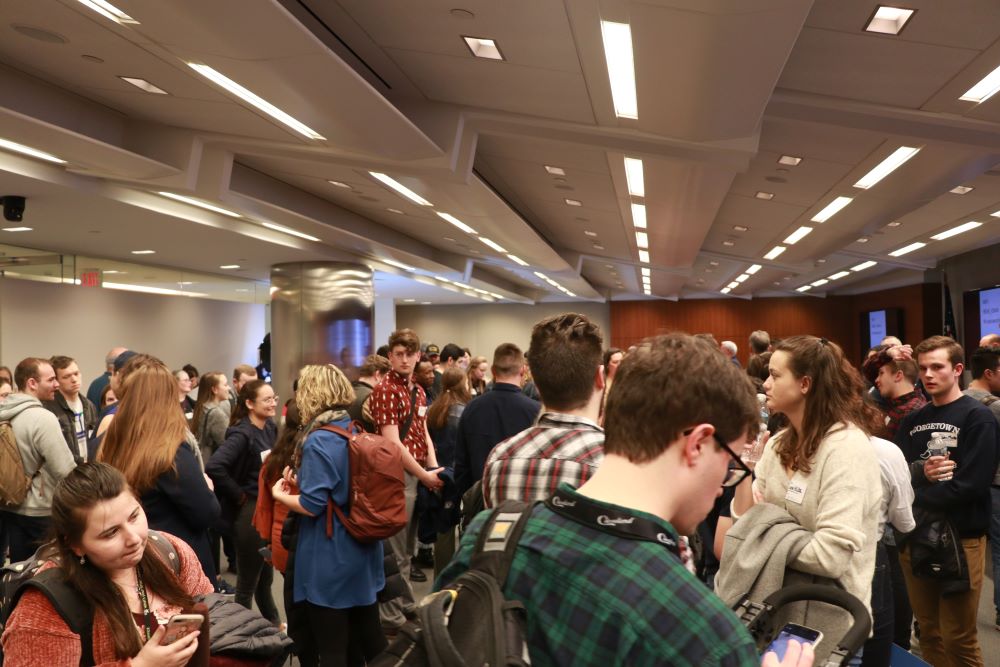 Satellite caucus-goers gather before the start of the Caucus in the International Brotherhood of Electrical Workers in D.C. (Brian Johnson/MNS)

Luke Theuma is originally from Des Moines and now works in Washington. He said Warren’s positions on climate change, a wealth tax, and ability to work with Republicans won his support. Theuma also said he thought Warren was a more inclusive candidate than Sanders, which made her more appealing. President Trump, Theuma says, will “demonize whoever his opponent is. Electability is out the window. … I think Warren engages with enough people that she will overcome that.”

The Iowa Democratic Party first tested satellite caucuses in the 2016 election in four locations within Iowa. It greatly expanded the program for the 2020 election—an initiative that seems to have gone more smoothly than the rollout of its vote-counting app. There were 87 satellite caucus locations for the 2020 election, with 60 of those locations being in Iowa, along with other locations throughout the US and a few international locations, including Scotland, the Republic of Georgia, and France. The goal of the satellite caucus locations was to make the Iowa caucuses more accessible to Iowa voters, wherever they may be.

And yet, DC’s first caucus was not free of confusion. Just how the delegates earned in the Washington satellite caucus (three for Warren, two each for Buttigieg and Biden, and one for Sanders) will translate into actual Iowa delegates is not entirely clear, said Cody Leistikow, the precinct secretary in Washington. “I believe they bring these (satellite caucuses) in as an extra county into the district,” Leistikow said. “So, it’s a weird procedure, and I don’t quite understand that.”

Even before the caucuses unfolded, one caucusgoer recognized that the caucus process could be confusing. “I think even among Americans, no one really understands what a caucus is,” said Brianne Todd, an international relations specialist in Washington. “If you come from a community or less than 1,000 people, getting everyone together at someone’s house, or school, or local community center, it makes sense.” Todd said she was undecided about who to support but liked US Senator Amy Klobuchar, who all but declared victory in Iowa Monday night before any official results had been announced.

Myles Young, a Georgetown Law student, caucused in 2016 to support Sanders and planned to do so again. After the first round first of the caucus, Sanders had not received the 15 percent of the votes to be determined viable, but his supporters were able to pry loose another voter to reach the required percentage, Leistikow said. Some caucus voters worried about the impact of more left-wing candidates, such as Sanders.

Lisa Bartusek and Eric Derr said decreasing polarization in America was their main issue, and both favored more moderates such as Buttigieg, Biden and Klobuchar. “Under Trump, the Republican party has moved so far to the right, and there is a movement among the Democratic Party to move to the left, and I just think that would destroy America,” Derr said. “America works best governed from the middle.”