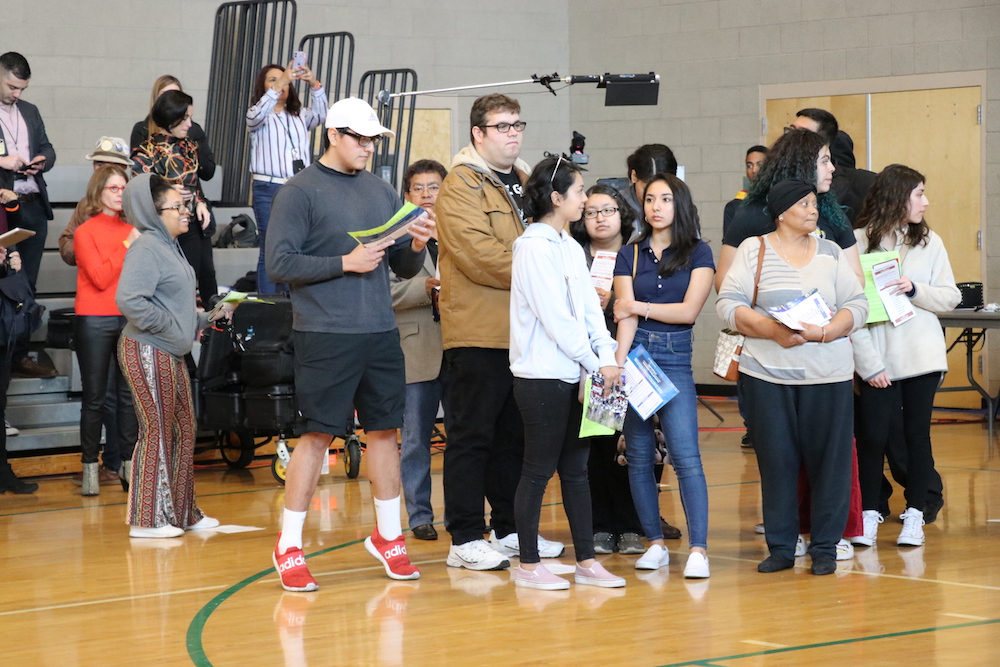 Nevada voters gather together at a caucus site in Las Vegas during the Nevada Caucuses. (Silvia Martelli / MSN)

LAS VEGAS — “I am here because my vote can make a difference,” Octavio Barrera Soto said in Spanish as he walked into a caucus venue in a predominantly Hispanic neighborhood on Saturday morning.

Barrera Soto migrated from Mexico to the U.S. in 1985. A native Spanish-speaker, he still significantly struggles with English. That is why he picked a caucus venue well equipped to ensure a smooth and effective voting process for Spanish-speakers: Three bilingual volunteers were available to translate.

Nevada is among the top five U.S. states where Latinos make up the largest percentage of the population – nearly one third of Nevada residents are Latinos, according to a 2018 Harvard study. Out of the 431,000 eligible to vote, 299,000 have registered, accounting for 27.9% of all Democratic voters in Nevada, the UCLA Latino Politics & Policy Initiative estimated recently.

“Let’s not forget that immigrants who are American citizens are so hungry to be part of [society], but don’t want to offend folks,” said David Giron, a translator at the venue. “So they may not ask questions, they may sheepishly just walk away, which is why we need to be here and make sure that they know they are welcome.”

Because the caucuses are much more complex than primaries, said Giron, it is even more crucial to ensure that the process is “correct and efficient,” which includes making translation available for people who don’t speak English.

The lack of translation means excluding people “whose lives and experiences are just as important and may in fact be disproportionately impacted by policies,” said Jennifer Allen Aroz, senior vice president of community and civic engagement at the League of Conservation Voters.

In the wake of this increasing awareness, over the past months the Democratic National Committee and various organizations across the state made unprecedented efforts to mobilize Latinos and ensure that even those who do not speak English would vote.
“Participating in the caucus is even more difficult for Spanish-speaking people because it requires a higher level of commitment,” explained José Parra, CEO of Prospero Latino and Latino communications advisor for President Obama’s 2012 reelection. “It’s basically a community meeting – you have to spend time at the venue and advocate for your favorite candidate.”

In September, Nevada’s state Democratic Party kicked off caucus training for Spanish speakers. Similarly, Chispa, a League of Conservation Voters program that focuses on the Latino community, organized two training sessions in Spanish prior to the caucuses.

Twenty people attended the first mock caucuses – which were held in January – and voted for either salsa, bachata or reggaeton instead of for candidates. Turnout for the second session doubled, and voters advocated for the best types of Doritos whilst figuring out how the voting process worked.

“We were only planning to do one mock-caucus, but those who showed up said that they thought others would really benefit from this,” said Carolina Chacon, a member of Chispa. “[At the next training] they brought their mom, their friend […] to make sure that they also understood the process.”

Training more people to participate in the caucuses is a critical part of mobilizing voters ahead of the general election.

“Making sure that our democracy functions means that folks need to be engaged in sort of elections in the big sense, not just around Election Day or the week leading up to it,” said Allen Aroz. Over the past months, she has been working to engage Latino families across the state as well as the rest of the country.

In an attempt to increase turnout, the state held four days of early voting, both in Spanish and English.

But for Mario Vidales, another caucus goer who migrated from Texas over twenty years ago, presidential candidates still have to go a long way to ensure better engagement among Latinos.

“We need more ads in Spanish because a lot of Latinos do not understand those in English. We need more information,” he said.

By not reaching Latinos enough, candidates “are losing power and votes,” Vidales said.

Research shows that better and larger access to Spanish-language material on candidates and the voting process will increase voter participation among Latinos, Rodriguez said.

The language barrier does not only tune off some Latino voters, it can also result in them voting for candidates without fully understanding their policy plans, Vidales said.

“They just vote for whoever they have seen more often,” he said.