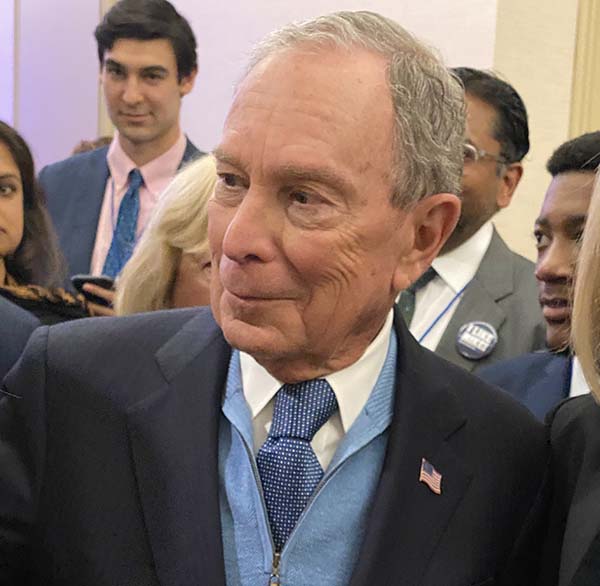 CHARLOTTE– After spending millions of dollars on his presidential campaign, Michael Bloomberg, the multi-billionaire former New York mayor, dropped out of the presidential race Wednesday after he failed to win a single primary. Bloomberg has now endorsed Joe Biden who saw a massive win in Super Tuesday states.

One reason for Bloomberg’s departure from the race was his lack of support from black voters, despite receiving high-level endorsements from African American mayors in North Carolina and other states.

Multiple Bloomberg signs lined both sides of the road to the polling station in the mostly African American Derita Statesville neighborhood, but inside, hardly any voters cast their ballot for the former New York mayor.

Bloomberg appeared on the ballot for the first time on Super Tuesday and despite spending about $12.8 million dollars on advertising in North Carolina, he received just 13% of the vote to finish third behind Joe Biden and Bernie Sanders, who combined spent less money here than Bloomberg.

“On my way to work, there are 35 Bloomberg signs, five inches apart. You can’t miss them,” said Steve Mowery, a Sanders supporter. “I did not vote for Bloomberg specifically because he’s another Trump,” Mowery added.

Bloomberg accompanied his spending with many key North Carolina endorsements, including one from Charlotte Mayor Vi Lyles. That didn’t sway many voters, the results show, and angered Lyles’ daughter, Aisha Alexander.

“I have no words to describe how devastatingly disappointed I am in every Democratic mayor who has endorsed Michael Bloomberg, particularly the black ones, and especially the ones closest to me,” Alexander tweeted.

“It really breaks my heart,” said Tina Marshall, a voter in the area. “She brought the RNC here. And then, she essentially endorsed another Republican as far as I’m concerned.”

Charlotte will host the Republican National Convention this summer. Eight years ago, it was host to the Democratic convention that renominated President Barack Obama to a second term.

Marshall said she lived in New York through the “Stop and Frisk” policy of then-Mayor Bloomberg. “Stop and Frisk” allowed the New York Police Department to temporarily detain, question or search anyone. The NYCLU reported that between 2002 to 2011, an overwhelming majority of those detained were black or Latinx.

The policy has been dubbed racist and largely ineffective.

“They just treated people of color and black people terribly, terribly,” Marshall said. “I think he’s the same as Trump. Except, I think he’s far more authoritarian and he’s far smarter than Trump which makes him far more dangerous,” she said.

Bloomberg apologized for the discriminatory policy right before launching his presidential bid and then again in February.

“Trust is very important so I was a little torn with Bloomberg,” said Jacquelyn Singleton, another voter in Derita Statesville.

Singleton said that while she believes that his apology was “truthful”, “sincere”, and “valid”, she wouldn’t vote for him.

“When you’re speaking on our behalf accidents just can’t happen…we all make mistakes, but I have children, and one slight error verbally, can cause us a lot of challenges,” Singleton said

The most important issue for Democratic voters I spoke to in Charlotte was to “get Trump out of the White House” but some said they would have to reconsider if Bloomberg got the nomination.

James Mungo, a former Amy Klobuchar supporter in the Cotswold neighborhood, was torn between Biden and Sanders before going in to vote but said he would vote for whoever was the Democratic nominee. There was only one candidate that would make him reconsider. “I couldn’t do it, if it were Mike Bloomberg,” Mungo said.

Biden won North Carolina with 43% of the vote. He was followed by Sanders at 24%, Bloomberg at 13% and Massachusetts Sen. Elizabeth Warren at 10.5%.

A range of issues were on the minds of voters who at polling stations in Charlotte. The top priority was health care, affordable housing and economy which were followed by an emphasis on gun control, climate change and justice reforms.