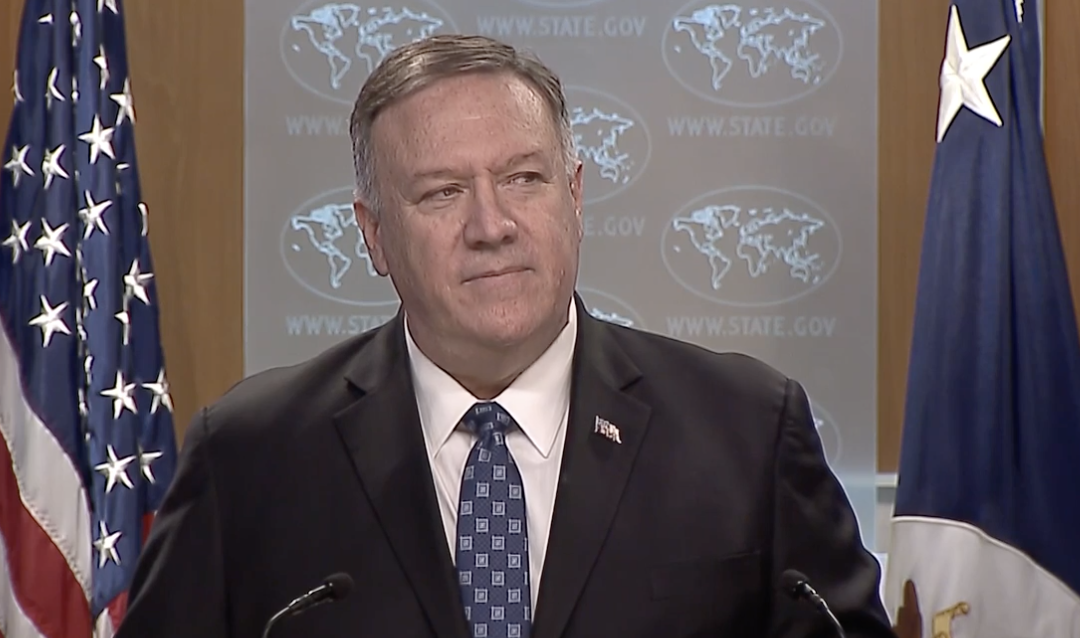 The U.S. Secretary of State Michael Pompeo announced on March 2 that five Chinese state media have to reduce their reporters and other personnel working in the U.S. (credit: U.S. DEPARTMENT OF STATE)

WASHINGTON — Since the beginning of this year, when China and the United States started restricting each other’s correspondents, and this week their simmering media fight reached a boil with new rounds of restrictions and, effectively, expulsions.

The Foreign Ministry of the People’s Republic of China stated Tuesday countermeasures against restrictive measures on Chinese media agencies in the U.S., with leverage of expelling more American correspondents, who will not be allowed to continue working as journalists in mainland China, Hong Kong and Macao Special Administrative Regions.

The Foreign Correspondents’ Club of China condemned this measure and said, “There are no winners in the use of journalists as diplomatic pawns by the world’s two pre-eminent economic powers.”

“China is overtly using its powers in an attempt to influence overseas news coverage,” said in the latest statement from the Foreign Correspondents’ Club of China. And China punishes “those who publish information authorities see as unfavorable and wish to keep quiet.”

In January, the Chinese authorities expelled three Wall Street Journal correspondents from Beijing in protest of an opinion column in the Wall Street Journal written by Bard College professor Walter Russell Mead with a headline that referred to China as the “sick man of Asia.”
China’s foreign ministry declared that “the Chinese people do not welcome media that publish racist statements and smear China with malicious attacks.”

The Wall Street Journal’s news and opinion operations are separated and that the Mead column was produced separately from the three suspended reporters who worked for the Journal bureau in Beijing, Journal Publisher and Dow Jones CEO William Lewis said.

“The action taken against The Journal correspondents is an extreme and obvious attempt by the Chinese authorities to intimidate foreign news organizations by taking retribution against their China-based correspondents,” a statement from the Foreign Correspondents’ Club of China said.

Chinese authorities’ action was deemed a retaliation for the Trump administration’s talks of designating major Chinese media outlets as government entities. The State Department also cut the number of Chinese state media personnel allowed in the U.S. from 160 to 100. State Department officials urged the Chinese media companies to call their journalists and other personnel back to China.

The latter move, China’s foreign ministry said, smacked of “the political suppression of Chinese press out of a Cold War mentality and ideological prejudice.” The ministry also condemned the U.S. policy of issuing only one-entry visas for Chinese correspondents.

There is no doubt that the freedom of reporting in China is deteriorating.

Chinese authorities have built up a new social model in China to control news and information. Besides tracking reporters and sources, even online surveillance of its citizens. China ranks 177th out of 180 countries and territories, according to the RSF World Press Freedom Ranking 2019.

Qiushi Chen, a Chinese activist and citizen journalist, has been arrested and detained over a month. As a journalist, he insisted on updating his YouTube, Twitter and some Chinese social media accounts while covering coronavirus in Wuhan, where the coronavirus started. His families said the authorities told them the reason for the detention was “quarantine.”

Before that, Chen provided firsthand coverage of the Hong Kong protests, posting online videos about protests on YouTube and Twitter. He also criticized the Chinese government for defining the protesters as violent rioters.

“As long as I’m alive, I will speak out what I have seen and what I have heard,” Chen said. “I’m not afraid of dying.”

In the Reporters Without Borders’ 2019 worldwide round-up report, the number of arbitrarily detained journalists in China has risen 12% from 2018 — 389 journalists are in prison.

Many Chinese and foreign journalists have run afoul of the government for reporting about human rights in Xinjiang or criticizing the Chinese government.

A Chinese freelancer, who has been posting videos and opinions about the current situation under the coronavirus of Xinjiang on Chinese social media platforms, got warning phone calls from the Chinese authorities.

“I will still try my best to do whatever I can do for the vulnerable people,” said the journalist, who spoke on the condition of anonymity.

Some Chinese reporters who covered the first outbreak of coronavirus in Wuhan were detained by the local police for a few hours.

“I was scared and cannot stop crying,” one of them said on the condition of anonymity. “My story cannot be published until the officials announced this outbreak.”

Instead of speaking out in public, these reporters who work for Chinese media insisted on being anonymous to give more details about their daily work. All of them called it “paid silence,” because once their companies or the authorities track them, they would lose their jobs or even have some other “issues.”

“I have to protect my families and myself,” one said.

Harassment, intimidation, surveillance and detention are also hitting journalists working in Hong Kong, the former British colony that has enjoyed more freedom than mainland China since becoming part of China in 1997.

Guohao Fu, a reporter from the Chinese state news outlet Global Times, was assaulted with umbrellas and tied up by the anti-government protesters at the Hong Kong airport last year. And another reporter with Stand News was hit when he was filming a protest.

According to the RSF World Press Freedom Index, Hong Kong has plummeted from 18th in 2002 to 73rd in 2019 for its treatment of journalists.

“Different from conflict zones, journalists reporting in some peaceful countries and areas face a higher level of threats,” said Saoria McCabe, who is a specialist from the division for freedom of expression and media development of the United Nations Educational, Scientific and Cultural Organization, “In response, journalists are creating networks to share their sources and materials through the investigations.”

If a journalist was killed or detained, others could continue the investigations and protect sources, she added.

“The first rule when covering sensitive topics in China is not how to protect oneself, but how to protect your sources, as well as any Chinese nationals you work with,” said Gady Epstein, who is former Beijing bureau chief and China correspondent for the Economist. “That means a foreign correspondent needs to practice good security hygiene in communications, on electronic devices, to minimize the chance that sources can become identified.”

“To the greatest extent practicable minimize your footprint in relation to sources,” he added, which is including keeping sources’ private information in anonymity, and changing hotels regularly when traveling.

John Pomfret, a former Washington Post bureau chief in Beijing, was expelled by the Chinese authorities in 1989, because he covered the Communist Party’s crackdown on student-led protests on Tiananmen Square. In 1997, Pomfret was allowed back to China and to lead the Washington Post’s coverage.

Pomfret said January’s expulsion of the Wall Street Journal’s reporters was part of a campaign by the Communist Party to foist responsibility for what it called the “counter-revolutionary turmoil” on the U.S.