Little Italy gets littler by the day 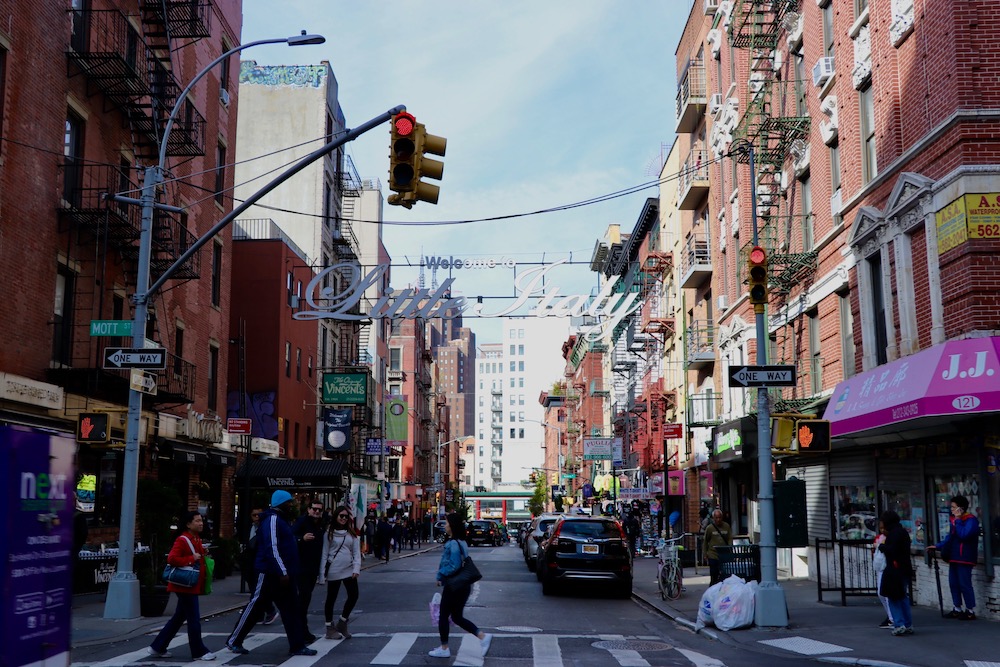 NEW YORK — Little Italy in New York City is becoming littler and littler. The once 50-block, vibrant Italian neighborhood is now reduced to a few quiet streets in Lower Manhattan. As rents spiked, longtime Italian-Americans have moved away and integrated into American society.

“Little Italy is very transient nowadays, people are coming and going,” said Jerilyn Danza, a third-generation Italian American who has spent her life making fresh ricotta and mozzarella at Alleva, the oldest cheese shop in neighborhood.

“They used to come here and settle, have their businesses etc. You don’t see that anymore – nobody really raises families here anymore,” Danza explained.

In the 1920s, when Italian immigration surged in the U.S., over half of the 10,000 people living in Little Italy identified as Italian American, according to the United States Census Bureau. Back then, the neighborhood spanned about 50 blocks, from Houston Street to Worth Street and from Lafayette Street to the Bowery. The area quickly became Italian in character as the new residents, store owners and street vendors filled it with their language, traditions and products.

Today, Little Italy merely stretches over three blocks of Mulberry Street, between Canal and Broome Streets. According to a United States Community Survey, in 2011 the proportion of Italian-Americans living in the area had shrunk to about 5 percent.

As rents have escalated for years, Italian immigrants have been progressively forced out of the neighborhood. In the early 1920s, a tenement apartment could cost as little as $10 a month, according to Joseph Scelsa, a sociologist, Knight of the Italian Republic, and founder as well as president of the Italian American Museum in New York City.

Today, the average condo price is $2.1 million, which makes Little Italy the area with the third-highest rents in New York City, according to a report by the real estate company Douglas Elliman. A three-bedroom unit at 133 Mulberry Street, where a luxurious condo replaced three tenement buildings that were once home to tens of Italian families, is on sale for $2.85 million.

“It’s become very fashionable to live there,” said Scelsa. “As a result, the prices are very high.”

Landlords and tenants are caught up in a perpetual fight over rent-controlled apartments, which have progressively decreased as units became stabilized or deregulated.

In the 1950s, 2 million apartments in the city were rent-controlled, according to a 2019 report by the New York State Division of Housing and Community Renewal. The number has now shrunk to 22,000, or just about one percent of the housing stock. Whilst tenants argue they cannot afford higher rents, landlords say they cannot run the buildings at those rates.

“That’s just the way the area has changed so much,” Scelsa explained.

Running businesses in Little Italy has also become increasingly expensive, with a typical storefront priced at about $20,000 a month. But when John Delutro opened Caffé Palermo 45 years ago, also known as Cannoli King because of its multi-flavored fresh cannolis, his rent was $75 a month.

Robert Ianniello, president of the Little Italy Merchants Association and owner of the famed seafood restaurant Umberto’s Clam House, is also struggling with rising rent. When his new landlord bought the building in 2014, it suddenly doubled to $34,000 a month.

“It’s a landlord problem,” Ianniello explained. “They think this is Fifth Avenue. They want to be your boss, not your partner.”

The restaurant owner is looking for a cheaper venue, but he has no intention of leaving the neighborhood.

“Of course, the new restaurant will still be in Little Italy,” he said.

The spike in rents is not the only reason why Italian Americans have been moving out of Little Italy: the traditional pattern of mobility in the American society has also played a pivotal role, with new generations naturally “wanting to do better than the previous ones,” Scelsa explained.

“The people, the quality of the culture was very high, but the standard of living wasn’t,” Scelsa said. “Apartment sizes were very small. People did not have bathrooms in their own apartments. They wanted some fresh air, sunshine, and bigger and more spacious living conditions.”

Today, the largest Italian population in the state of New York is in Tuckahoe, Westchester County, according to the Census Bureau.

The transition to other areas was also part of a joint effort by Italian-Americans to fight the racial discrimination they historically faced.

“They wanted to become more accepted, so they chose to move away from what we would call, in a very good way, ‘ghetto’ and integrate into the larger society,” Scelsa explained.

“They became American, they melted into mainstream America,” said Lou Di Palo, whose family has owned Di Palo’s, a small shop of Italian delicacies on the corner of Grand and Mott streets, since 1925.

“My job, my children’s job, my grandchildren’s job is to preserve the Italian culture as part of the American way of life,” he said.

In 2010, not a single resident of New York’s Little Italy was actually born in Italy, according to the Census Bureau. This reflects a larger trend of Italian immigration in New York City decreasing because of unfavorable immigration policies. There were 40,687 Italian immigrants in the city in 2018, down from 53,533 in 2010, according to the Census Bureau.

“Italians have contributed greatly to America, not only through their labor, but also through their intelligence and through their arts and culture,” Scelsa said. “People don’t realize that.”

Emelise Aleandri, an author on Italian history, said that the neighborhood remains a cultural touchstone for Italian-Americans.

“Right now, there is just enough of a population to keep up traditions,” Aleandri explained. “But it’s going to be more difficult to keep the area Italian if the merchants and businesses leave.”