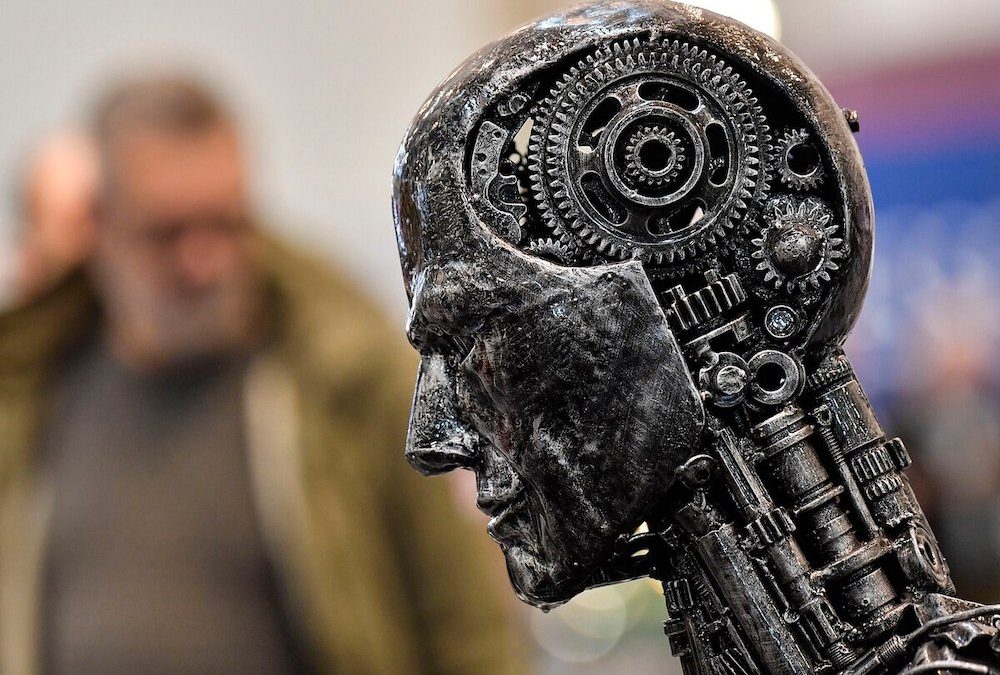 A metal head made of motor parts symbolizes artificial intelligence, or AI, at the Essen Motor Show for tuning and motorsports in Essen, Germany. (AP Photo/Martin Meissner)

A future where artificial intelligence controls Washington D.C. may not be far off, according to a new book from Peter Singer and August Cole: “Burn-In, a Novel of the Real Robotic Revolution.”

Like the authors’ previous book, “Ghost Fleet: A Novel of the Next World War,” “Burn-In” is a blend of fiction and facts that explore how technology will shape the future. The science fiction thriller showcases over 300 technological trends that the authors believe will push the United States into a new industrial revolution. The story revolves around an FBI agent and its robot partner working to stop a cyber-terrorist who has taken control over the nation’s capital.

Singer, a strategist and senior fellow at the non-partisan think tank New America, spoke with Chiara Vercellone about what inspired the book, the response from officials and how the duo researched it.

This interview has been edited for brevity.

C4ISRNET: This novel blends fictional characters with extensive research on what technology might be like in the future. You show how AI might have an effect on everything, from politics and economy to our society. Why is this realistic in such a short amount of time?

SINGER: We conducted research on everything from compiling the reports on which jobs will be automated, to Amazon patent applications, to interviews with AI scientists, but also people who worked on the water system of Washington D.C. We even did site visits to inside the White House.

We used that to essentially project forward not just how AI and robotics are going to be used in your city, your business and your home, but also some of the, frankly, scary new vulnerabilities and trends that they are going to introduce. What are some of the security threats that we’re going to be wrestling with, whether it’s in your home or how you think about it for an entire city?

C4ISRNET: The book is set 20 years from now. Is that the right time frame for the development of all encompassing AI?

SINGER: We had a “no vaporware” rule. Every single technology, every single trend, every single scene in the book had to be pulled from a technology project that is already in motion right now: A technology that already exists or a research project that is already happening, a cyberattack that may not have happened in the U.S. but has happened somewhere else, or has been something that researchers have proved is possible. And, honestly, that kind of grounding, frankly, makes it even more compelling and scarier.

C4ISRNET: As artificial intelligence can be used for good to help defend against cyberattacks, it can also be used to carry out these attacks. As the book shows, the FBI uses AI to solve cases more efficiently but D.C. has been taken hostage by a cyberterrorist using the same technology. Are there any risks that officials are taking today in funding the development of this technology?

SINGER: I think of when we got computers and they’ve move to a point where we don’t even kind of notice them around us anymore. When you go into your kitchen, there are tons of little red lights of different things that are computerized, but we don’t think of them as computers anymore.

Relative to AI, so much of the attention has been on this revolt of the robots. But one of the things that we play with in the book is that we’re seeing all these applications, but we’re also not preparing our economy and our society for these changes that will come. Industrial revolutions are really traumatic: We’re going to see everything from job displacement to new political ideologies, even extremist ones, and we’re not preparing for that. Even more directly related to the development of AI, we’re recreating almost all the mistakes that we made with the regular Internet a generation ago. Even if the internet brought a lot of incredible things, we didn’t think about security and the development of it, and that created a lot of consequences. And we’re doing the very same thing right now, as we wire up our cities, our homes, into what is now an Internet of Things and an increasingly AI-fueled Internet of Things.

C4ISRNET: You and August Cole have been invited to brief the book’s lessons to officials at the White House, Congress, CIA and at the Pentagon. What were those conversations like?

SINGER: For our past book, “Ghost Fleet,” we got to do everything from White House briefings to go to the Joint Chiefs conference room inside the Pentagon, and the Navy now has a $3 billion shipbuilding program that’s called Ghost Fleet. And the same thing has happened with “Burn-In.” Even before it was published, we were able to brief some of its lessons to groups like the Joint Special Operations Command to the NSA and Cyber Command and as you and I are speaking right now, there’s a new government report called the Cyber Solarium Commission. It’s a bipartisan commission, and they issued a major report of ways to reset U.S. cybersecurity strategy for the future. And it actually begins with a scene written by August Cole and I. So, in many ways, Congress has taken the world of “Burn-In” and moved it into official government reports. They wanted a way to share real cyberthreats, and what they didn’t want to happen is what happened to the various reports before 9/11 that warned about the attack but that nobody listened to until after the fact. So, they asked us to help with visualizing that world with the idea that it might emotionally compel them to not make the same mistake.

C4ISRNET: What was the process of deciding which technology was developed enough to think it could become a threat in the future?

SINGER: We would first build up a baseline of understanding and try and draw upon the wisdom of the crowd. For example, when we were looking at the question of which jobs are likely to be automated, we actually built, as far as I’m aware, the first data set that brought together every job prediction report, around 13 different predictions in total. It included everything from what the World Bank says to what consulting companies say. That gives you that factual grounding, and then you have to put your fiction hat on and you say, “okay, of all of these, which ones are not just the most important to talk about, but are the most interesting and compelling to talk about.” So the husband of the main character is a way that we use to illustrate that many people when they think about automation, they think about a factory worker or losing their job or maybe a truck driver, something blue collar but the data shows that it cuts across not just blue collar, but also white collar. So, we chose to make the character, a contract lawyer who’s been automated, and that’s not just to show that white collar jobs are at risk here, but it allows you to have that character hit some more compelling human themes.

It’s really interesting what happens when you read the reports and plans but also talk to not just the Silicon Valley engineers, but all the way up to the billionaires, is there’s this incredible and rightful excitement at the world that they’re creating. But there’s also sometimes a failure to appreciate that their Utopian visions can sometimes seem very dystopian to other parts of society. And you can see this for example, with facial recognition, where they’ll talk excitingly about how you’re going to use it in a restaurant and use it in a train station, and all the money that’s going to be made. And then you pull back and think through everything, from how will the government use this? How do people with a different point of view that the police think about mass scale of face recognition? How does this change on our personal relationships? You think it’s great that the greeter to the store will have automated face recognition, and that they’ll be able to call me by name as I enter. But how am I going to think about that person? Am I going to think of them as friendlier or is it just the fact that I know the computer gave them my name? The visions of the future can be Utopian, but it can also feel really creepy in other ways.

C4ISRNET: How long has this book been in the works?

SINGER: The timeline from when you provide the final version of the book to the publisher, and then when it actually comes out in the stores is about nine months. So, we turned in “Burn-In” in fall of 2019 and it’s coming out in summer 2020, and that’s just the way the book business works.

The challenge of this blend is that there are so many things that that were happening, that are actually a scene or a moment from the book. We would start tweeting them out, calling him a #BurnInbookmoment. And sometimes they were something that was cool and exciting maybe a robot that we write about in the book actually being deployed. But sometimes it was something rather scary, a certain kind of attack that had been researched now actually starting to happen.

In the longer term, there might be a problem with the technology in the book. I’ll give you a an example: In one of the scenes, there is a drone, and it’s pretty clear it’s an Amazon drone that flies overhead but we don’t name if by company, but we describe it and it has a footnote it’s Amazon’s patent for the drone. We didn’t dream up that it had this number of rotors, but this is Amazon’s literal plan for it. Now, five to ten years from now, Amazon might change that plan, and they may plan for it to be a six-rotor trial and it turns out it’s a four-rotor trial or something. That’s where the technology could be thrown off in time, but we were pretty careful.